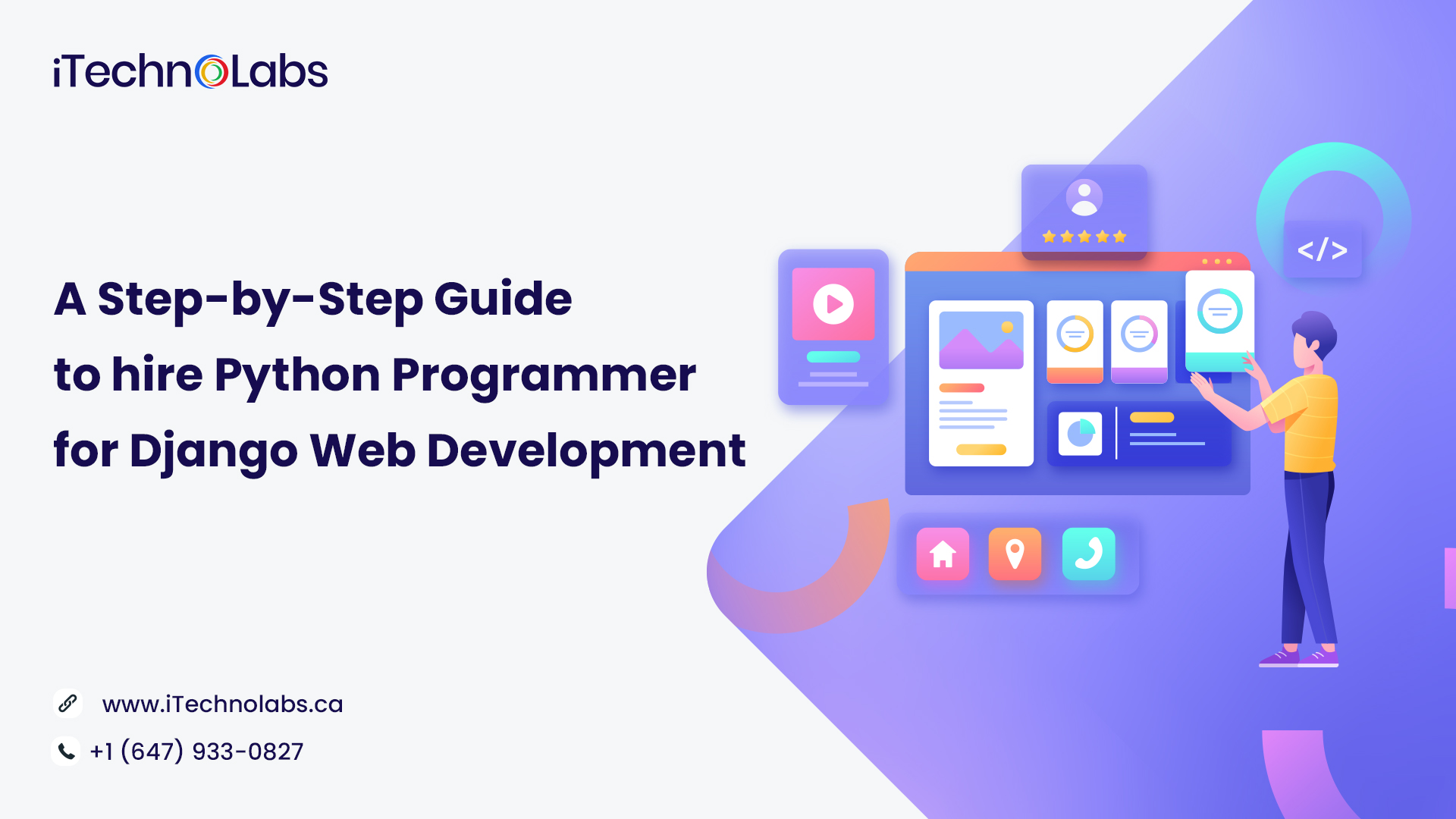 Websites are becoming the core for businesses that want to grow in the market and increase their visibility. The best way to do this is to ensure that everything is working at the first step, including hiring a Python Programmer that can help in developing functional applications.

A well-built website makes it easier for the audience to reach out and obtain the necessary information. It is the best way to promote the product or service and establish the market value for the brand. However, one needs a proper business plan that can help develop an efficient application.

When it comes to developing an application, companies usually go for the one that can help them grow, have an appeal, and is faster. Keeping these points in mind, Django development is considered a go-to solution for businesses.

Python Django developers are in-demand due to their ability to develop apps that can help companies grow in the market. Let us walk you through all the significant aspects of hiring Python programmers.

In 2005, Django was developed as a Python-based framework and open-source software. It performs. It works via Model View Controller (MVC) and is famous as an architectural template. The templates come as three elements in an accessible way to indicate the data emphasize UI, and show output, respectively. It is becoming a major way to empower development and work on the idea of pluggability and reusability. Along with this, Django offers minimum coupling, lesser codes, speedy development, and high cohesion.

Due to high cohesion, it is possible to understand the efficiency of Django components and the purpose they are used for. It is written briefly and is functional, making it an ideal choice for the companies to hire Python programmers that know Django. Consider this as covering two significant aspects with one hiring.

Python Django developers can develop websites easily using Django frameworks. It promotes reusability and pluggability, making it the go-to solution for the developers. One who has complete knowledge of Django and Python can efficiently work on the website and develop with manageable code. The developers should understand the basic understanding of object-relational mapper, object-oriented programming, and RESTful APIS to start website development.

It makes it easy to handle objects via classes and model real-life circumstances. The uncomplicated techniques make sure to increase the quality of the website and easily integrate with major elements. It is best to understand that Django Python is an in-demand programming language that one can easily incorporate and is versatile. 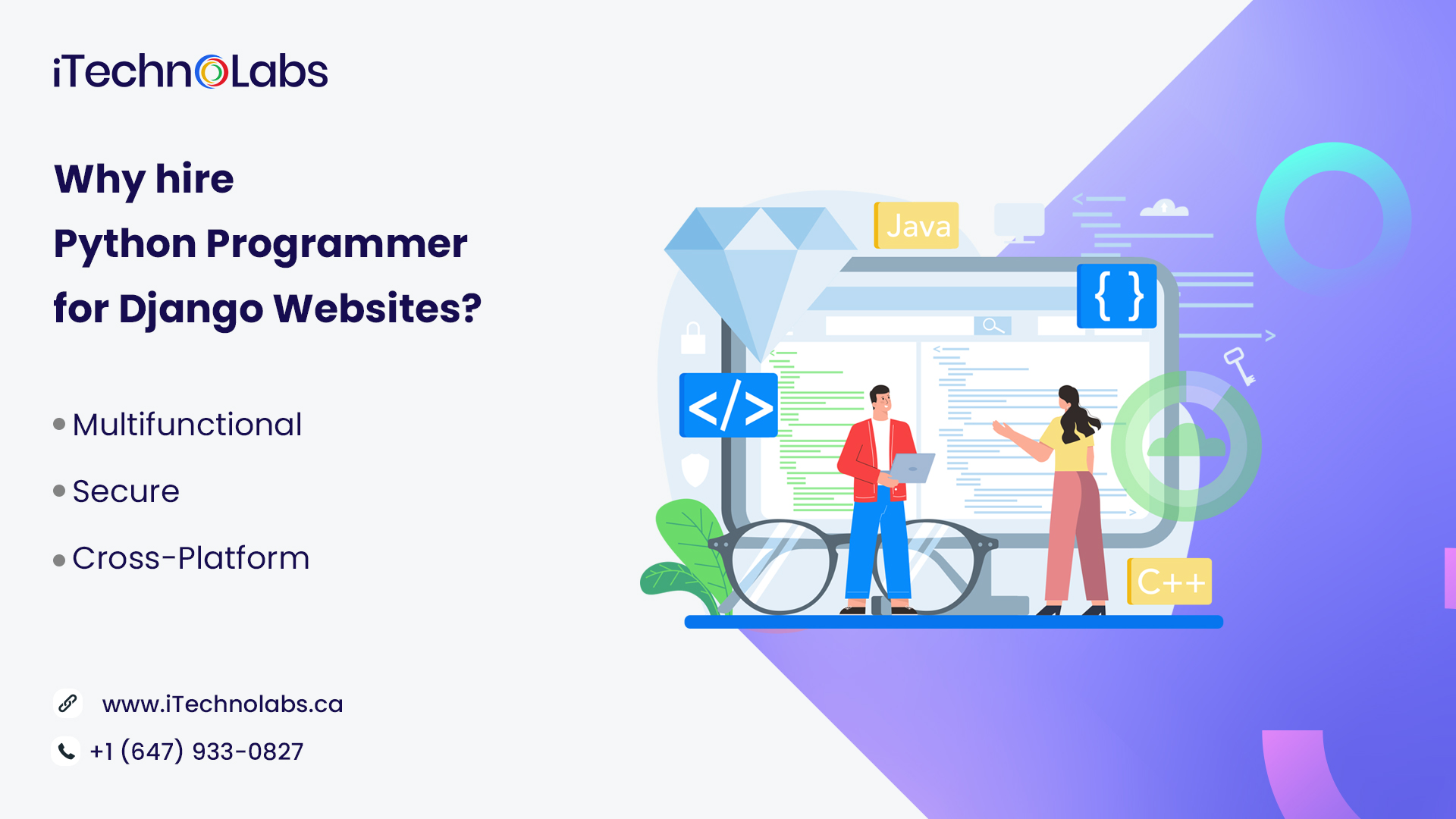 The developers can easily determine the originality of the website easily and quickly. The framework calls upon the unique website without complicating any code that may impact the quality. It is best to know that Python developers are a good choice, but a Python developer who knows the way around Django is the best one.

The company hire Python Programmers for Django as they have the experience to work with multifunctional applications and websites. Using Django features, Python developers can come up with ideas for any website or Customer Relationship Management for any industry. It includes a property evaluation system, social media sites, document management processes, healthcare patient records, etc.

If you know it, Django security is not much communicated with anyone. Django security is one of the key features that makes it the ideal solution with Django Rapid Application Development (RAD). It can cover issues like cross-site scripting, clickjacking, and SQL injection. Django can tackle the UI redress and clickjacking issues, preventing confidential data leakage.

Django quickly develops cross-platform projects for Linux, PC, and Mac. It can easily relocate applications across databases using a small piece of code without making any fuss.

Apart from these, the developers must be proficient with the Django framework and other frameworks like Flask, CherryPy, and Bottle (as you don’t know what you need next). This will give you an edge in the market as one Python developer can help you with most requirements. It will eliminate the time spent on the operations like URL routing, session storage, and web security.

On top of that, Python comes with a vast collection of libraries that developers can use, eliminating the requirement of complex coding for website development. It comes with more than one lakh libraries like SQLAlchemy and Numpy used to create applications for data science, machine learning, data visualization, etc.

ORM libraries are another big thing for the Python developers making it easy to modify the storage using the programming language faster and more efficiently. The libraries include Tortoise ORM, PonyORM, Peewee ORM, and Django ORM. 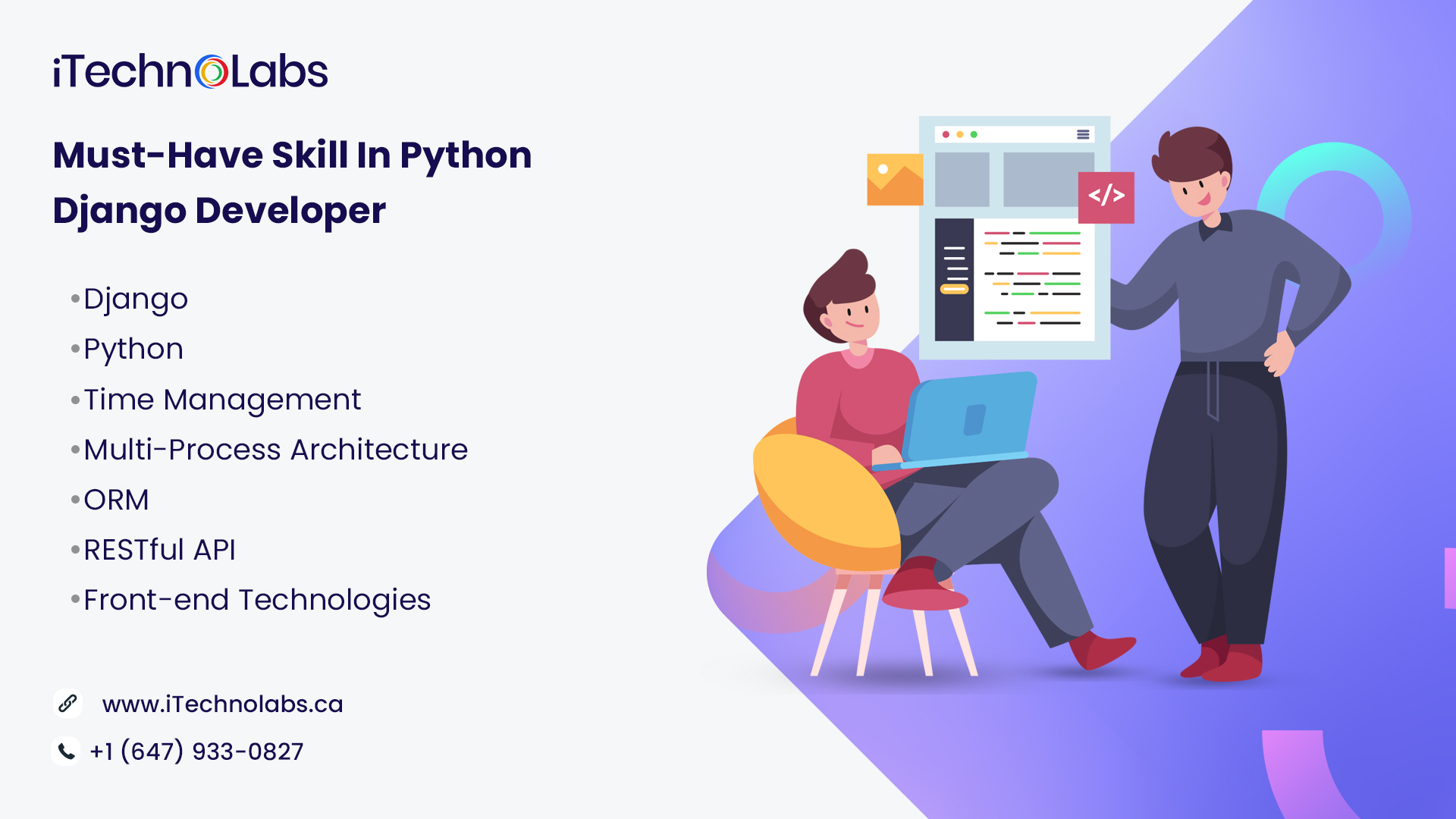 If you are hiring a developer for Django, it is essential to get one who is trained in the platform. Knowing the major Django framework and components is a must for the developer, along with major tools.

Python developers having no experience or knowledge about Python can’t be a good fit. One needs to have a good understanding of object-oriented programming language and objects and classes to ensure that they can work on the development process.

The most crucial aspect that any employee should be aware of is time management. If you can’t manage your time, you need to analyze several things. Django Python Developers are not much different from any other developers. They need to prioritize issues, take responsibility for components, and handle any problems within deadlines.

Another primary requirement of Django Python developer is a multi-process architecture that works on different components from design to development, testing to debugging. It is best to ensure that the developers are aware of each phase and how to tackle any difficulty that may arise.

Object Relational Mapper is another major requirement that the developers are must-have. It is essential to work fluently with ORM to offer databases a safe and fast approach.

As mentioned above, RESTful APIs are the primary requirement for businesses while hiring Python developers. They need to know the PUT, GET, and POST calls while working on the REST architecture.

Python developers know about front and back-end development. Developers work on the back-end, but it is best to ensure they know their way around the front-end world. It can include understanding visual aesthetics and user interface that help them get the fundamental knowledge of development.

The developers must also have significant skills like communication as they need to connect with teams and clients. They must have an open mind, analytical skills, creative thinking, problem-solving ability, and curiosity to learn new things. 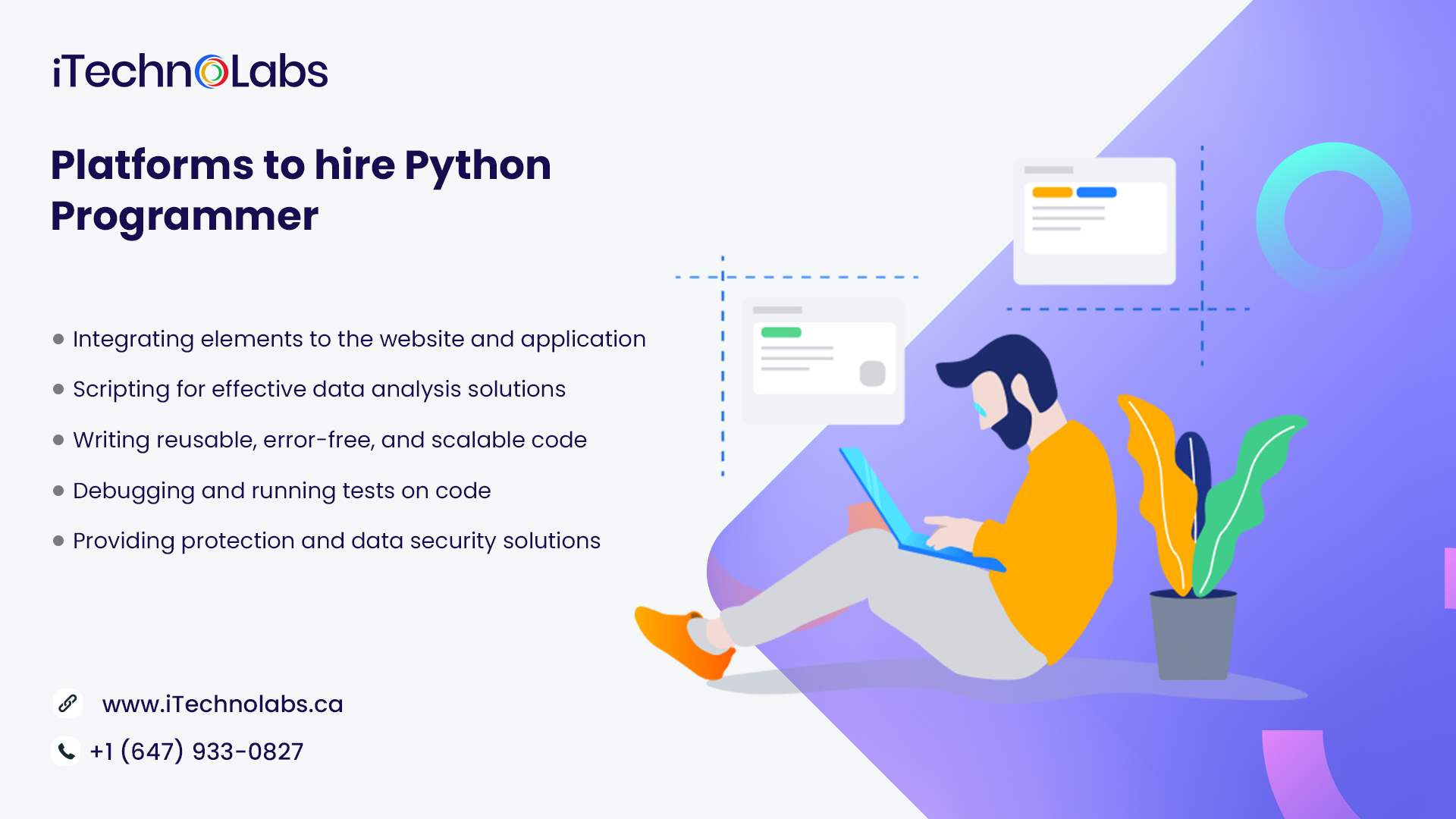 Now you know what to look out for when you plan to hire a Django Python developer. Next is to understand the significant platforms from which one can hire these developers.

Before that, one needs to know the major responsibilities that developers will be involved in:

An in-house developer can be from off-shore or in-shore that will work for you permanently. The developer will be responsible for all the projects associated with their key skills. Freelance developers are mainly hired for the respective project and a short period. They are hired based on their skills and charged on an hourly basis.

One can hire developers from websites such as Naukri, LinkedIn, Indeed, and Shine. Other than this, the companies can put the vacancies on their website career page where developers can apply for the position, and you can get started with the interviews.

Are you looking to hire Python Programmers for Django Web Development Project ? 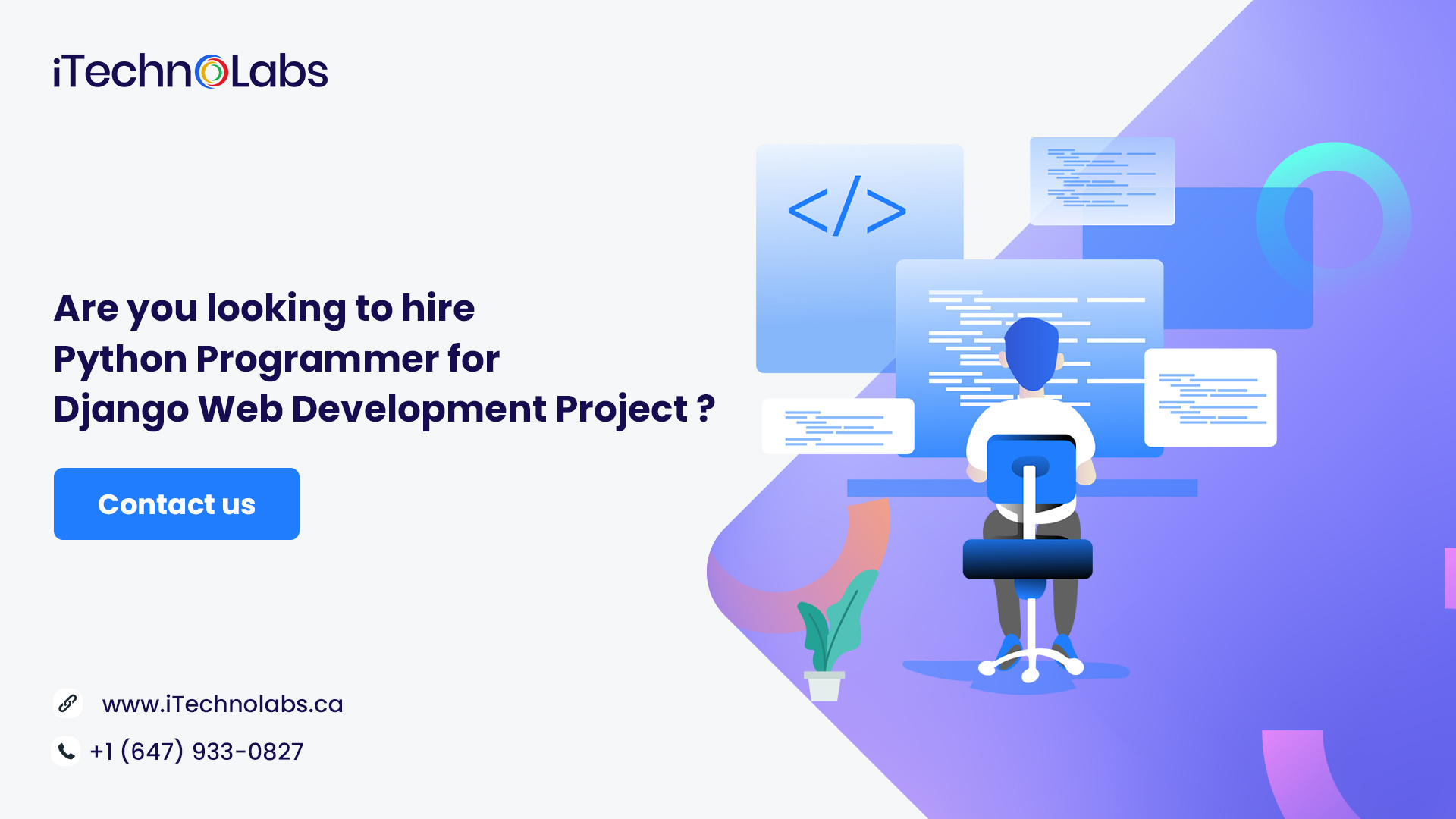 Companies need to hire suitable candidates who can take their projects to the next level. It is best to analyze all the significant aspects of hiring a Python Programmer for Django to ensure that nothing is left unturned.