8 Must-Have Video Editing Effects for your TikTok like App

8 Must-Have Video Editing Effects for your TikTok like App 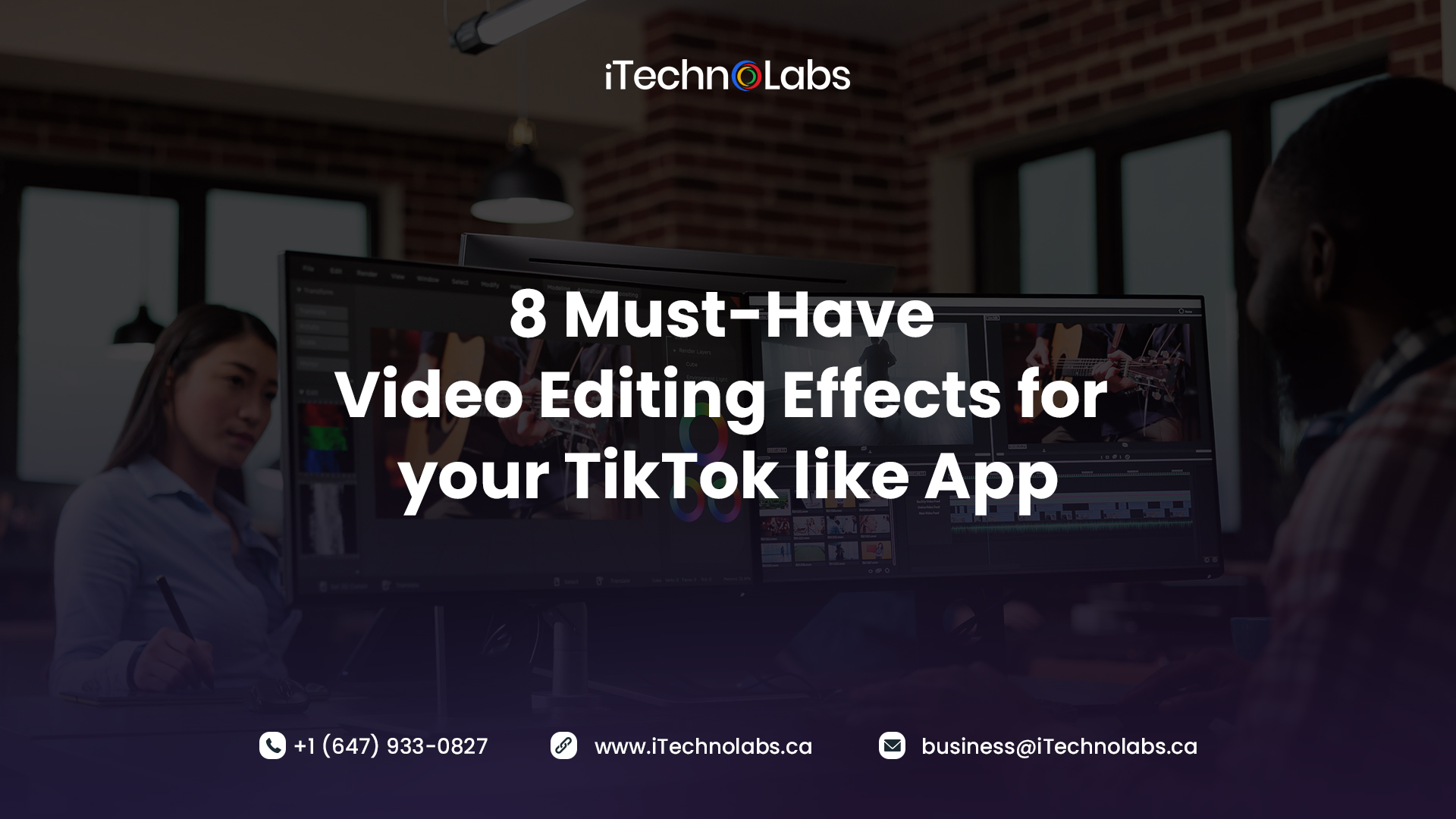 A famous person once said-“Edit your life furiously and effectively.” After all, it is your masterpiece, and we can view the best parts of it after editing the captured moments. Editing is just like giving life to non-living stuff. Like any other necessary work, video editing has become one of the important parts of our lives, especially for the ones who love to make and play with videos. Editing tools enable you to share projects of a better caliber, which one can use for sporting events or family functions.

Still, in the end, you need an outstanding editor for the final video. Video editing effects are an amazing option as it gives us reason to learn and increase our interest in videos and is also the key to getting emotionally connected to the videos. Let’s get some brief info about video editing effects.

Getting to know about editing in small degrees-

So, editing is a creative process that is almost the same as the process of manufacturing. In manufacturing, just like you transform the raw materials into different products in better ways, in the same way, editing transforms a group of videos or a single video into a better one. In this, your skills and interests matter a lot.

Although many still believe that making videos for movies and television is the most common job for video editors, this isn’t always the case! Employers typically hire individual video editors for certain projects due to the growing need for videos for educational purposes, sales presentations, and internal video editing roles in firms.

What are video editing effects?

Video editing effects are one of the most amazing things ever. These are the kind of filters that improve the shots you take from the camera. You can also create your effects and add them to your videos. Moreover, nowadays, everyone is dependent on video editing effects.

It can be both boon or bane for the users. Nothing to worry about if your video doesn’t turn out to be good; at least you can edit it by giving wonderful, unique effects. It’s all about engagement. With just a click, you can immediately change the whole scene. Usually, there are 5 stages of video editing effects: Logging, First Assembly, Rough Cut, Final Cut then lastly, the final one.

The process of video editing is creative and unique as it helps people to engage with their awesome ideas and prepare user-friendly content.

How do we bring these video editing effects into use? 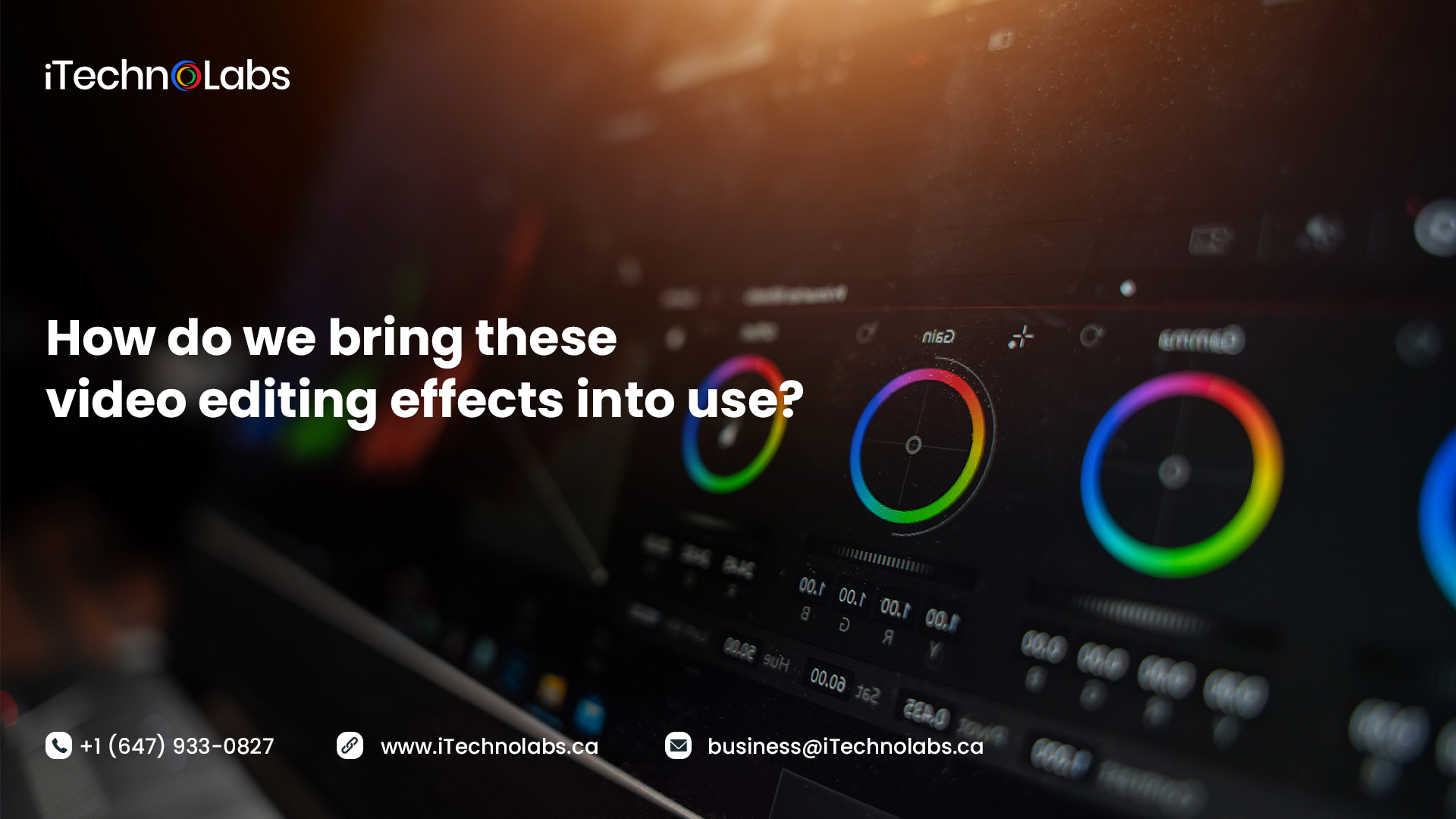 You can edit videos and add effects to them in various ways through video editing effects. According to your comfort, you can edit videos on both mobile phones, tablets, laptops, etc. Further, there are different types; there are built-in free and open applications like VN and Inshot, which can be downloaded from the google play store; others are mostly paid like adobe photoshop, etc., which professionals usually use.

Beginners can always start with easy-to-use build apps. Some of these are also not fully open as they have locked features. The effects are part of the video capturing and editing SDK (or API). AI video editing helps users create short video apps like TikTok. The actual SDK shows the modules consisting of various functions such as editing, recording, etc. Developers usually integrate all the features and finally, after the final finish, set their app to launch in the market.

The integration and storing of the features can be done in two ways, either through the built-in apps or through passing the effects using an AR cloud option. In the build in-app, the effect is already included in the coding of the application, so they can also be used without an internet connection.

The average weight of an effect is about 2, 5 MB. So the effects are also limited on the apps due to the size issue. So to avoid this kind of problem, you can undoubtedly go for the AR cloud storage, which gives you a large amount of space for storing the effects without making any changes or resubmitting.

The mobile video editing apps include: 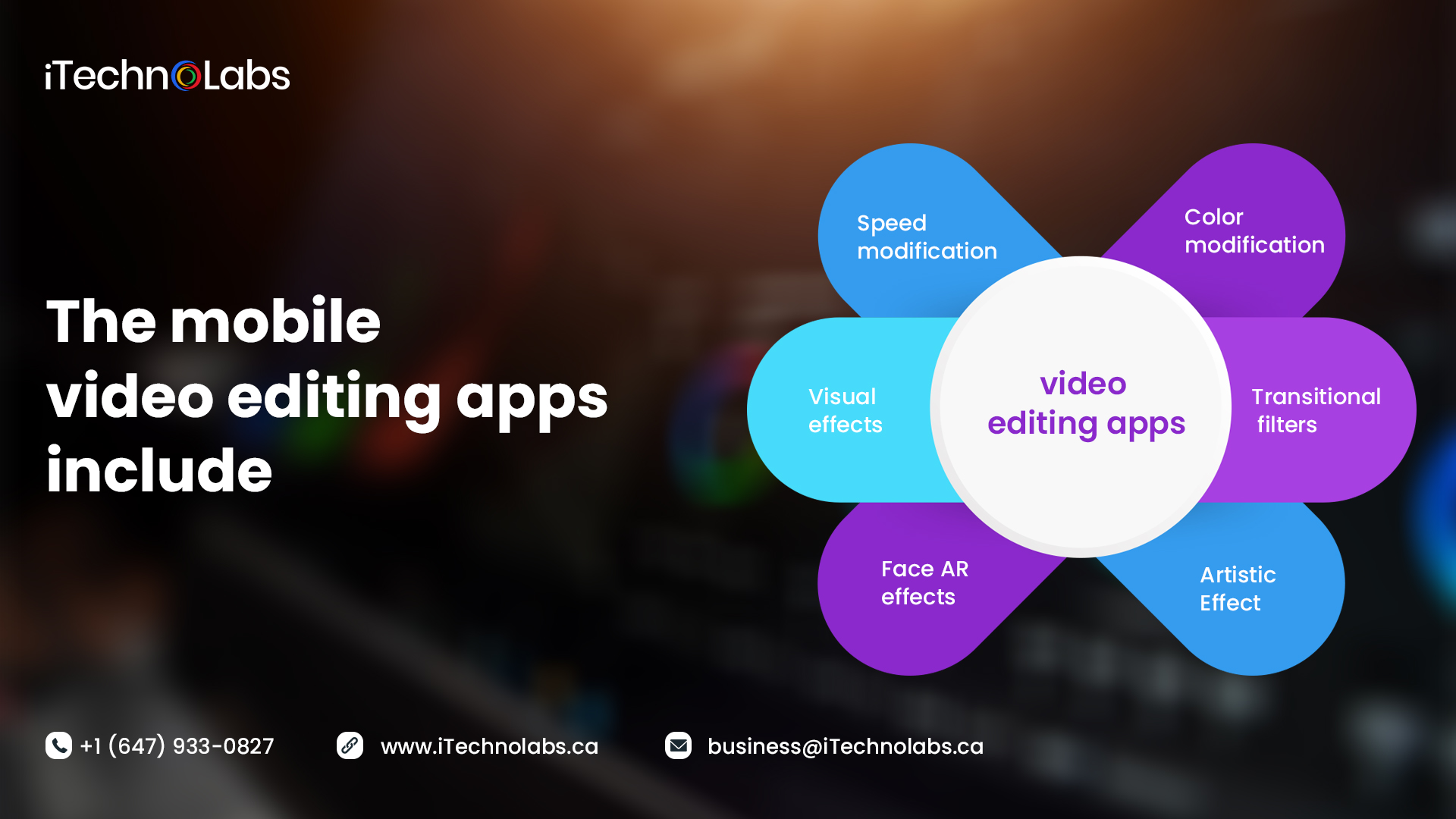 It modifies the speed of the video, which is one of your preferences, whether you want to speed up the whole video or slow it down.

It will improve the visibility of the video’s colors; now, it’s on you whether you want your video to look dull or bright.

It adds the non-existence things in the video and makes them fit like they had been captured in real life.

These are the filters that will make the connected videos look like a real single one.

This is basically about the real face in the video through the editing skills.

In this, the effect gives the video the effect just like the real artist gives to its masterpiece. With the upgradation in the industry, the technology has also developed so that you can change the video in whatever way you want, whether it’s changing of voice or the whole person. This sounds crazy, but this is what the century had improved up to. 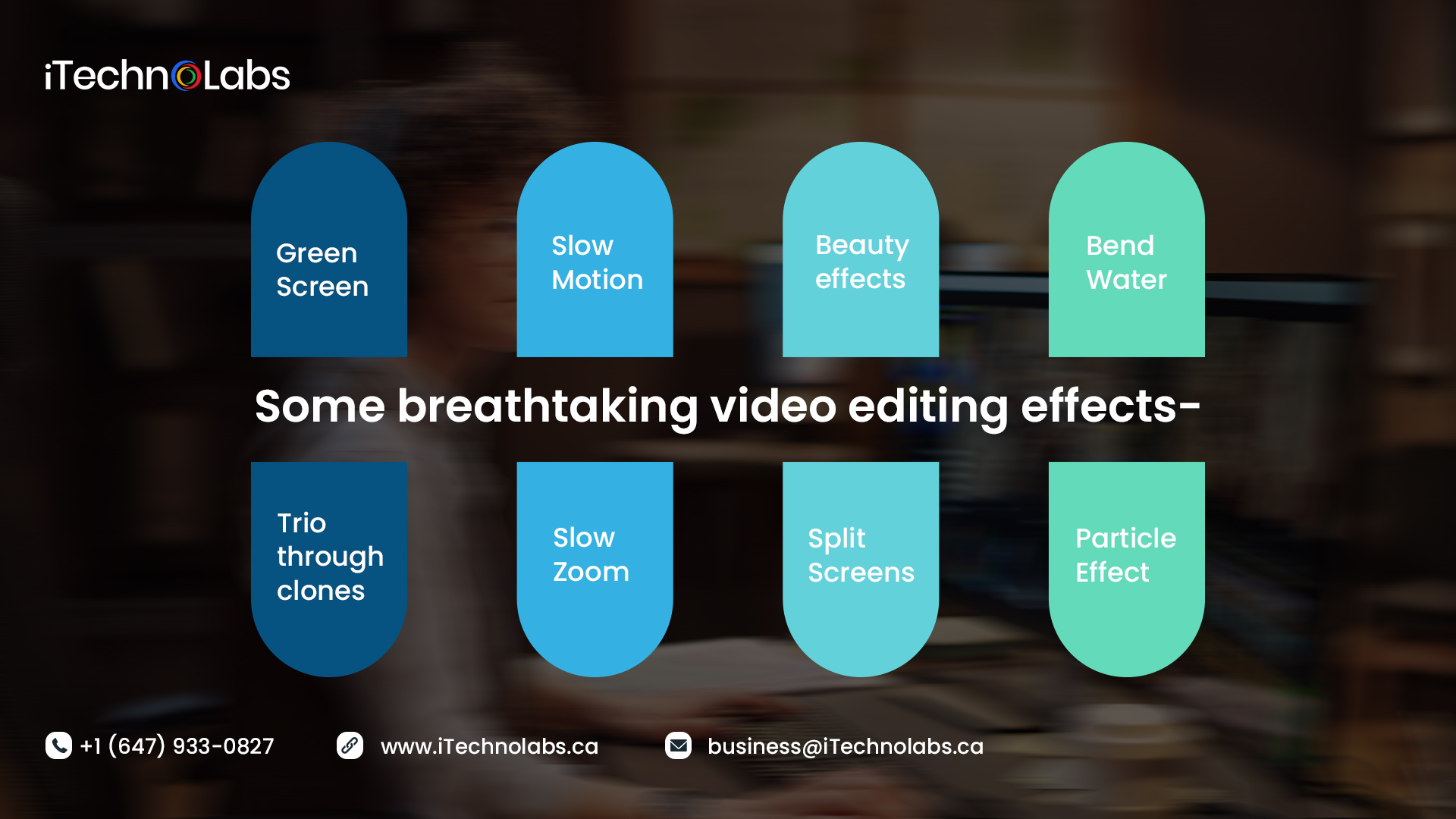 This is one of the most famous effects used by many influencers and is the first effect you’ll find that is easy to use, as it is usually trending, especially among teenagers. It allows you to change your background to any image you prefer to add to your video or even add a video as the background. People often use it to create a funny reaction and many more. Some of them also use screenshots for an explanation.

If you are good at dancing, then what are you waiting for? Use this trio filter, film various dance videos, and go for the challenges. It usually creates two copies of you behind you, who do the same things you do. This effect gives the feeling that you are dancing in your clone group and just doing the same thing.

Did I say slow motion? If yes, then oh my god, this effect has everyone’s heart? Using this filter will make you fall in love with your video. Using it for the traditional TikTok is going to do a lot and catch everyone’s eyes on the video. In this, you can see the video is automatically made at a slow speed giving you the main character vibes.

If you want to feel like you are the story’s main character, you should go for this filter that will give you the main character vibes without ignoring them. Slow Zoom makes the camera slowly and slowly closer and closer to your face without your need. It seems like someone is recording your video.

Who doesn’t want to look good without adding makeup? If you are a lazy bug, you should use this filter which will give you a complete makeup effect without any do.

In this, the screen will be divided into three or as many as you want. You can split it according to your need. This effect will give you total cinematic vibes without a do.

One of the incredible video effects you’d only expect to see in a high-budget film like Avatar: The Last Airbender is the ability to bend water, presumably by the strength of your thoughts. But you can make it yourself in After Effects, as its tutorial shows, and you should have a tonne of fun doing it.

To augment the outdoor hot weather footage for 2022, content producers are ready to start adding slight particle effects to the video samples.

Overlays can do particle effects, spreading tiny, realistic-looking particles around the target area. These effects give the outdoor film a cinematic sense and are perfect for scenes and subjects like the shore, a cornfield, a forest, etc.

Do you want to create a Video Editing Effects App For Your Startup? 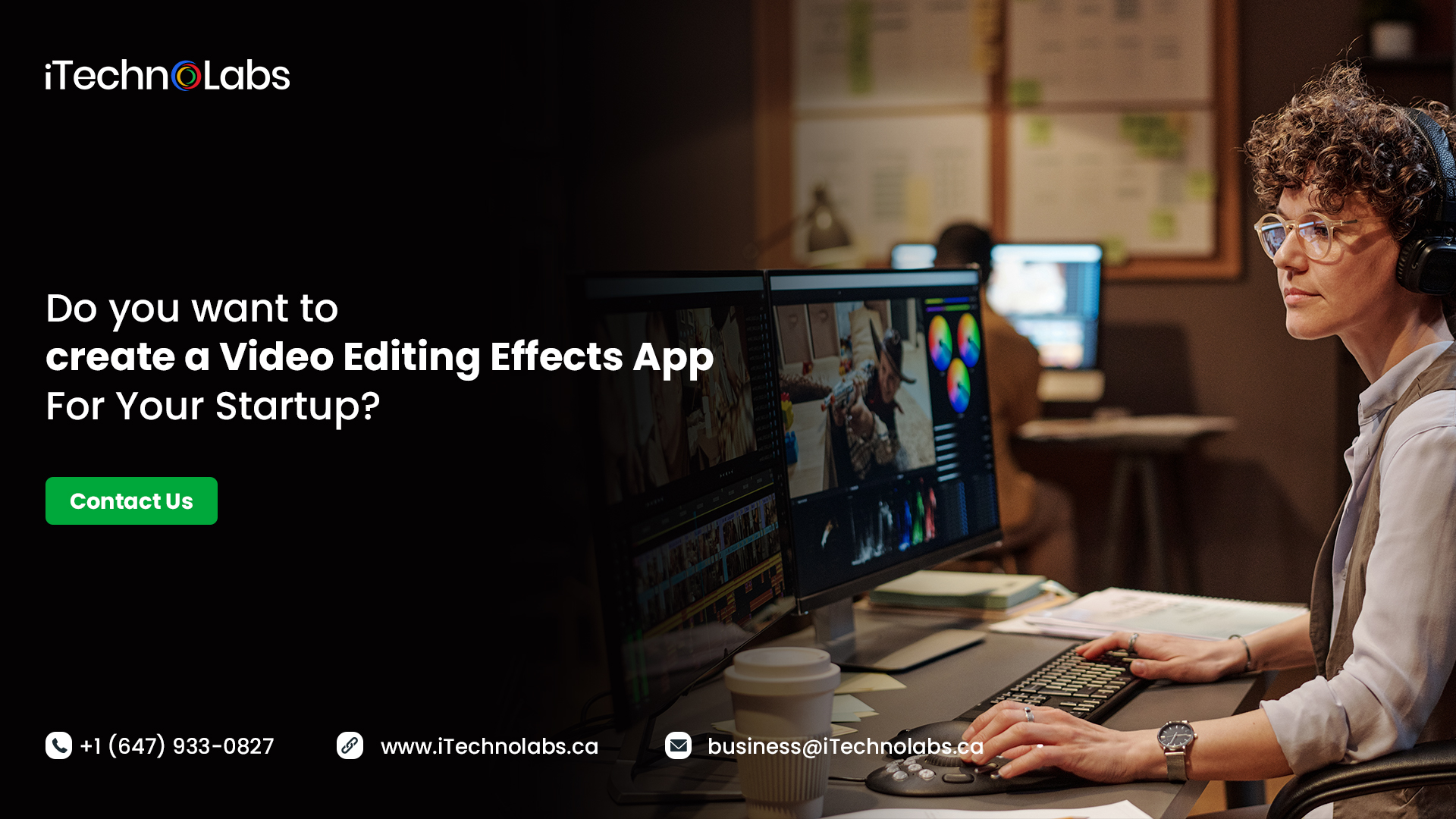 As stated earlier, you get better as you practice editing apps. You will progressively become comfortable with the ideas and tactics of video editing as you continue to edit. Of course, you don’t need a cutting-edge device or expensive gear to capture lovely films. Take a photo with your mobile and try your editing techniques. You can create a better-looking, high-quality video for every need.

The above video effects and hints will help you boost your editing skills. Also, if you are new to video editing, you can edit snaps for your social media life using video effects