A Complete Guide to Mobile App Development for Businesses

A Complete Guide to Mobile App Development for Businesses 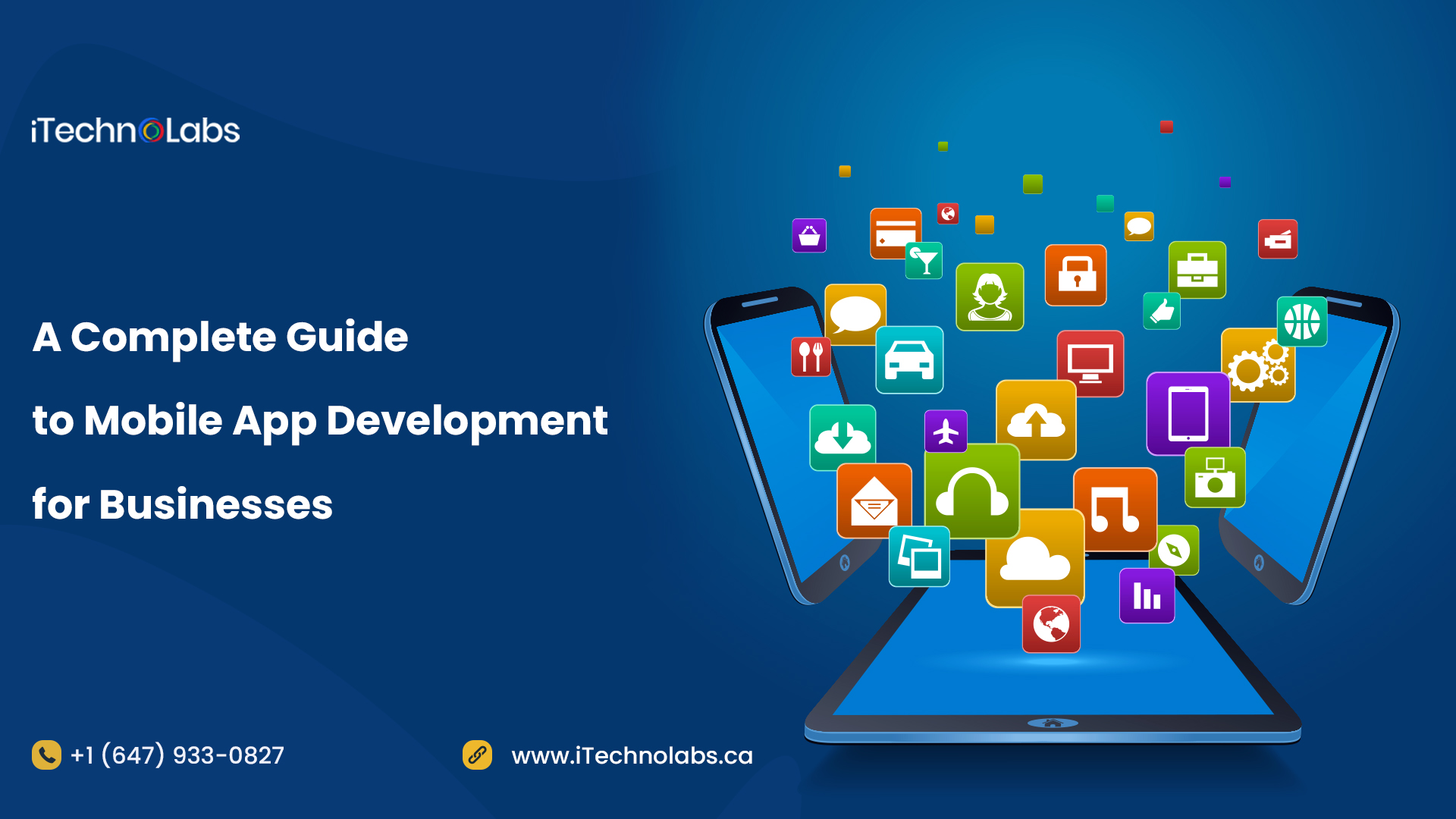 The mobile application development market is experiencing massive growth. In this ever-evolving digital landscape, Mobile App Development for Businesses is a golden opportunity for business owners and entrepreneurs to invest in mobile apps.

Statista estimates that mobile users downloaded approximately 27.8 billion Google Play apps in the third quarter of 2021. On the other hand, Apple App Store downloads accounted for about 8.3 billion. As a result, the mobile app market has experienced unprecedented growth and popularity.

What is Mobile Application Development? 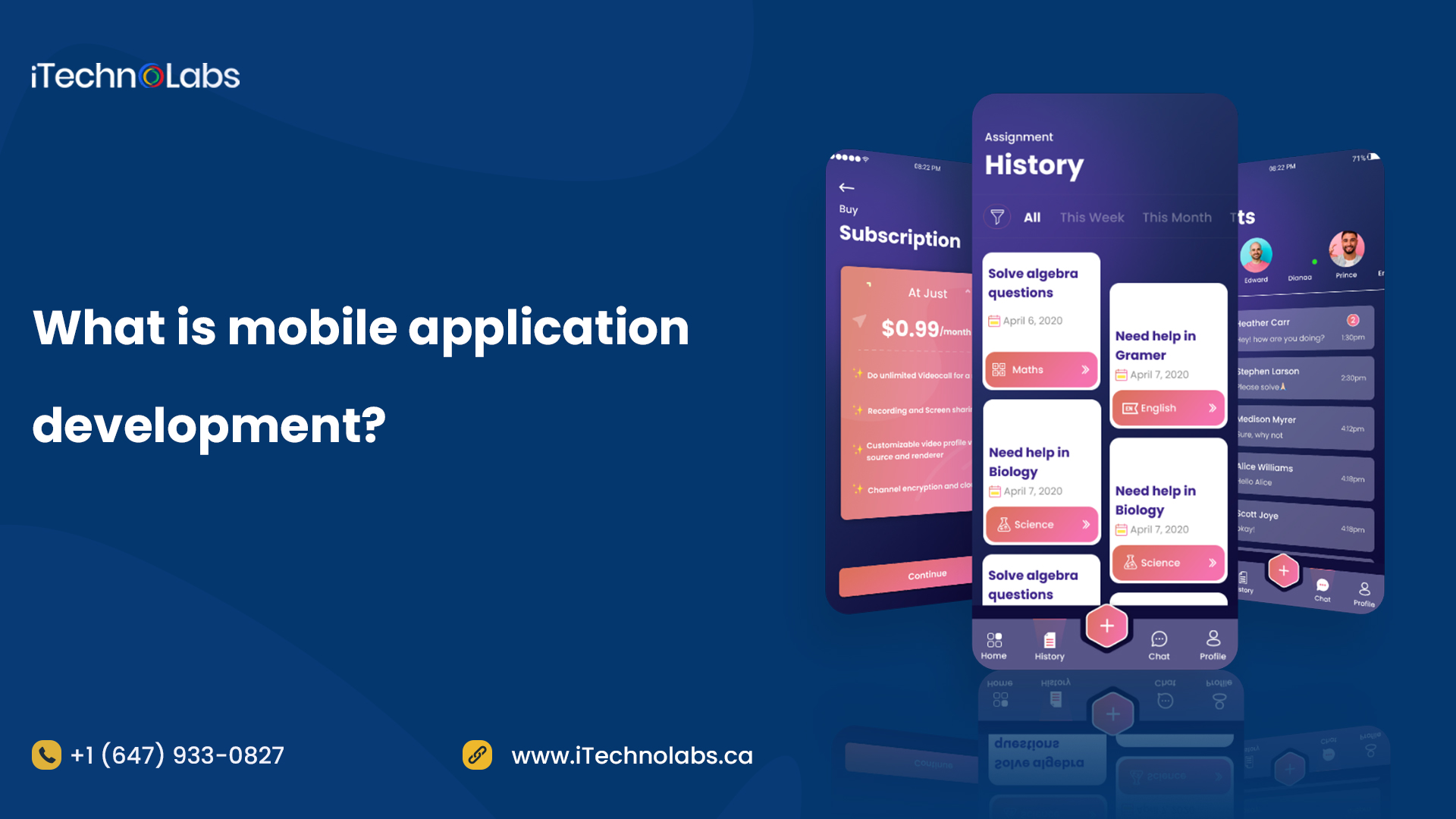 Developing mobile applications refers to processes and procedures involved in developing software for wireless handheld devices, such as smartphones.

The roots of mobile application development are similar to those of web application development. There is, however, one significant difference: mobile apps are typically developed to take advantage of the unique features of individual mobile devices. A gaming app might be created using the smartphone’s accelerometer, or a health app might be created using the temperature sensor in a smartwatch.

Apple’s iOS and Google’s Android are the two most popular mobile platforms. A full-featured web browser and Apple App Store come preloaded on Apple’s smartphones and tablets, and the Google Play Store allows you to install more Android apps from the Play Store. 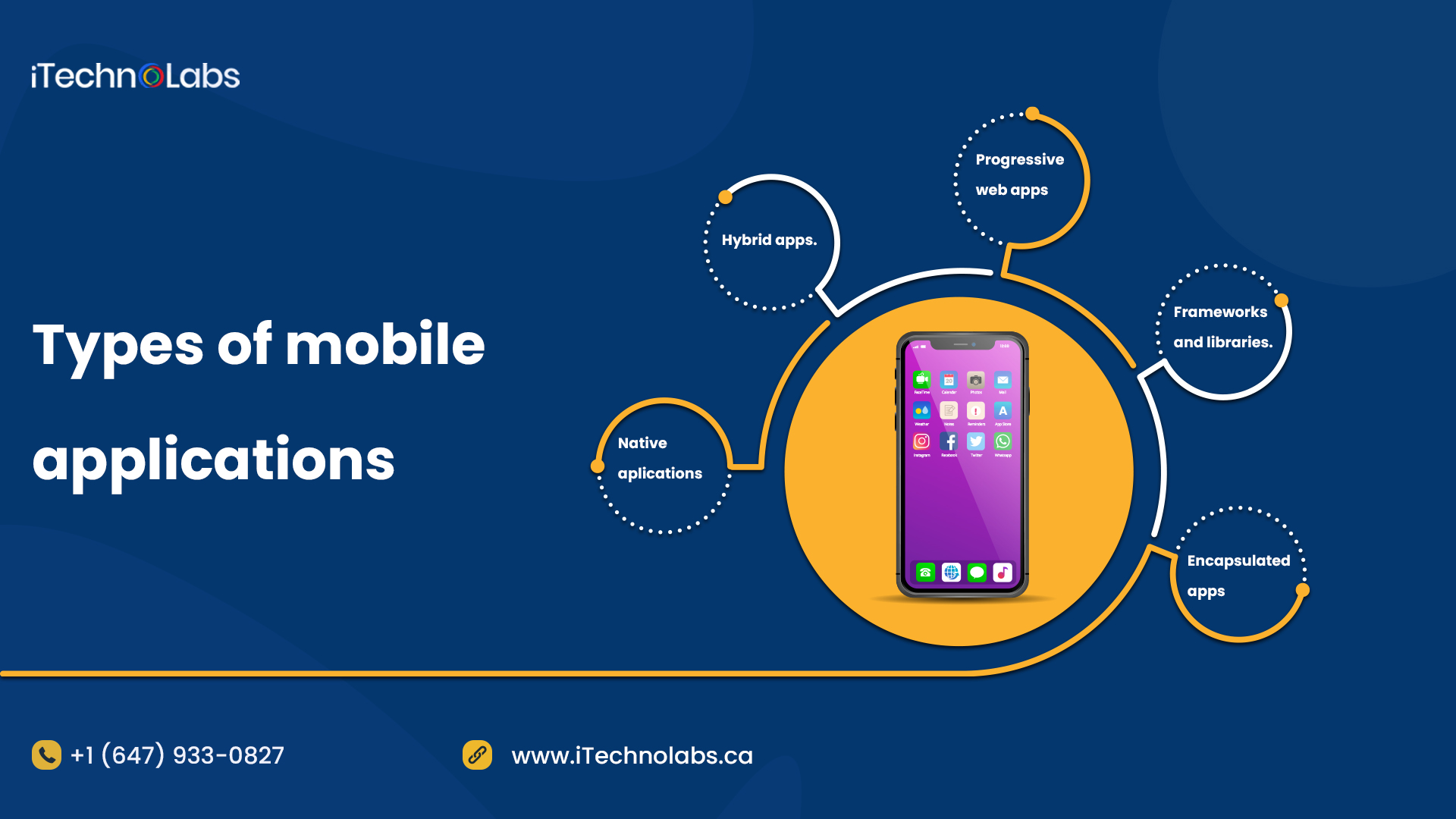 Apps had to be native to perform optimally on a wide range of devices in the early days of mobile apps. Because of this, each device’s processor required new code to be written. Mobile apps are increasingly device-independent today.

There used to be little or no reusability of code from the initial development work if an app needed to run on multiple operating systems (OSes). Mobile app development projects for each device needed their codebases. Most modern cross-platform tools enable you to share code across projects using languages like C# and JavaScript; they integrate well with tools for managing applications, such as Jenkins.

Developers can use one codebase for Google Android, Apple iOS, and progressive web apps (PWAs). Mobile applications are built to leverage the native features of mobile devices, so users will not have to visit app stores, download software, or make purchases. An e-commerce merchant does not need to develop native apps for all mobile OSes because a PWA can be found through a search engine query and accessed immediately.

The content of PWA websites is downloaded progressively, similar to YouTube videos, which means a better user experience than a traditional website that utilizes responsive design. PWAs are also known as instant apps. It is important to decide what type of app you will be developing before creating it.

The following is an overview of several mobile app development technologies.

What are the steps for developing a mobile application? 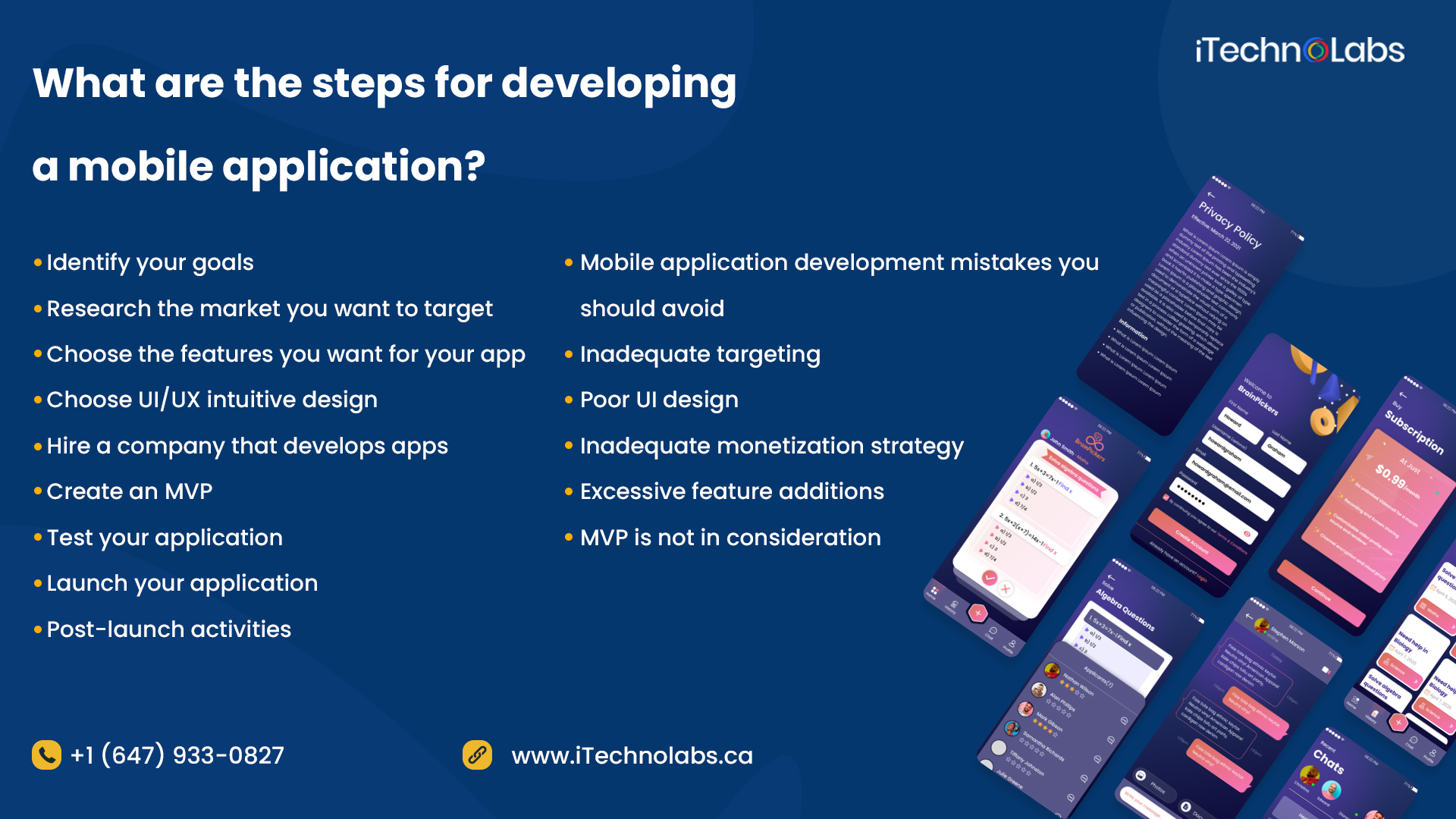 Here are a few steps you should consider before developing an app to give your business an edge. Don’t overlook these steps because they’re crucial to the success of your application.

It is imperative that you have clarity regarding your goals before starting the app development process.

What is your plan for achieving your goals? How does your application aim to solve a problem? our goals determine the development of your app. Once you get started building your app, it’s easy to get lost if these aren’t clearly defined from the beginning.

Instead of setting goals, set measurable ones. If not, you won’t be making the best use of your

time. The goals can be related to your business as well as the end-users. You should measure and track the success of each goal using KPIs.

Conducting research and learning more about your target market is imperative when developing mobile applications for your business. This will allow you to better understand consumer behavior, leading players, and market dynamics. You should also review user reviews for the top applications on the market. You will be able to develop a better product by doing this.

Understanding your target audience is also important. Find out where your users are located, how old they are, and what kind of devices they use.

The right features should be incorporated into your app. To serve your users the best way possible, you need to identify the features you need. Your app might seem attractive if it added popular features, but unnecessary features may frustrate your users.

Additionally, the more features you include, the more expensive and longer it will take to develop the mobile application. Therefore, early on in the development process, simplicity is the way to go.

When customers open your application, what’s the first thing they see? You don’t need to focus on the features of your app, but on how it looks and interacts with your users. This app is appealing to its users because of its user-friendly features and easy control. If the app users cannot apply its functionality in real life, it is useless. If this is the case, they will become frustrated and turn to another app.

UX refers to how a user interacts with a mobile app to complete or solve the purposes for which the app was designed. User interface (UI) is how your app represents itself to the user. The combination of your app’s attractiveness and functionality is what determines the effectiveness of the app. You should therefore follow these basic guidelines when developing your app:

The design of mobile apps needs not only to look good but should also interact with users and make them comfortable while using them.

Recent work we did includes developing an innovative Middle-East mobile app for Pizza Hut. The UI/UX was designed so that users can easily navigate and order food with just a few clicks. Our team also incorporated automated food ordering and delivery at the customer’s doorstep so that unexpected delays were eliminated. Since the app is available, 50k downloads have taken place, and conversions have increased by 30%.

With a dependable app development company, your app will include all of the latest features and functionalities at an affordable price. The team of designers, developers, market specialists, and project managers in an app development company always takes your vision into account and offers valuable suggestions. The company has access to the latest technologies as well as industry expertise.

With an MVP, you have only the most basic features, so that users have an idea of what the mobile app is about but not all of the advanced features. Before investing any more money into scaling the app to its next level, MVP apps let you gauge how millions of app store users feel about your app idea.

MVPs, due to their low development costs and efforts, give a very clear indication of an application’s worth, making them the first step toward ensuring its success.

Twitter, Dropbox, Airbnb, Spotify, and Groupon, among others, started out as MVPs and have now grown into top brands.

Here is a pocket guide on the minimum viable product to help you understand the concept better. The guide will not only give you an in-depth overview of the concept, but also detailed instructions on how to build an MVP.

The process of testing an app is inevitable when you create one. You should test every aspect of the app, including performance and content. By testing properly, you reduce development costs and time, identify bugs, and improve your reputation as a service provider.

If your app passes the testing, it can be submitted to Apple’s App Store or Google’s Play Store.

You must, however, follow Google and Apple’s developer guidelines when submitting an app to the Play Store or App Store. Your monetization strategy should also be in line with their specifications.

The next step is marketing your app after it’s been launched in the Play Store/App Store. It is unlikely that users will download your app if they are not aware of it. Making videos that show your app’s core functionality is a great way to inform your target audience about your app and encourage them to explore it. Social media platforms also have a lot of potentials; you can reach every corner of the planet through them. Your app will be presented to potential users and key features that can simplify people’s lives will be highlighted.

The following section will dive into the various issues or mistakes that come with mobile application development, which can adversely affect your future in the mobile world after you have explored the various platforms you can use when developing mobile applications and the latest technology trends.

To begin with, it is important to familiarize yourself with the target market, trends, and usage statistics of your targeted audience. In addition, you should learn what your competitors are doing well and what they are lacking. Your application’s retention and installation rates and interactions with your target audience increase.

Taking a close look at the user interface is another common mistake to avoid when developing an app. UI, or user interface, is what appears first when someone sees your app.

Users are highly impatient when choosing whether to keep an app on their mobile devices since the app stores offer so many options. Another way to put it is that a good user interface is a key to user retention. In order to build an app that users will embrace, mobile design is a vital component.

While designing the UI for an app, you should consider the following points:

From the production of an app to the outsourcing of team members, there will be costs incurred. Making up for these costs and generating profits over time requires choosing the right monetization model. Several methods are available for monetizing your application, including ads, in-app purchases, subscriptions, etc. You should ensure that your chosen monetization model is profitable in the long run.

The opposite is true when a mobile app has a few targeted and important features.

Additionally, an app with too many features will load slowly. Those extra features require a lot of resources, time, and effort. In order to create a complete app, you should include the main feature and other supporting components.

A preliminary product that is designed as an MVP reduces the overall development cost and time. The feedback from the market can also help you improve your app, make necessary modifications to the model, and improve the end result. For the success of your application, it is recommended to build an MVP.

What factors should be considered when hiring a mobile app development company? 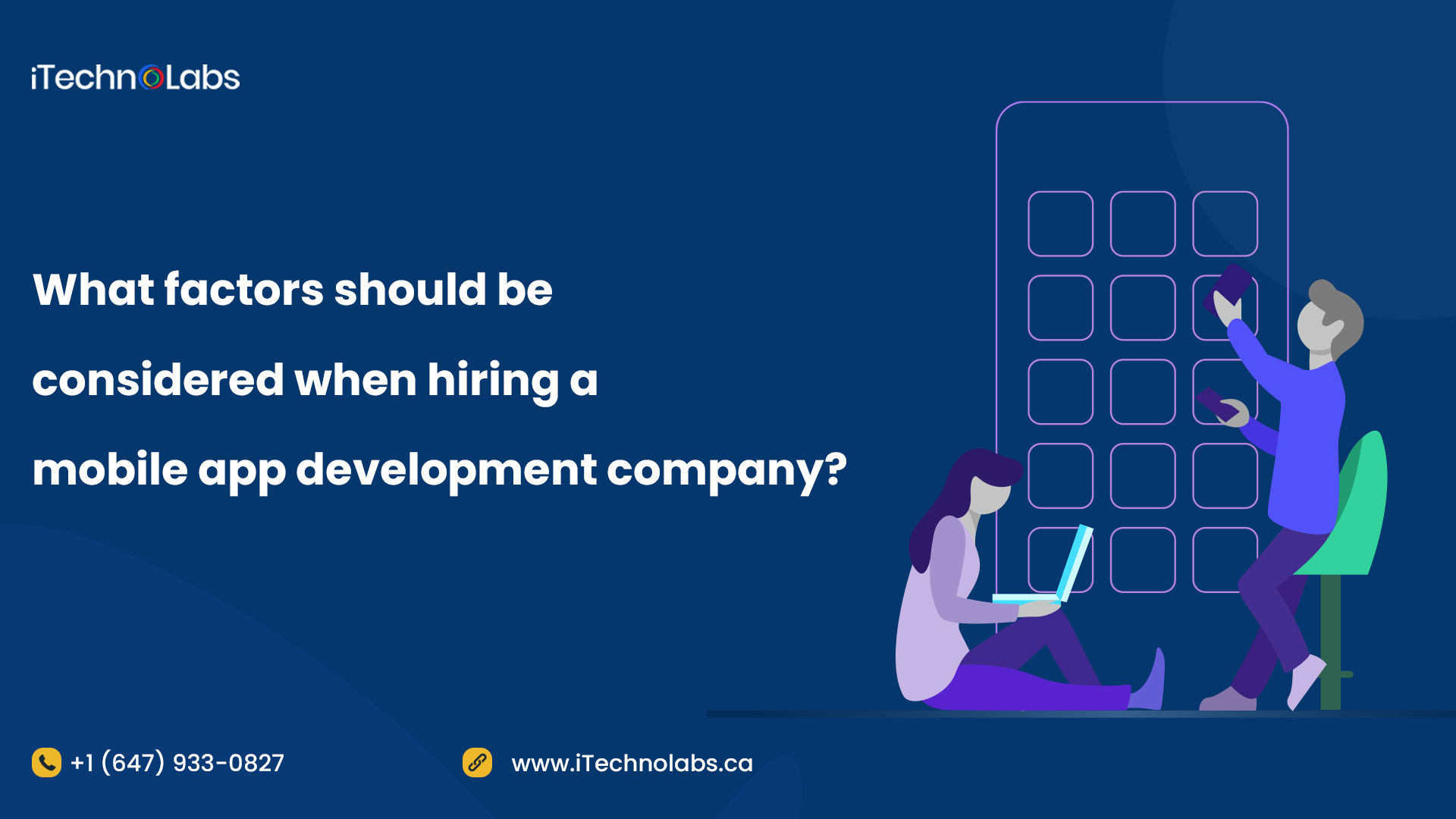 There are several bad stories in the outsourcing industry about companies stopping the project midstream or keeping you in the dark about project requirements and stealing from you as a result of creating a quality product. The quality of an app development agency can be judged by the right set of questions in situations like these.

Are You Looking for a Mobile App Development Company for Your Business? 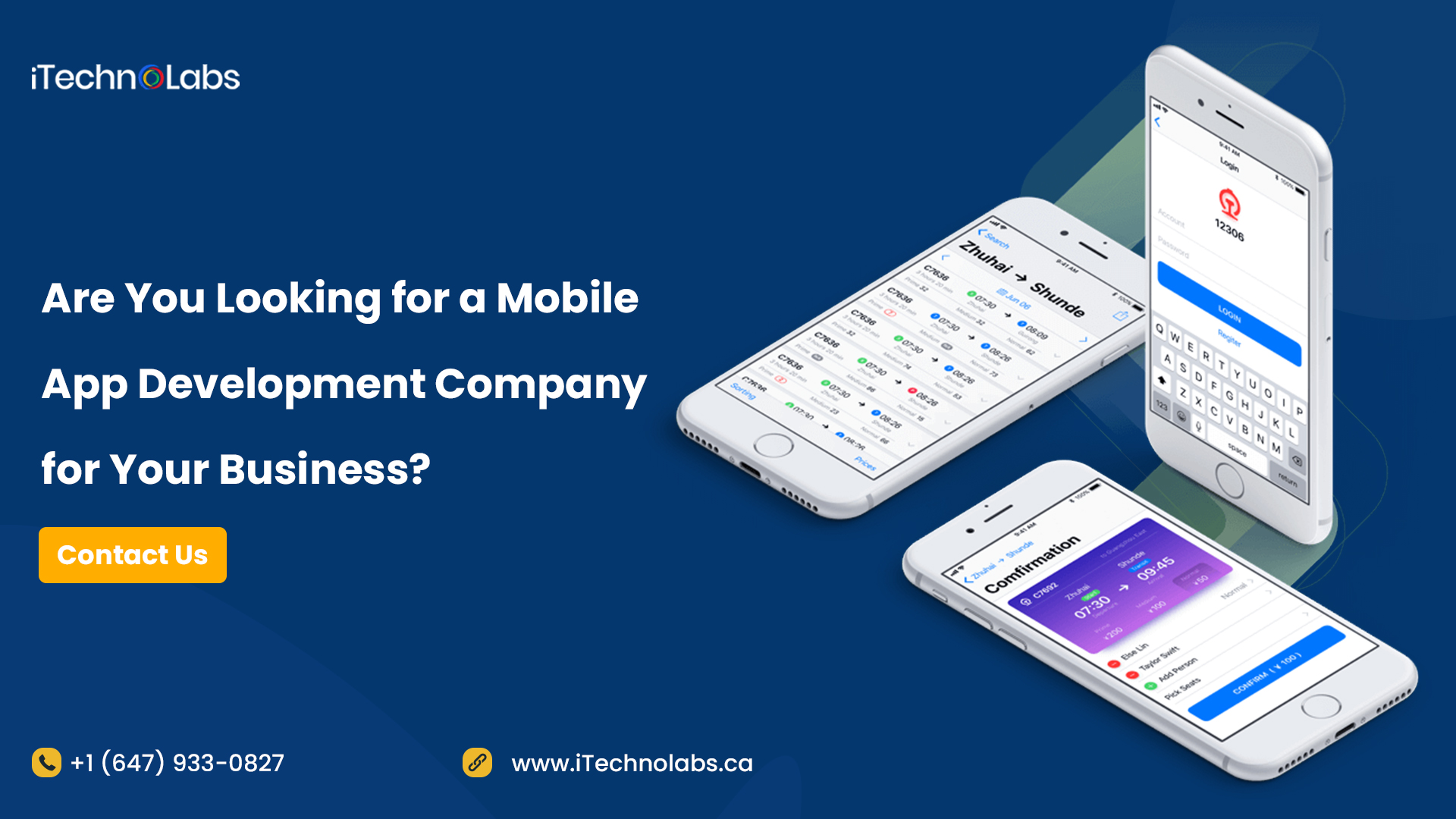 In iTechnolabs, we have developed many innovative and unique Mobile App Development for Businesses to create apps that customers would love.

Feel free to contact us if you’re also interested in creating an app or would like more information about mobile app technology. We’ll be happy to assist you!