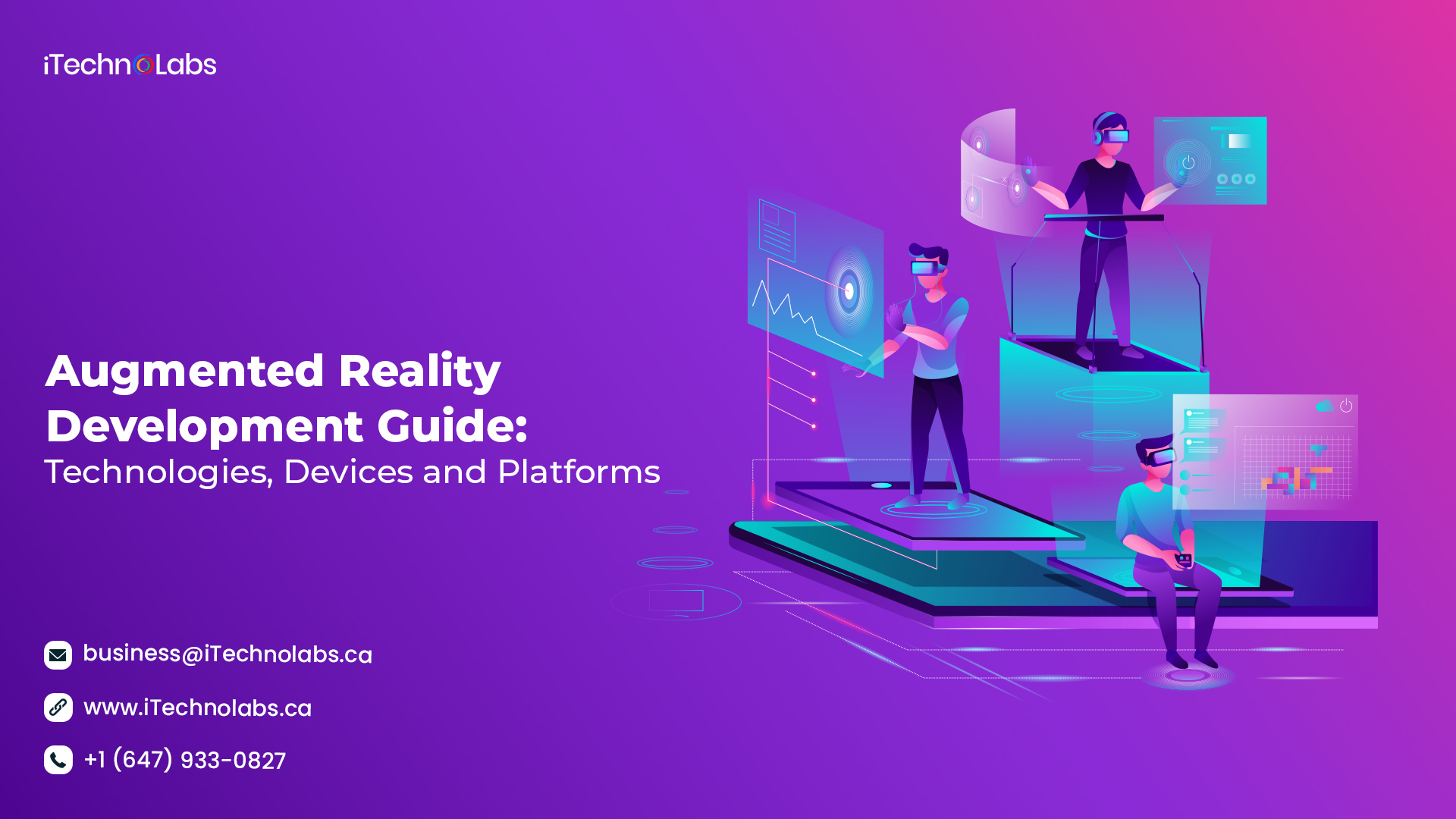 Almost a decade ago, the idea of humans and machines evolving together was not only fictional but also sounded absurd to some. But, the advancement in technology has made it possible. Today, not only the coexistence of humans, and machines but also the dependence on each other is surreal.

But, this is just the start. Technology is in no way stopping. The boundary between the virtual and real world is slowly depleting. And, that’s where Augmented Reality came into the picture!

What is Augmented Reality?

Augmented Reality is a name given to technology that highlights the real-world experience with the aid of the virtual world’s interference. It is an interactive combination of real, and virtual worlds coming together. It begins by influencing the user’s perception of rather usual things, and surroundings, and finishes by making both worlds “Augmented”!

The purpose of leveraging AR can be to enhance user experience or to impart extra knowledge to them. Recently, in 2016 when the AR-based game named Pokemon go went viral, people came face to face with Augmented Reality. The game leveraged the camera feature of devices to provide users an “augmented” or heightened experience of catching virtual pokemon from the real world.

Ever since then, the AR field is getting a lot of attention. And, scientists, as well as IT professionals, are exploring this field.

“In a study, it is found that by the end of 2024, it is estimated that there will be around 1.7 billion mobile AR user devices globally! “

But, as simple as it may sound to leverage AR, the associated tools, platforms, and technologies need to be comprehended. We will discuss all this in detail here! But, first, let’s start by knowing what all types of Augmented Reality apps there can be! 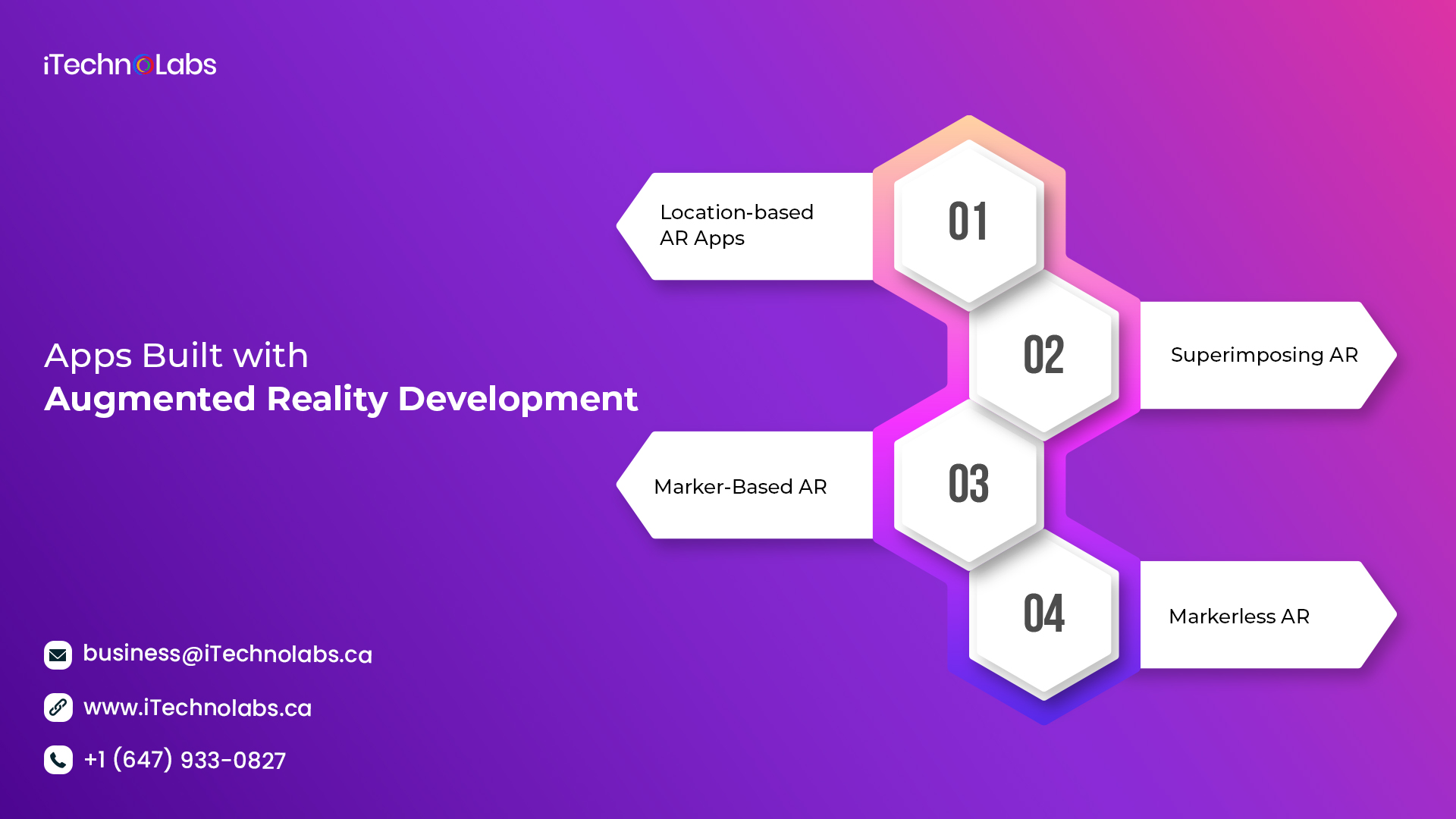 As the technology is vast and hypothetically limitless, there can be several types of apps on the principle of AR. Some of these are-

Location-based AR apps leverage the location of the user to show precise virtual content. These apps track location with the help of GPS, a compass, or sometimes via an accelerometer. Apart from these, other technologies such as low-range Wi-Fi Direct, VPS or virtual positioning system, BLE(Bluetooth low energy) beacons, etc. can also be used to track the position or location of the user.

But, what all features, and activities users can execute on the app depends on how the developer has programmed the app.

There is a type of Augmented Reality app that can change your real surroundings by imposing a virtual image on it. This can be done via apps. The underlying principle involves replacing an object or superimposing an image on it, but all virtually.

For instance, to buy a new couch, you use an app to change the color of that couch to know which suits best for your home. This is an example of a cause-and-effect demonstration. Another example of superimposing AR can be a mobile app that helps you go back in time and see how your city used to look like years ago. This can be done by pointing a camera at a particular area of the city. And, that app then fetches a view from Google maps’ archives. These types of applications can be useful for other industries as well.

The Augmented Reality applications that are based on some markers are known as Marker-based AR apps. These markers, however, can be QR codes, or any other image. The 3D image generated in an app is then placed above these markers. One example of such an app is the PlayStation 3 Wonderbook.

This is also the principle behind some of the Snapchat and Instagram features.

While marker-based AR relies on certain markers, markerless AR, as the name suggests does not rely on any markers. It leverages the camera feature of devices. It detects environment patterns, and motion sensors to identify and place 3d objects in its surroundings.

Along with this, it also revolves around technologies like GPS, or other locations, digital compass, depth sensors, camera features, accelerometer, gyroscope, and others. In some cases, ML or machine learning algorithms are also known to be used in apps based on markerless AR technology.

These were the type of AR apps. But, what if we tell you the main applications of AR depend on which technology is used? Let’s discuss Augmented Reality technologies! 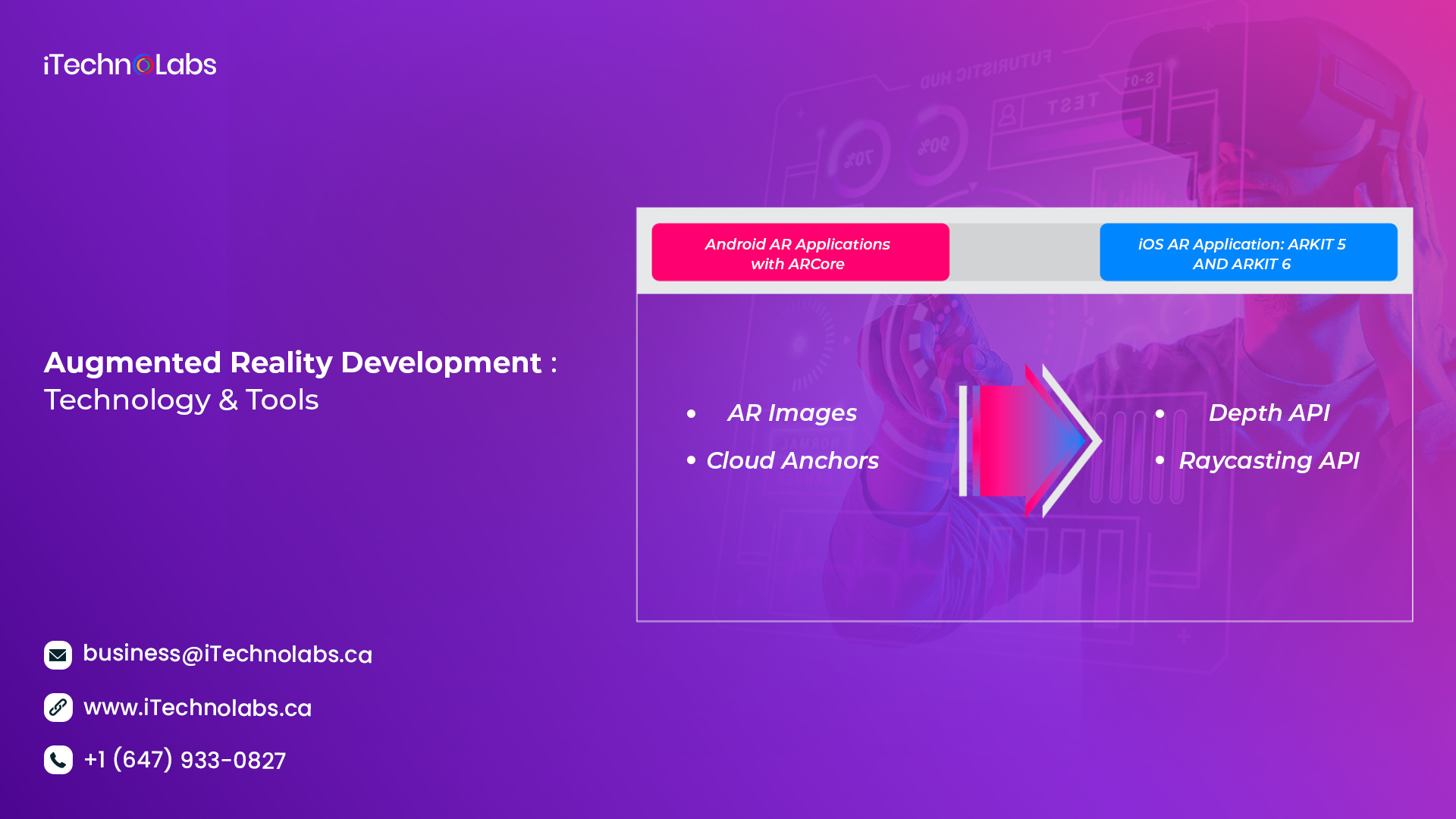 Selecting which technology and tool would be used to develop AR applications might look simple, but it isn’t. It can depend on a range of factors. Like hardware used, features of the device leveraged, power options available, and aim of the application. Apart from this, the operating system for which the application is being built also decides the technology and tools. Here are some of the options!

ARCore is an SDK (software development kit) that allows easy development of AR applications. Delivered by Google Play services, ARCore can make the development process of AR applications for the android platform easier. Considered one of the most versatile platforms for AR app development, it is also stable, and reliable. Here are some of the renowned features leveraged by developers-

This feature of ARCore is widely used in forming virtual business cards, or advertising posters. With 2D markers, it becomes easy to implement utilities like AR indoor navigation with AR image features. Along with this, ARCore’s AR images feature also allows programmers to incorporate facial renderings with the help of generating 468-point 3D models. And, all this without hindering the quality.

If you want to develop an augmented reality application that allows placing virtual objects in physical space (like the one we discussed earlier in this blog), you can leverage the Cloud anchor feature of ARCore SDK. This feature can work on iOS devices as well.

This upgrades the geographic anchoring placed in virtual objects.

Let’s comprehend the features ARKIT 5 AND ARKIT 6 have to offer while developing an iOS AR application.

This feature was also part of ARKIT 4 and has been kept in ARKIT 5, and 6 as well. Depth API takes advantage of the LiDAR scanner feature of iPad Pro and other models of the 12, and 13 series of iPhone. With the help of this feature, an application can help get an advanced, and better analysis of scenes. It also takes care of accuracy while superimposing virtual objects on real objects.

To produce an enhanced object placement, the correct conjunction of depth API is required. And, that’s what Raycasting API can ensure. This not only enhances the virtual object placement but also elevates the precision. It also takes into account the curvature, and edges of the object that can increase precision by several folds.

These were the technologies that can help you develop a functional Augmented Reality Application. But, where to start? How to process? 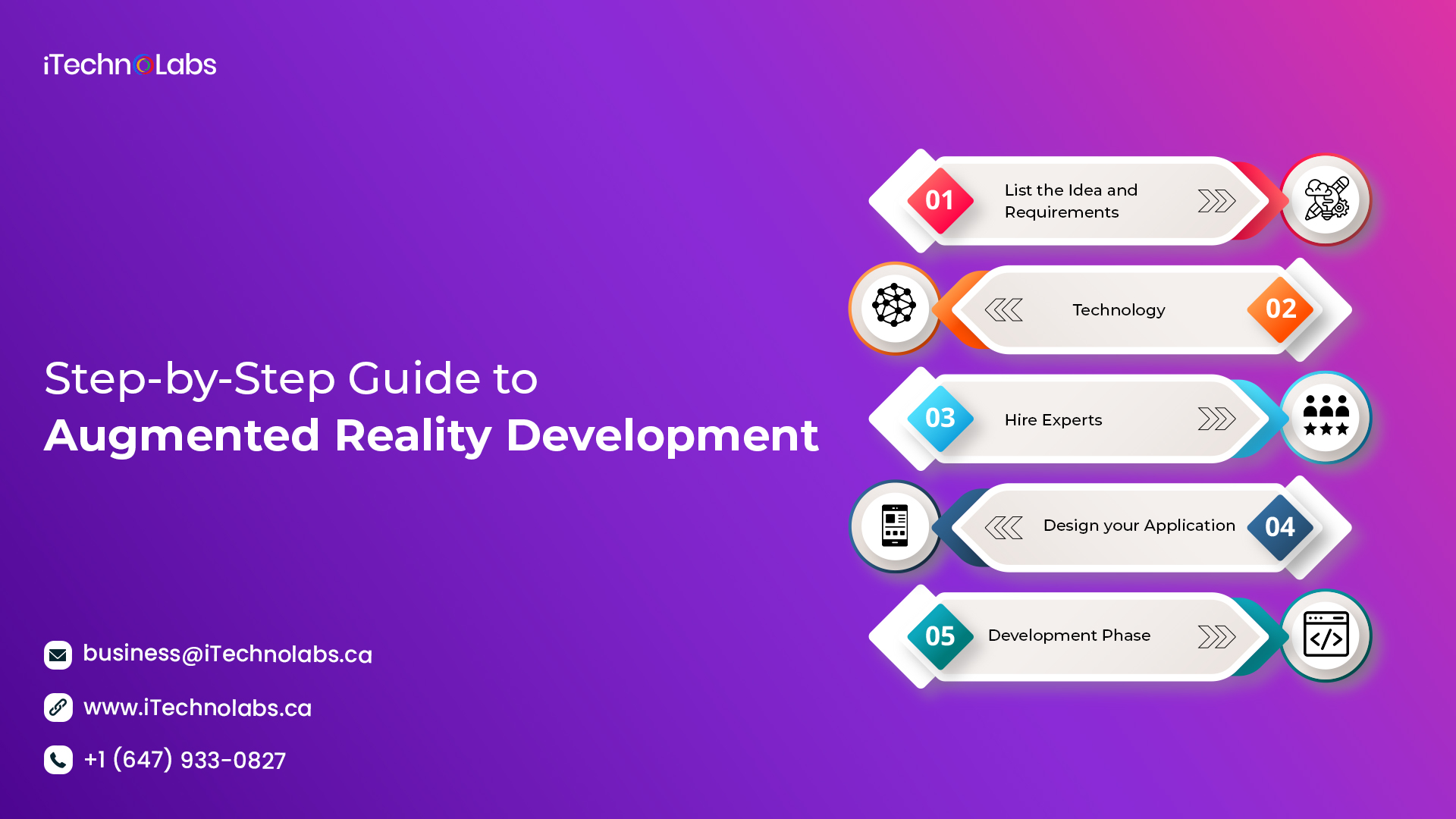 Here is a step-by-step approach to developing AR applications-

How you will process your AR development application depends on what features you need to deliver in your application. Do you need it to leverage location, or superimpose AR? All this will help you shortlist the technology, and tools you would be needing.

Therefore the foremost step is to make a list of features, and utilities you want in your application.

Once you have all the features, and utilities you want to add to your augmented reality application, it’s time to select the technology or tool you would leverage. While this might sound perplexing at first sight, you can make this easy by hiring professional experts.

Another important part of delivering a perfect AR application. As AR applications take part in real surroundings, it is important you design this smartly. Take into account devices, operating systems, user-friendliness, and comfort levels of your target audience while designing. As much as possible, try to keep the application simple to use.

Don’t worry our iTechnolabs experts will handle this. We take the complete onus of developing an AR application for you, All you need is to contact us today!

Are You Looking for Augmented Reality Development Services from iTechnolabs? 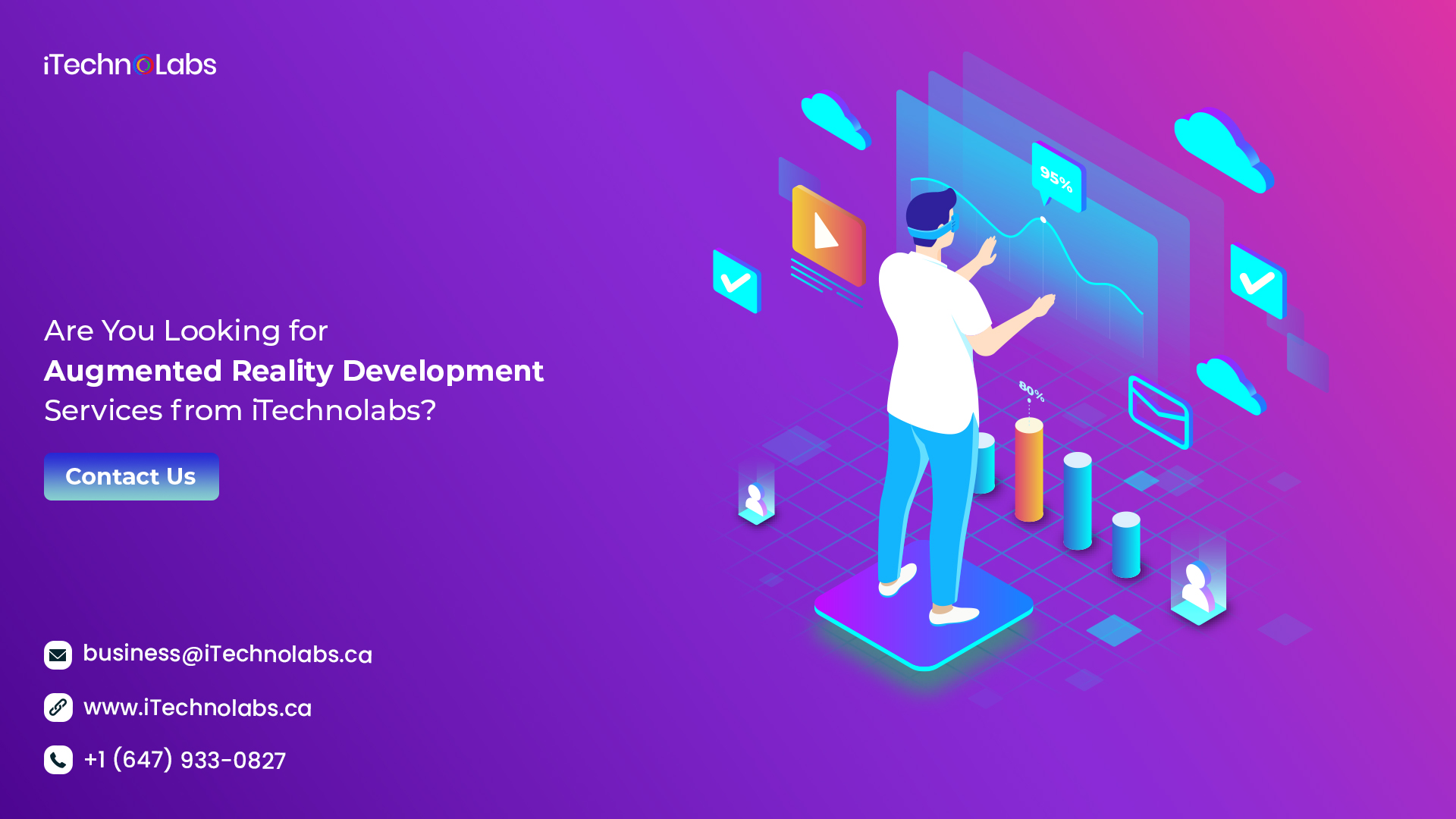 We know the value of technology, and therefore, we never compromise with what our clients need. If you are looking to get best-in-class AR development services, we have your back. Contact us today!