How Much Does It Cost To Hire A Developer?

How Much Does It Cost To Hire A Developer? 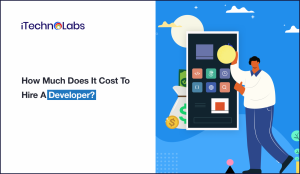 Developers are the need of the hour; whether you are developing an app, website, or software, you need a developer to bring your imaginations into life. However, hiring a developer can be extremely daunting and overwhelming. In this article, you will get to know about cost to hire a developer.

Companies have a tough time finding the right developers who have a good amount of knowledge and have enough experience to finish the job by the deadline. The increasing demand has also increased the cost of hiring a developer.

Today most of the available developers charge hourly for their work done. But several other factors affect the cost of a developer, such as an experience, productivity, availability, provided services, rates, and overall work quality. The cost increases as you look for a developer with higher experience.

Cost To Hire A Developer

If we consider the U.S. Department of Labor report, hiring a developer is a matter of concern because every bad hire can affect 30% of the annual earnings on this position.

But, in case you prefer the second option, you must read this blog to figure out how much it costs to hire a developer.

How Do The Developers Experience Affect The Quality

Not just it, even hiring a junior or senior specialist for the business has different impacts. A junior developer is still in the learning phase, which means it will affect its performance and problem-solving abilities compared to senior ones.

As a business owner, you will never want to lose a client for not completing the project under a decision deadline or poor quality work. Experienced developers are professionals and understand the importance of completing a project within the deadline and with the best possible quality. A non-experienced developer may struggle to complete the task in a given time, plus they may take additional hours, which ultimately increases the expenses and postpone product launch, fixes, and updates.

Also, you risk your claim in the market and may lose a competitive advantage against those who at least finish their tasks on time. Putting your accountability for providing a good service and experience on the stake is not a good choice. Once your clients and customers get dissatisfied, it is next to impossible to bring them on board again, no matter how many future promises you make.

Hence find your developer very carefully and, if possible, research thoroughly before hiring one for your developing needs.

One good example of not paying attention while hiring the right developers is the Boeing 737 Max crisis resulting from a software mistake that led to several fatal crashes. It all began when the company decided to hire cheap developers at the rate of $ 9 per hour who lacked experience in aerospace as they were reducing expenses and even fired the experienced engineers.

Cost Factors To Consider While Hiring A Developer

There are various factors that you should consider before recruiting a developer.

While hiring a developer, various factors decide the developers’ cost depending on the developer’s project development scope, such as location, technical knowledge, and experience.

The cost also varies based on technologies and coding languages. For example, in PHP, CMS, WordPress, or HTML, the charges are not very high, but if the development requires advanced technical skills like Kotlin or C++, you have to pay more.

Software Type You Want To Build

Software type and complexity involved in the development part also play a vital role in deciding the product development cost. The more specific the specialization, the higher the cost.

Let’s understand this with an example, for an AI-based software; you will require a developer with specialized skills, which means you will have to pay higher.

As mentioned earlier, you can either hire a developer on a payroll basis or outsource the job to a freelancer. Both have different impacts on the hiring cost. Having an internal team of developers, coders, and Q.A. testers will help you gain total control of the project and improvements. Having an in-house team may cost you more than what you were hoping to pay.

For example, if you need a senior developer for a particular task, then hiring in-house will cost around:

Along with it, you have to invest in the resources, infrastructure tools & technologies, development costs, and additional benefits to the employees, which you can save by outsourcing the same task to dedicated freelancers on an hourly rate basis as an extension of your development team. But don’t forget to do deep research before hiring any developers. iTechnolabs is extremely popular and known for providing a proficient team of developers with immense knowledge and expertise of the latest technology and trends. They are capable of developing almost any software, app, website, or product you would like to develop. If you need developers for your business or projects, they are your go-to company.

The Hidden Cost Of Software Development

Now you may think why to pay more when you can hire cheap developers for similar services, but there is more than just an hourly rate which managers and leaders often forget to take into accounts such as Management, QA, Communication, Downtime, Customer churn rate, and the Cost of living.

Communication is one of the major elements that affect overall productivity and efficiency. Suppose the communication between the developer and provider does not go well. There can be several obstacles like a lack of understanding and a constant need for explanations that can influence the performance. It may also take extra time to fix the suggested issues.

The increase in time completing the project will ultimately increase the development cost. Hence, companies must consider the expenses like Q.A., management, communication fees, and developer’s working hours.

How Much Time Do Developers Spend On Various Tasks?

If we try to figure out how developers spend their time working on your project and consider the statistics from Thenewstack.io, we found that most developers spend only 32 percent of their working hours on coding. The rest of the time is utilized in maintenance which requires 19 %, testing – 12 %, meetings, management – 23 %, security issues – 5 %, etc.

Professionals may charge more than the cheaper developers available around, but they ensure that the task will be completed within the timeframes. Since they have a good amount of experience, businesses do not encounter problems like communication or lack of understanding. Professional devs have good productivity and collaborate effectively with the other team members.

Difference Between Worst And Best Developers

The researchers from Researchgate.io have found in the study of coding quality that the developers with an average experience of 7 years have greater productivity. They found that the:

Other advantages of hiring experienced developers are:

The Average Salary Of Developers Worldwide

Let’s look at the average salary of developers, then as per the data from Indeed and Daxx.Com. The USA is currently the highest paying country for developers, with an average of $110,638 in 2021.

Whereas the junior developer in the USA is getting around $103,382 per year. The other higher-paying countries are:

The Real Cost Of Hiring Cheap Developers And Expensive Developers

According to the survey conducted by Existek.com of 300 companies from 23 countries in 5 global locations, including Asia have found that the minimum rate you can get is $15/h. Where the rates for experienced and professional varies between $35/h and $50/h.

The factors they consider while figuring out the average costs include the cost of living and the cost of support required to the developers like In-house Project Manager, QA Specialists, Team Leader, and Product Manager/ Owner.

There is no point in selecting an inexperienced developer and hoping to receive top-notch quality and saving money. Ultimately, you end up paying more than your budget because of the lack of knowledge and problem-solving abilities.

Hence, instead, it is better to hire a developer who has a good amount of experience because he/she will give you the best quality and within the time frame, improving your productivity and overall efficiency. iTechnolabs has developers that are extremely professionals and carry years of experience under their belt. With a proven history of developing software, apps, and other digital platforms. We can help you achieve your goals by completing the project on time and with top-notch quality. Consider iTechnolabs as an extension of your team or your team outside the office.