How Can Low-Fidelity Prototypes Make a Huge Difference For Your Mobile App Development?

How Can Low-Fidelity Prototypes Make a Huge Difference For Your Mobile App Development? 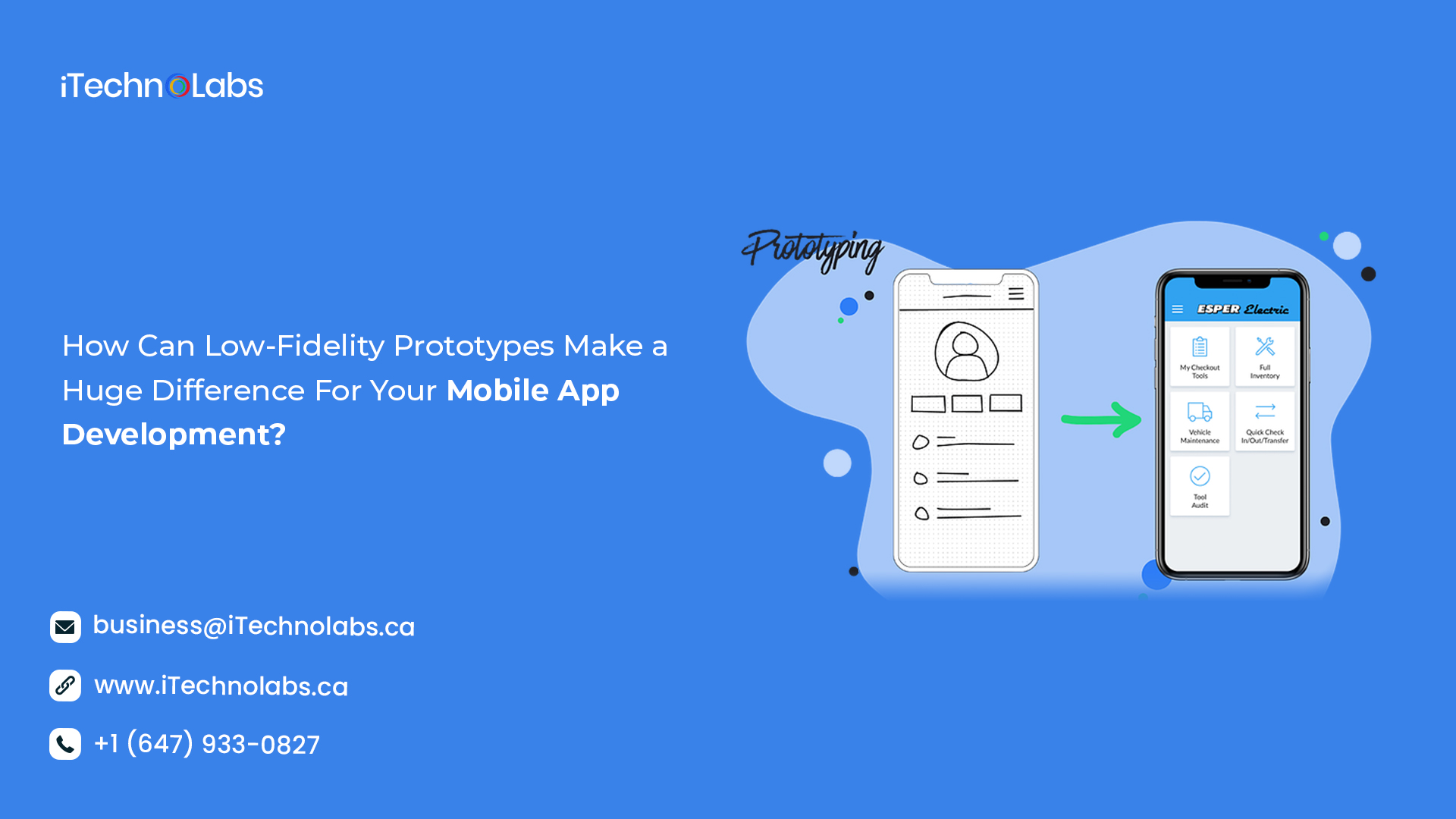 App development is expensive, and people who want to launch a new app take a considerable risk. Creating new software can cost tens of thousands of dollars, and it will cost more and more to keep it running as it grows. Still, only one of the 10,000 new consumer apps will make much money.

If you make apps, you don’t have many chances of success. But your chances of success are much higher if you take the proper steps, like making an effective low-fidelity prototype to get feedback early on and ensure you’re on the right track.

Around 2009, the idea of a “lean startup” made its way into the startup world. In his book The Lean Startup, Eric Ries discusses a new way to build businesses. Through iterative product releases, this method tries to shorten the time it takes to make a product and prove that a business model will work. One of these experimental methods is prototyping, especially building and testing low-fidelity prototypes.

When it comes to UX design, prototypes are essential. A good prototype adds a lot of value to your product in many ways. Prototypes can boost your product development and make things easier in the long run. They can be used to test ideas, see if people like them, and see how well they work.

A prototype can help you test an idea and see what it will look like in real time. It can also help you find missing features and determine what needs to be done early on. But when it’s time to make your next app, you should know how the different design stages affect the project.

As one of the essential parts of UX Mobile App Development, prototyping is like making a map of how your project will work. But which prototype should you choose? A prototype with low quality or a prototype with high quality? In this article, we’ll look at some of the ways that low-fidelity prototypes are different from other tools.

What is a model?

We hear the word “prototype” used in many different ways. Because of this, it might not be clear what it means.

At its most basic, a prototype is a way to show what the designer was trying to do. Prototyping lets designers show off their ideas and see how they work. When it comes to digital products, a prototype is a simulation of how the user and interface will work together in the end. A prototype can act as a stand-in for the whole app or just one interaction, depending on the product team’s needs.

A prototype is a model of how a product will work when it’s done. It lets product teams see if their designs are practical and easy to use.

Prototypes don’t have to look exactly like the final product; they can look different. The fidelity of a prototype is how close it is to the final product in terms of how it looks and feels (basically, its level of detail and realism).

Fidelity can be different when it comes to:

Lo-fi (low-fidelity) prototyping is a quick and easy way to turn high-level design ideas into things that can be seen, touched, and tested. The first and most crucial thing lo-fi prototypes do is check and test how the product works, not how it looks.

Most important things to know about low-fidelity prototypes 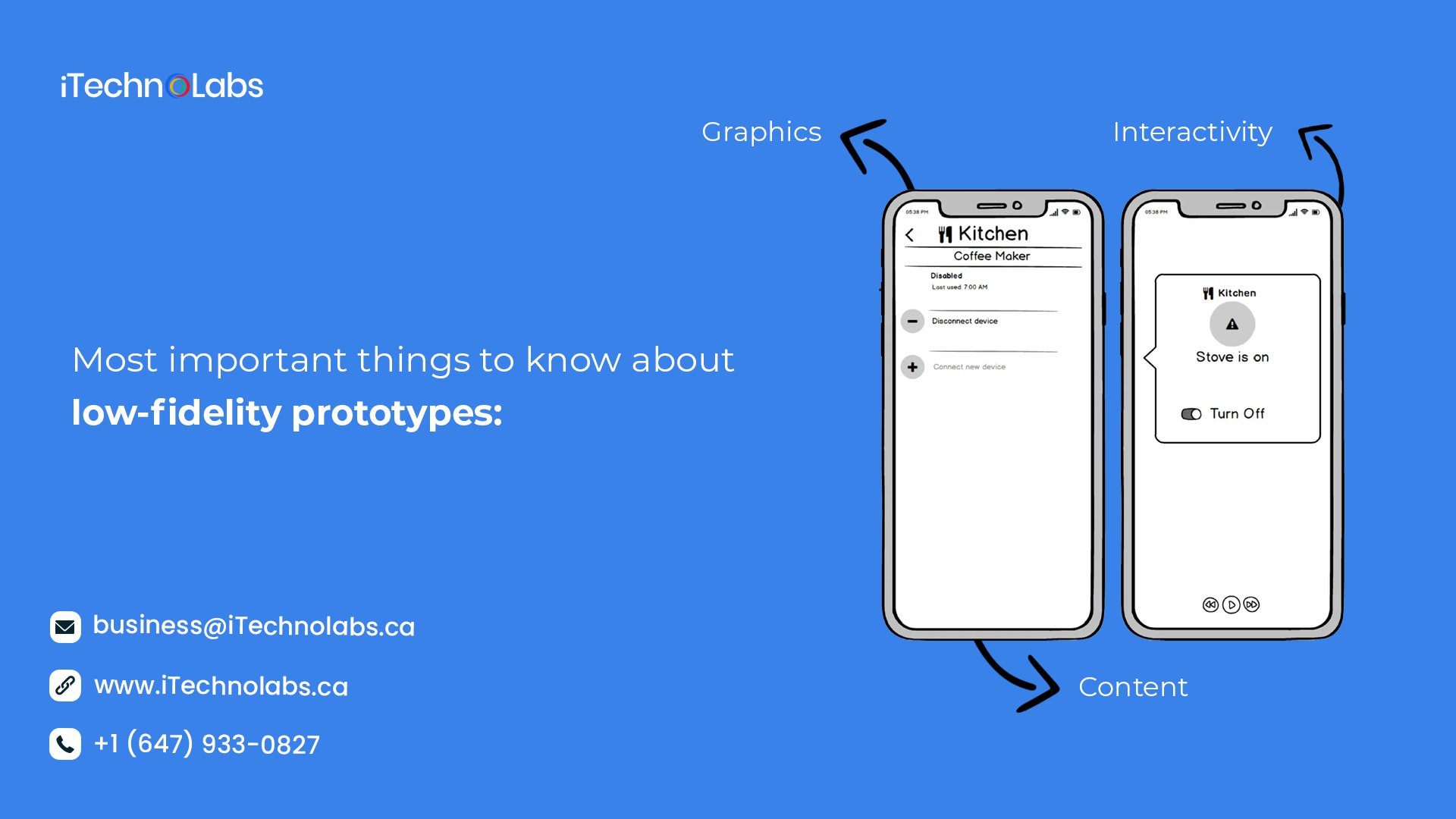 • Graphics: A small subset of the final product’s visual characteristics are displayed (such as basic visual hierarchy, shapes of elements, etc.).

• Interactivity: A natural person can act out the prototype. During a testing session, someone who knows about design acts as a computer and changes the state of the method by hand in real time. Wireframes also called “connected wireframes” can be used to make something interactive. This type of prototype is made up of wireframes linked to each other in an application like Keynote or PowerPoint or by using a unique digital prototyping tool like Adobe XD.

When should you use a prototype with low quality?

At the beginning of the design process, low-fidelity wireframes or prototypes are terrific because they are easy to make and change as the design iterates. You can build it from scratch when you don’t have much time or don’t want to interrupt the design process.

Prototyping, as is well-known, plays a crucial role in UX design thinking. Low-fidelity prototypes are great for brainstorming, showing design ideas to the client, and keeping them in the loop with developers and other project stakeholders.

It’s an excellent tool for getting everyone on a project team on the same page.

You can use it to test an idea for a project before you start making it or when the cost of making a high-fidelity prototype is too high.

Even though the contents and visuals aren’t described in detail, the stakeholders and team members can easily understand the project and have a much clearer picture.

How to use Low-Fidelity Prototypes? 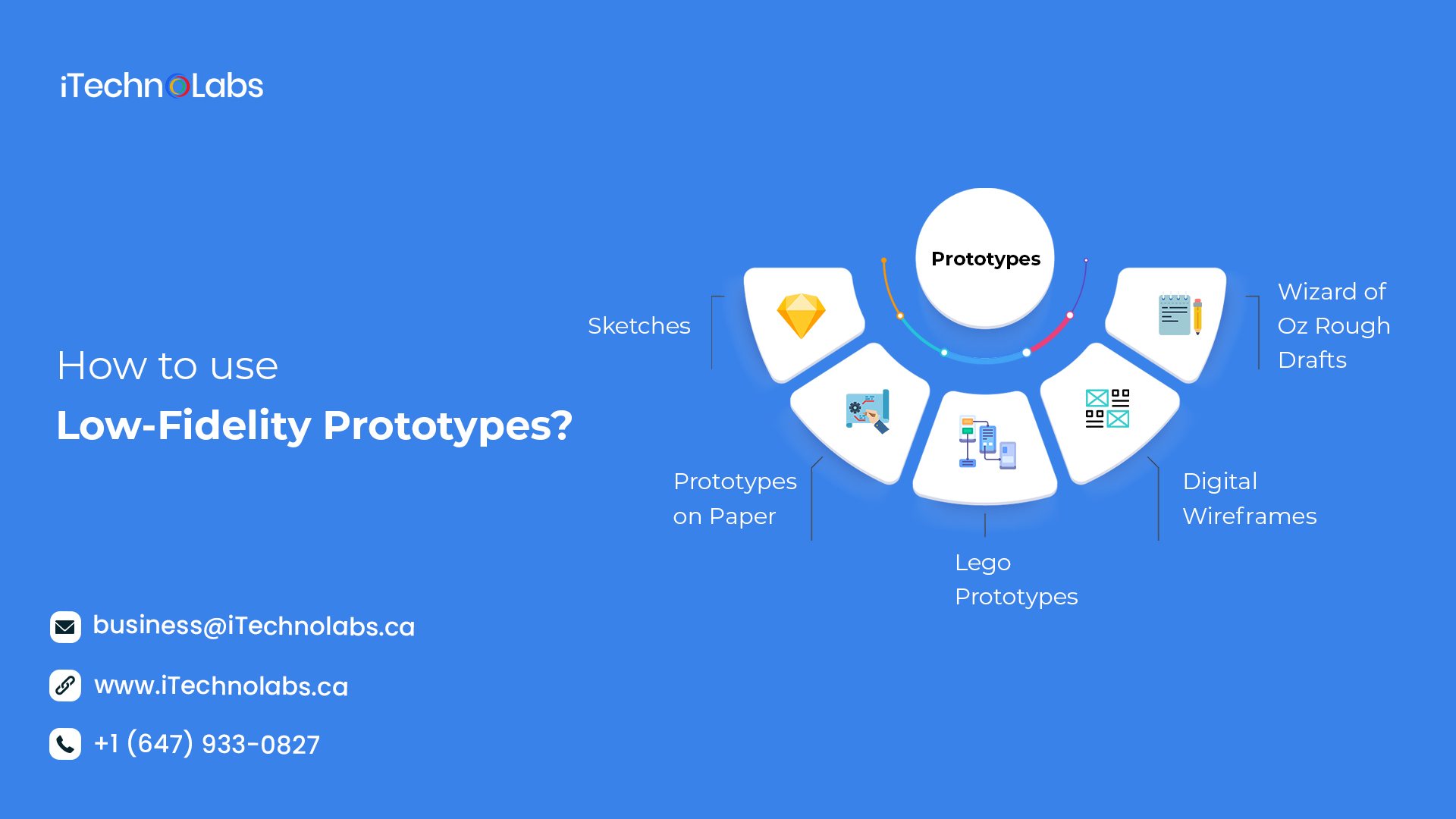 Even though sketches aren’t technically prototypes, they can be accommodating for making decisions because they are so easy to make and even easier to throw away. We don’t need to be good artists to draw well, so this is an excellent tool for designers and people who aren’t designers.

Paper prototypes are easy to make, cheap, and easy to change.

By moving pieces of paper, you can make rough “animations” that give users a better idea of how the interface will work.

You don’t have to pay attention to the deeper, more prominent parts of an interface, like the colour of a button. This lets you test the idea behind your idea instead of how it will look.

Paper prototypes are not finished, so people won’t be afraid to tell you what they think because they don’t want to hurt your feelings.

Lego is a toy that every kid needs to have. The company’s success is due to its ability to be used in many different ways and to spark people’s imaginations. As a designer, you can use Lego’s flexibility to make quick and easy models of your ideas. The best thing about building prototypes with Lego pieces is that they are easy to take apart and change. Just detach a part of your Lego prototype, swap it out for a different one, and try it out to see if it works.

Wireframes are simple, bare-bones pictures of your website or app. They let you ignore how your prototype looks and how it works so you can focus on its structure and how it works.

Wizard of Oz prototypes have fake functions. For example, you might have a teammate act out complex interactions instead of writing software for it. Some parts of your product are like the Wizard of Oz in the story, who hides behind a curtain and makes himself look scary and deceptive. They’re like low- to medium-fidelity prototypes, where the most critical functions don’t work at all, but other things, like how they look, are fully designed.

Do you have Low-Fidelity Prototypes and Looking for Mobile App Development Service? 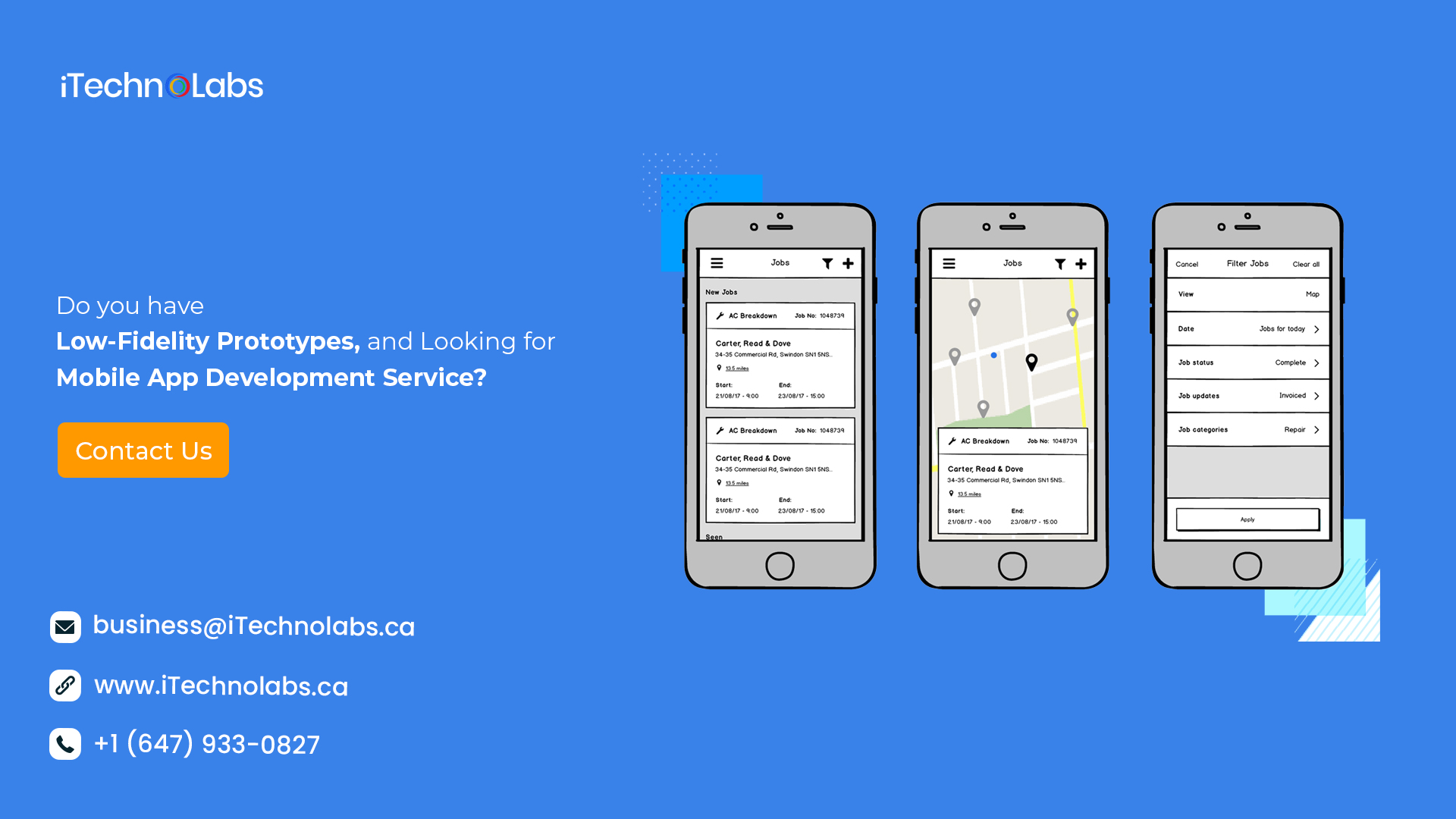 Lo-fi prototypes are great for testing the big picture and the details of the user interface. You can make a prototype in several ways. For example, you can build the whole interface on a single page or use UI/UX services to make the process faster.