The MERN Stack: Everything You Need to Know

The MERN Stack: Everything You Need to Know 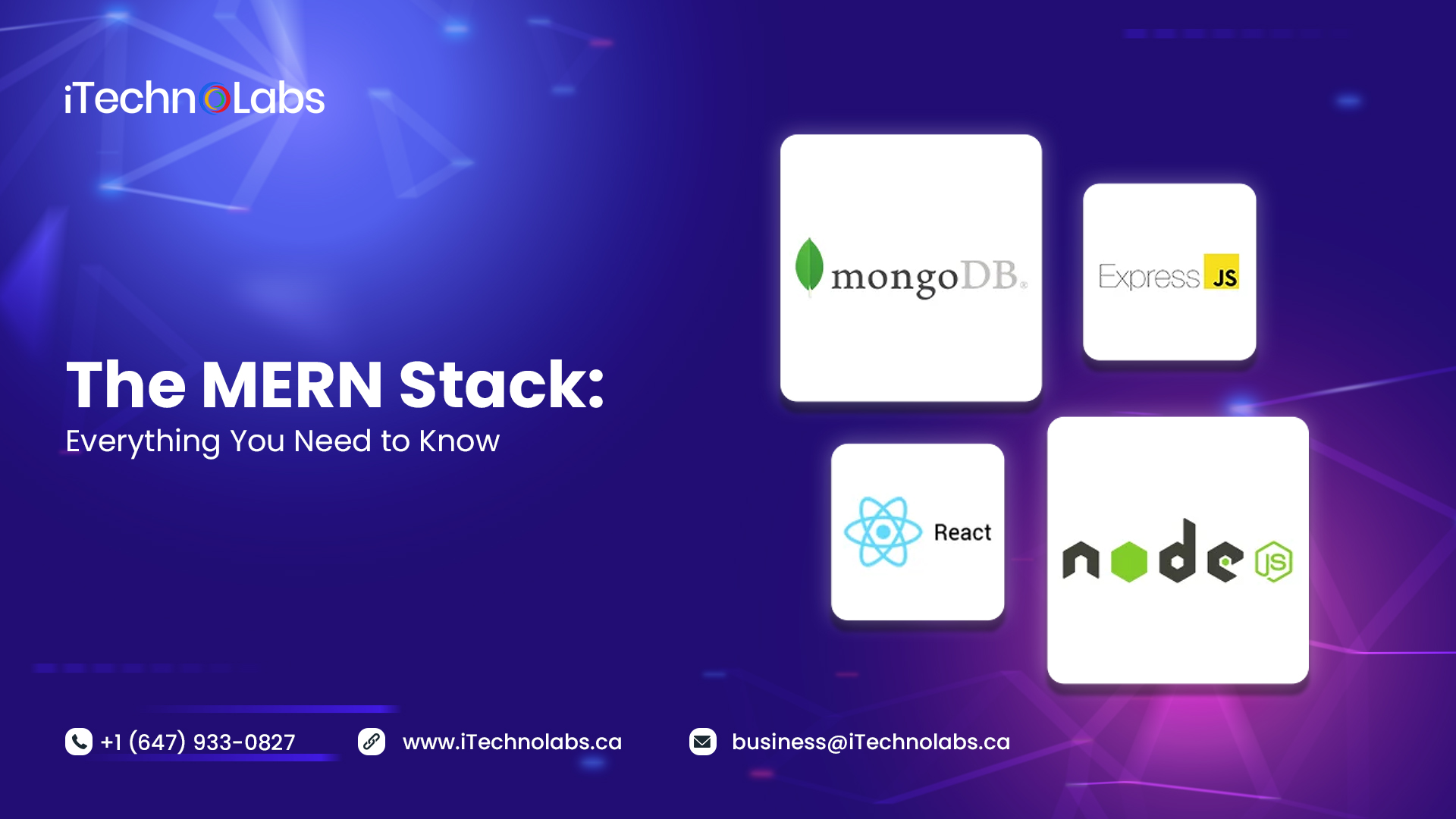 The MERN stack is receiving increasingly popular and is a solid one to work in. If you know how to build and run good MERN apps, it will help your career as a developer a lot. 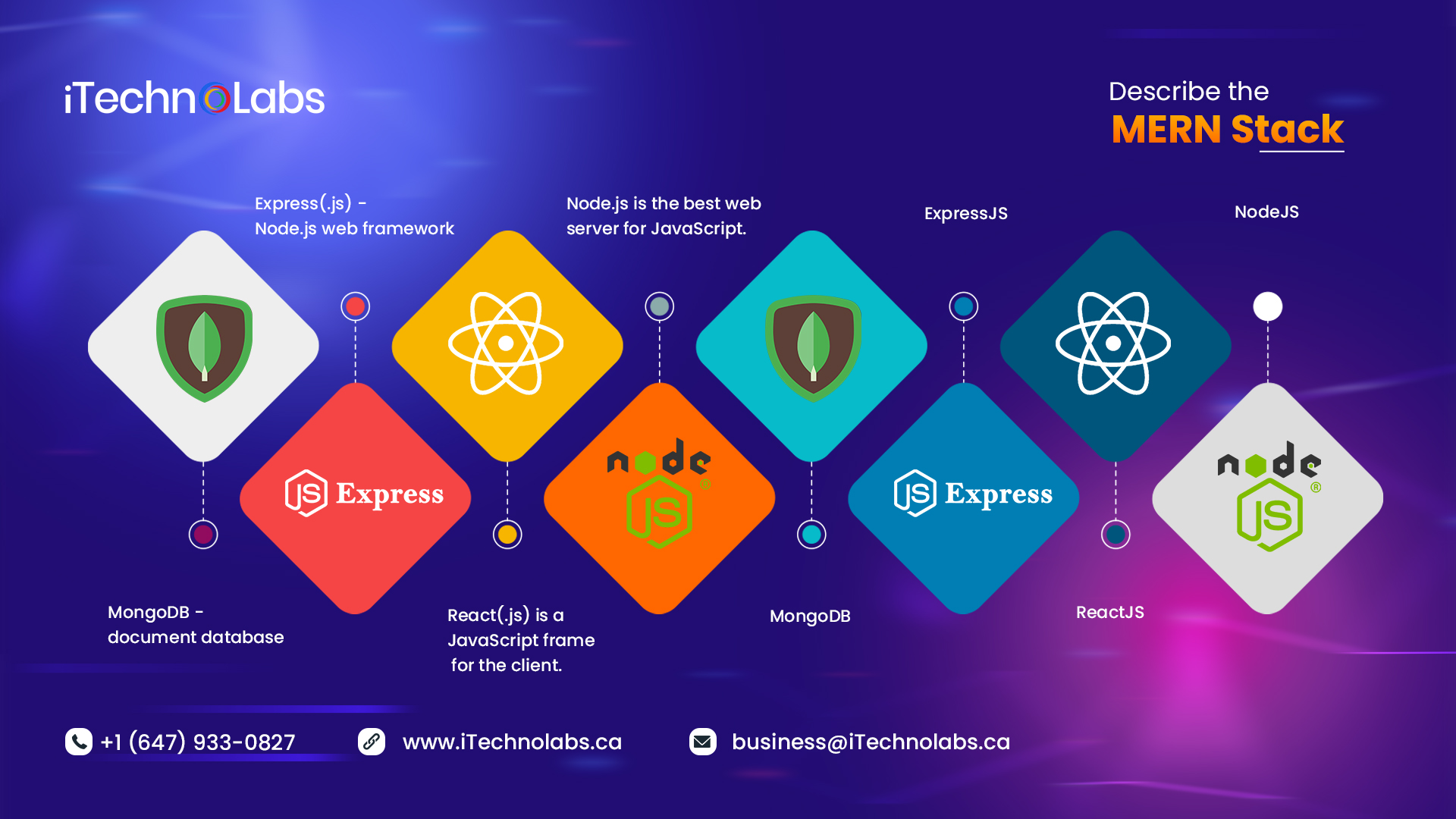 MERN Stack is an acronym for MongoDB, Express, React, and Node, four of the stack’s most critical technologies.

MongoDB, Express, React, and NodeJS are shortened to MERN. MERN stack is a set of technologies based on JavaScript used to build full-stack websites. MERN stands for MongoDB, utter.js, React.js, and Node.js. These four technologies can be used together to make impressive web apps.

On the other hand, the backend technology includes PHP, NodeJS, MySQL, Python(Django), etc.

Full-stack means that both front-end and back-end technologies are used together.

So, if you want to be a Full-Stack developer, MERN Stack is something you need to get your hands on it.

MongoDB is the first part. It is a NoSQL database management system.

ExpressJS is the second part of the MERN stack. It is a framework for back-end web applications for NodeJS.

React(.js) is a JavaScript frame for the client.

The third part is ReactJS, a JavaScript library for building user interfaces (UIs) from UI components.

Node.js is the best web server for JavaScript.

NodeJS is the last part of the MERN stack. It is a JS runtime environment that lets JavaScript code run outside a browser.

The middle tier is made up of Express and Node. Node.js is a popular and powerful JavaScript server platform, and Express.js is a server-side web framework. ME(RVA)N is the best way to work with JavaScript and JSON, no matter which version you choose.

Learn more about the parts.

MongoDB is a NoSQL DBMS where data is stored in key-value pairs in documents, similar to JSON objects that store data. Users can make databases, schemas, and tables with MongoDB. It comes with the Mongo shell, which lets you delete, query, and update records using JS.

MongoDB doesn’t have a standard schema like most relational databases, which consists of columns and tables. Data is kept in flexible documents with a query language based on JSON (JavaScript Object Notation). The documents can have different contents, sizes, and numbers of fields. This means that the structure of the data will change as time goes on.

ExpressJS is a framework for NodeJS that makes writing code for the back end easier. It keeps you from having to do a lot of Node modules. ExpressJS has middleware that helps keep the code clear.

The Express framework is made for making web apps and APIs that work well. It’s known for being fast and having a simple design, with a lot of extra features that can be added as plugins.

ReactJS is a JS library that lets you make user interfaces for mobile and single-page applications (SPAs). It enables you to write JavaScript code and build user interface (UI) components. The JS library does everything with virtual DOM.

With the React library, you can make views that are rendered in HTML. Ideas in React are told what to do. This means that developers don’t have to worry about managing the effects of changes to the data or the view’s state, which is the object that controls how components act.

NodeJS is a JavaScript runtime environment that is free and open source. It lets users run code on the server. It comes with npm, or the node package manager, allowing users to choose from many node modules or packages. Node runs code faster because it was built on the Chrome JavaScript Engine.

Node.js doesn’t need an HTML page to work. Instead, it uses its module system based on CommonJS to create several JavaScript files.

Why do startups need to choose the MERN Stack? 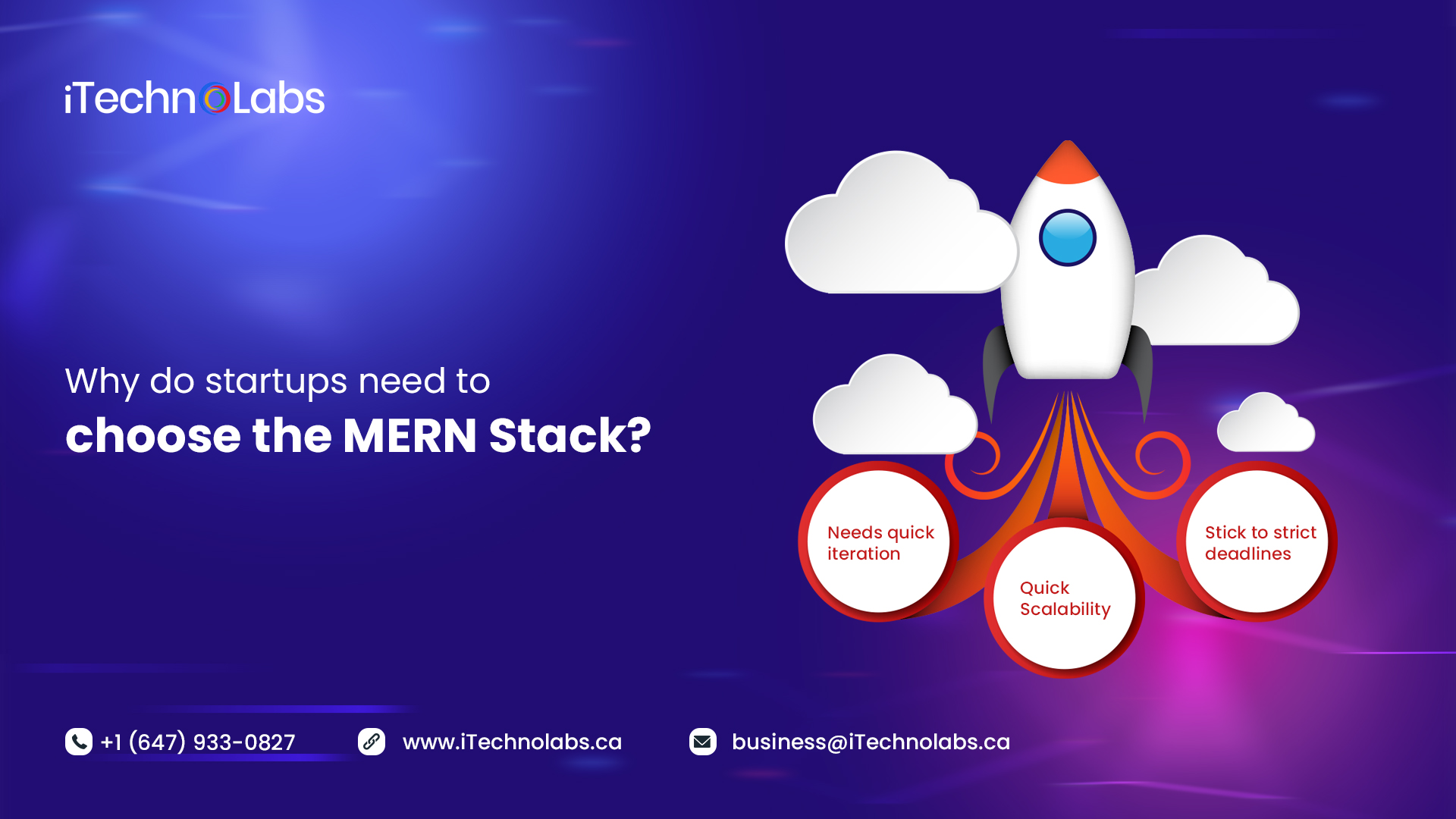 Let’s start with MongoDB, the MERN stack’s document database. MongoDB was made to store JSON data natively. It uses a dual account of JSON called BSON, and all from its authority line interface to its query speech (MQL, or MongoDB Query Language) is built on JSON and JavaScript.

MongoDB works well with Node.js, making it easy to store, manipulate, and display JSON data at every application level. MongoDB Atlas makes it even easier by giving you an auto-scaling MongoDB cluster on the cloud provider of your choice with just a few clicks of a button.

Express.js, which runs on Node.js and React.js, makes the JavaScript/JSON function MERN full stack full. Express.js is a framework for server-side applications that wraps HTTP requests and response and make it simple to chart URLs to server-side function. React.js is a JavaScript framework for the front end that lets you build interactive user interfaces in HTML and talk to a remote server.

Because of this, JSON data flow visibly from front to reverse, which makes it quick to build on and not too hard to debug. Plus, to understand the whole system, you only need to know one programming language and the structure of a JSON document.

MERN is the best stack for web developers who desire to move rapidly, especially those who have worked with React.js.

It would help if you did all the essential things to get people to notice you on the market for successful startups.

Needs quick iteration—Any new business should be ready to test products and get them on the market as soon as possible. MERN makes it easier to get a product off the ground.

Quick Scalability: They should be ready for scaling to become a big deal overnight.

Stick to strict deadlines—time is money! Because your business competitors are always ready to beat you and move faster with faster time to market and quicker iterations, you should develop sustainably and keep up with industry changes and benchmarks.+=

What’s good about the MERN Stack

Every line of code in the MERN stack is written in JavaScript, which is the main benefit for developers. This is a language that is used everywhere, both for code on the client side and on the server side. Since all tiers use the same language, there is no need to switch between them.

Developers must figure out how to connect the different programming languages in a tech stack. Developers only need to know how to use JavaScript and JSON to use the JavaScript stack.

How do you use the MERN stack? 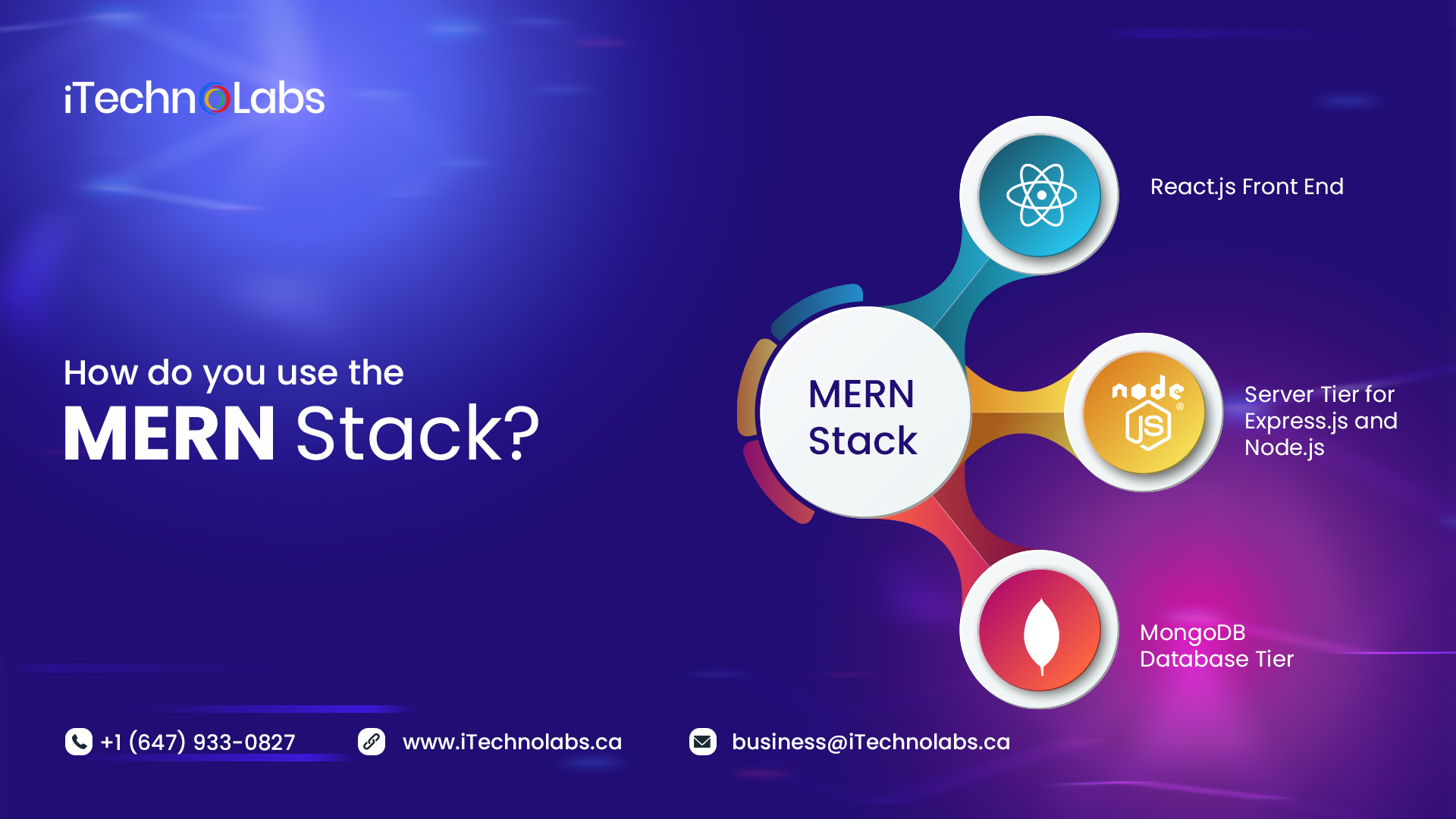 The MERN architecture makes it easy to build a three-tier architecture (front end, back end, and database) using only JavaScript and JSON.

React.js, the declarative JavaScript structure for making dynamic client-side applications in HTML, is at the top of the MERN stack. React lets you build complex interfaces out of simple Components, connect them to data on your backend server, and leave them as HTML.

React is good at handling tasteful, data-driven interfaces with petite code and minor pain. It also has all the chimes and whistles you’d expect from a modern web framework, like great support for forms, error handling, events, lists, and more.

Server Tier for Express.js and Node.js

The Express.js server-side framework runs inside a Node.js server and is the next level down. Express.js calls itself a “fast, opinion-free, minimalist web framework for Node.js,” and that’s precisely what it is. state.js has influential models for URL steering (matching an incoming URL to a server function) and handling HTTP requests and responses.

By making XML HTTP Requests (XHRs), GETs, or POSTs from the front end of your React.js app, you can connect to the Express.js functions that run your app. These functions then use MongoDB’s lump.js drivers, either through callbacks or promises, to right of entry and alter data in your MongoDB file.

If your app stores data like user profiles, content, comments, uploads, events, etc., you’ll want a database that’s just as easy to work with as React, Express, and Node.

Here’s where MongoDB comes in: JSON documents made in your respond.js front end can be sent to the state.js server, anywhere they can be processed and, if they’re valid, stored directly in MongoDB so they can be retrieved later. Again, you should look at Atlas if you’re building in the cloud.

How MERN is used? 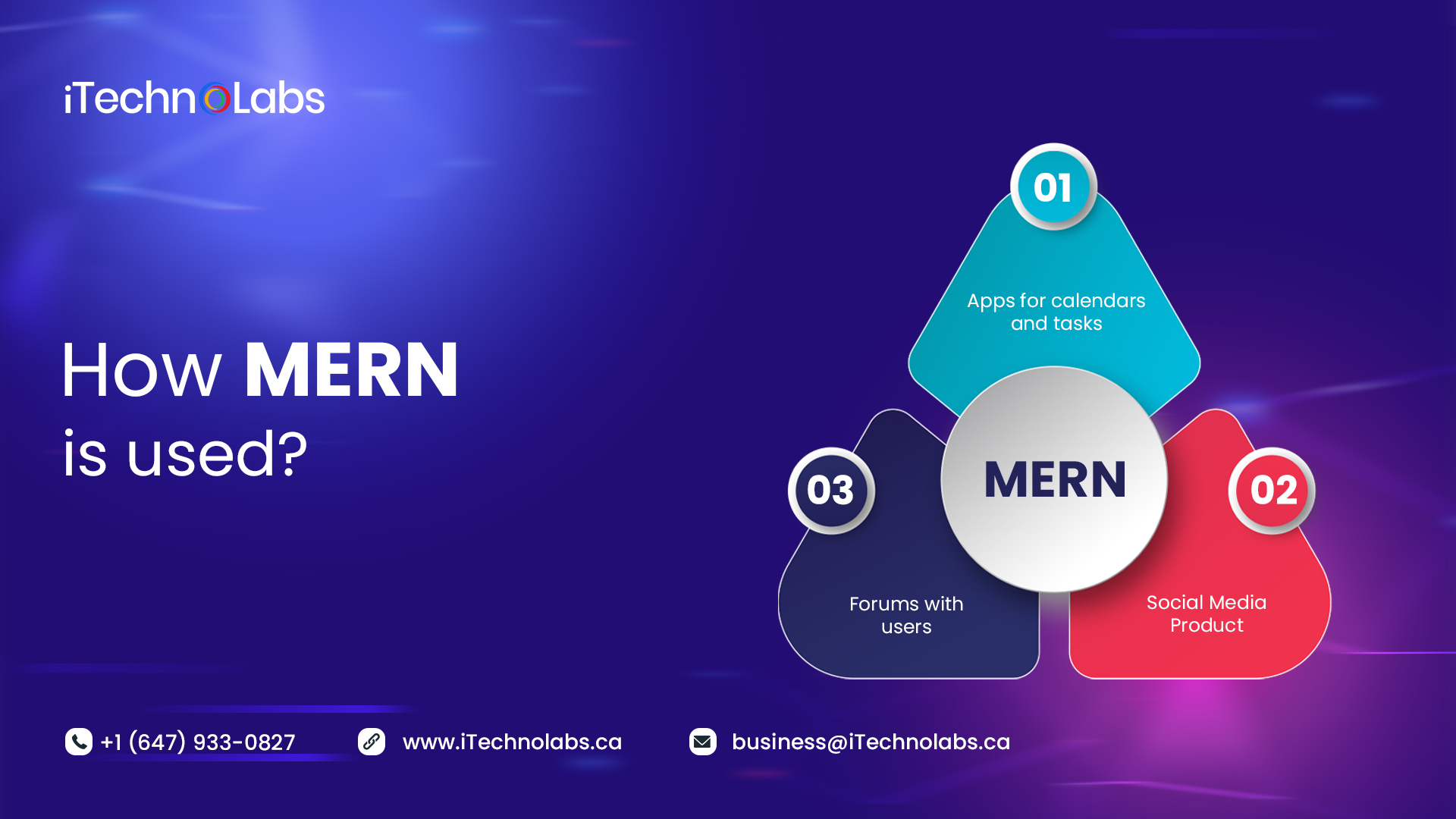 MERN can be used to build anything like other popular web stacks. It is, however, perfect for cloud-based projects that need a lot of JSON and dynamic web interfaces. MERN is used for many different things, such as:

Apps for calendars and tasks

An interactive forum, a social media site, or a website that lets people share messages and talk to each other, is another good use case for MERN. The topic of the forum may or may not be set in advance.

One way the MERN stack can be used for social media is to create an interactive forum. These are ads, posts, a small web app built into the social media page, and so on.

Do you want to hire MERN Stack Developers for Your Business? 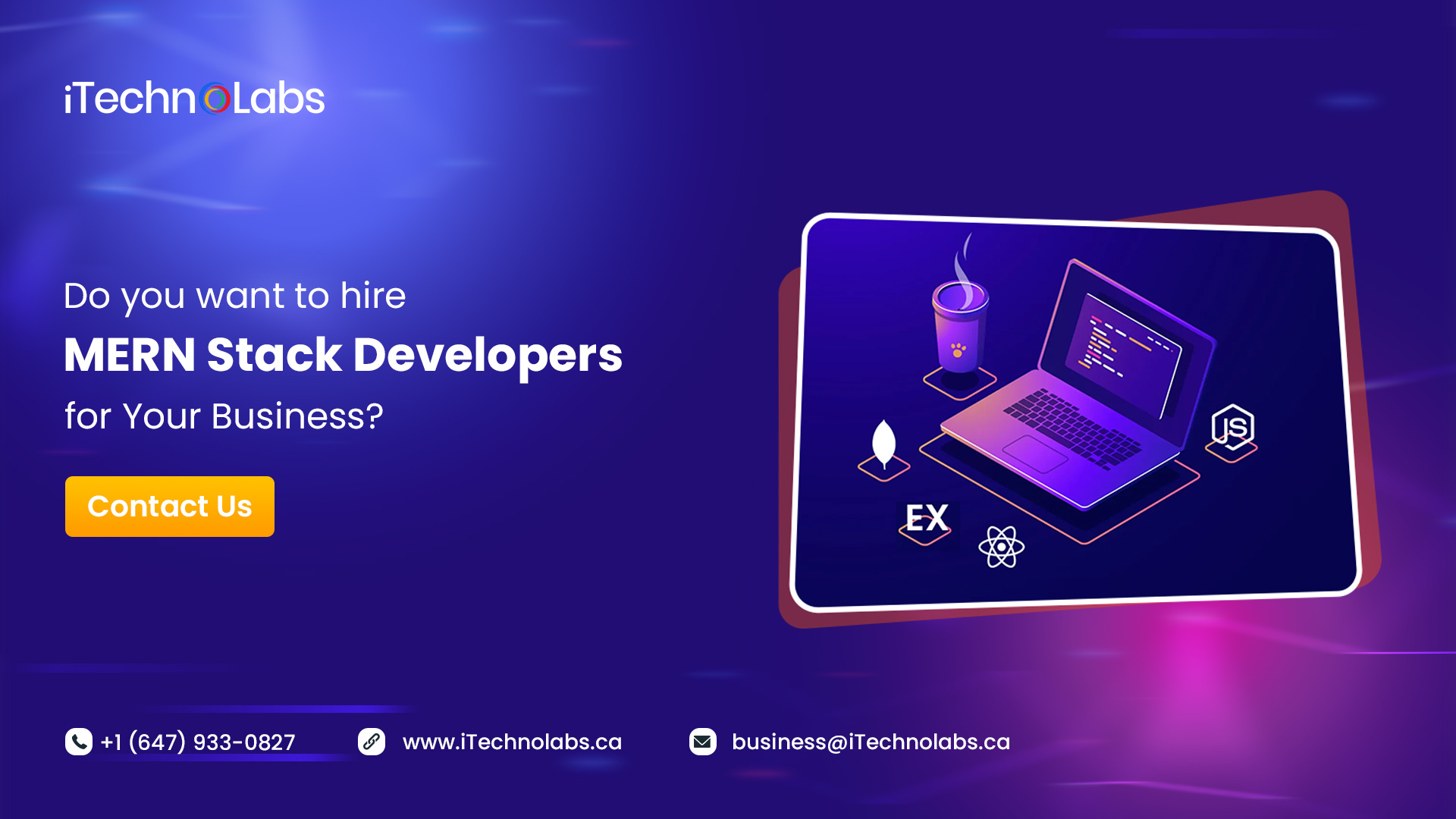 This whole stack web development course will teach you everything you need to know to make your dynamic web apps. The online Bootcamp covers JavaScript, MongoDB, Express, React, and Node.js, all parts of the MERN stack. You will also learn HTML, CSS, Python, and Django, all in demand.

This part-time online learning program is the best way to learn the MERN stack and ensure your web development career is ready for the future.