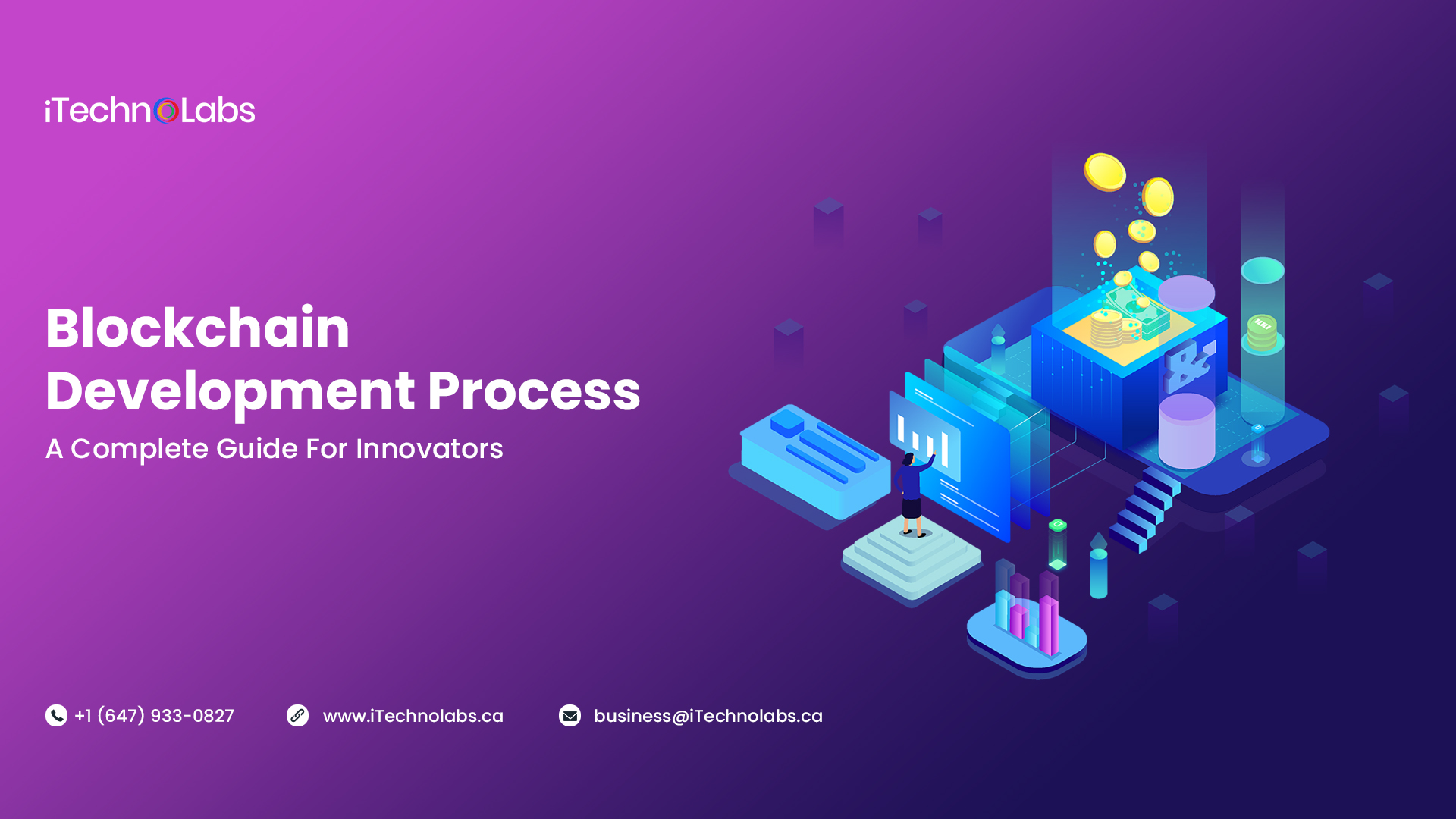 Blockchains are speeding up business operations to make them acute. It aims to modify various sectors of the economy including health care, financial services and much more.

A research report by CB insights says that big companies like Pfizer and Walmart have successfully built blockchain pilots in medicine tracking and food safety. Reports also show that blockchains have hit a record of $9.28B in the first quarter of 2022.

Blockchains enable people to protect their assets from inflation, and other protective measures introduced by the government. If you are focusing on investing in blockchains then don’t overlook the concept of the Blockchain Development Process. This guide focuses on providing you with knowledge of the blockchain development process and how to include blockchains in businesses. By the end of this article, you will also come across a scalable web development site “iTechnolabs”. They have been designing websites for leading businesses and institutions around the world. They provide a one-stop solution to cater for all your design, development and marketing needs.

What is Blockchain and its benefits? 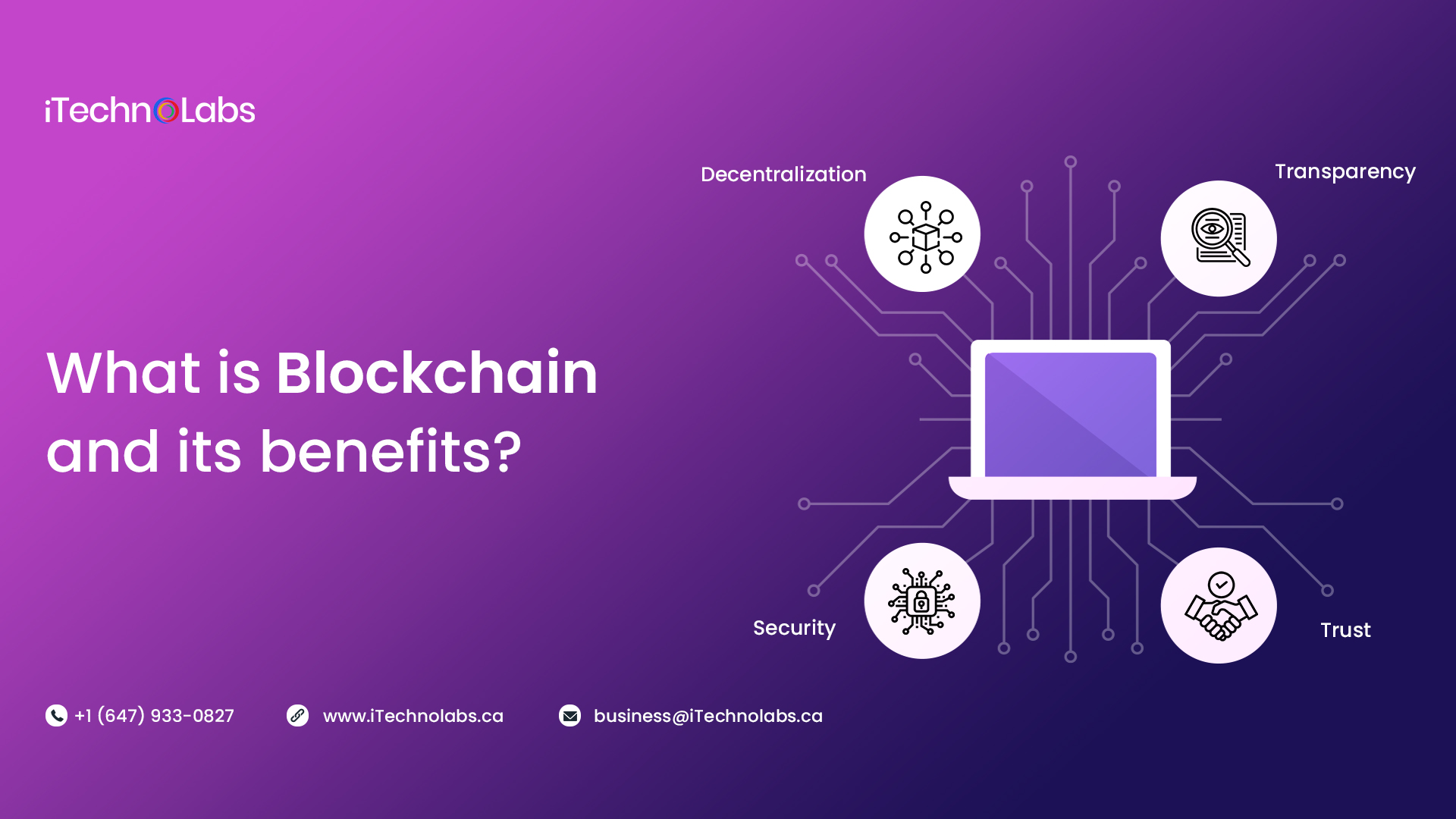 A blockchain is a chain of time-stamped digital records, known as BLOCKS, which are linked together cryptographically. In simple words, a blockchain is an essential digital ledger of transactions that is duplicated and circulated across the entire network of a computer system. This system works in a very efficient way, the records can be traced anytime and nobody can destroy the information.

Benefits provided by this technology are:-

Now, let’s learn what is required to construct an effective, scalable and secure blockchain-based application. 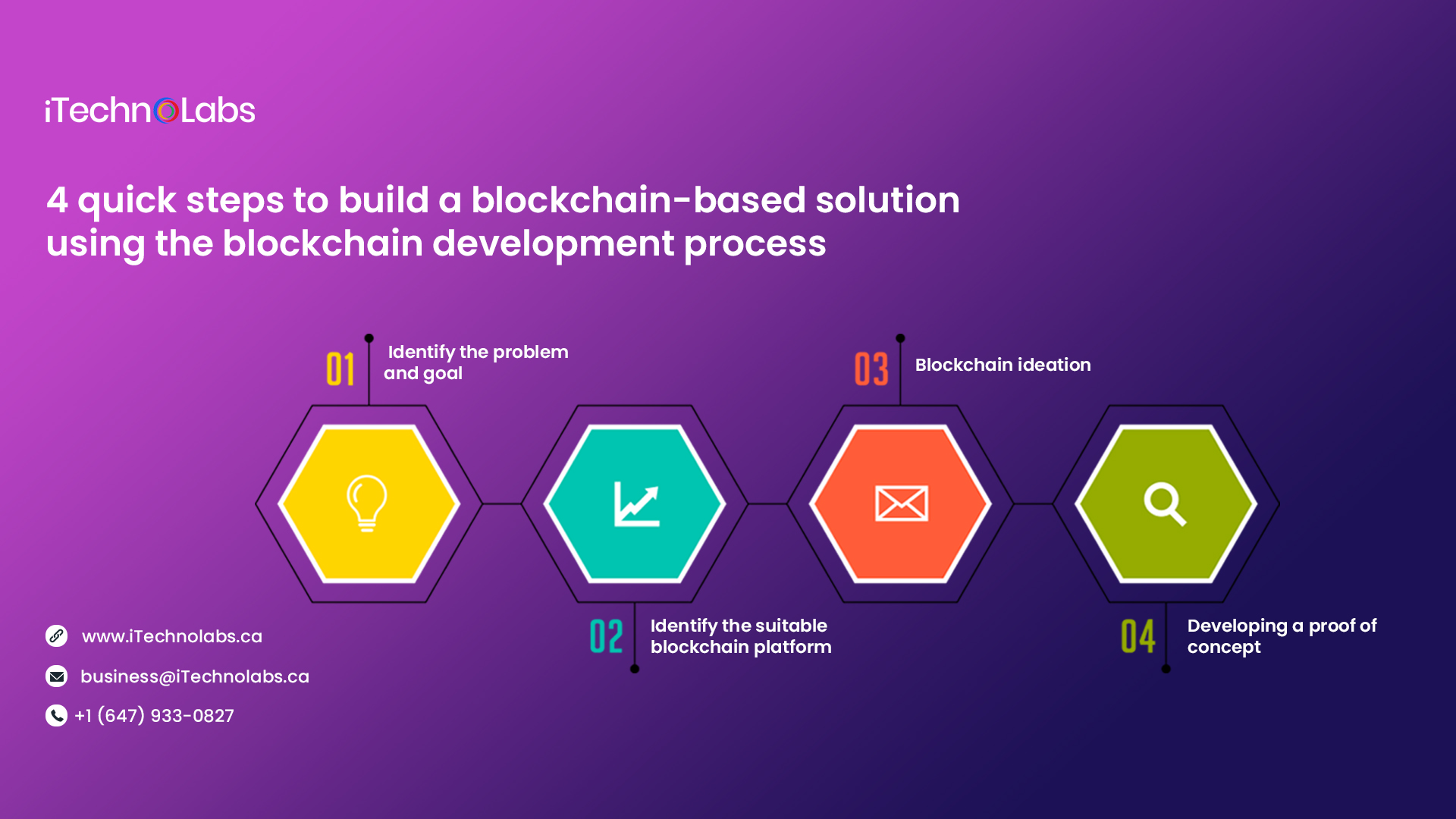 The very first requirement before getting into the blockchain development process is, understanding the problems of your current situation. First, you must know all the possible problems which must be solved. Always know whether blockchain would benefit your business capabilities or not. You can also migrate your current application to the blockchain network instead of building everything from scratch. After identifying the problem and other project requirements, iTechnolabs will offer you an affordable product, designed to provide you with maximum value.

A blockchain platform is required to build a decentralized application without having to create blockchains from scratch. The blockchain platform you need depends on the consensus mechanism and the problems which are expected to be solved. iTechnolabs offer the best blockchain development services in the market with their consulting practice. It helps executives to understand which blockchain platform can fit perfectly into their business model.

List Of Blockchain Platforms Which You Can Use Based On Their Functionality And Mechanism:-

Ethereum: Ethereum is an open-source and public blockchain-based distributed computing platform, featuring the functionality of smart contracts. Ethereum uses a proof of work algorithm called ‘ETHASH’ which requires more memory to make it difficult to use. Using Ethereum you can build a decentralized public application with smart contracts.

Smart contracts in Ethereum are written in Solidity programming language, which is a subset of JavaScript. Use Remix IDE, an open-source tool provided by the Ethereum organization to create smart contracts straight from the browser.

Hyperledger Fabric: Hyperledger fabric is an open-source blockchain platform suitable for building enterprise applications. It supports distributed ledger solutions for permission networks where all participants have authorized identities. Built on a modular architecture, Hyperledger fabric has the potential to maximize the flexibility and resilience of blockchain applications. The pluggable architecture includes encryption and consensus.

Hyperledger supports small contracts and calls this feature “Chaincode”. A chain code can be written in any of the programming languages and executed in containers. If you want to build a decentralized solution for your enterprise which should not be available to the public, choose Hyperledger Fabric for your project.

This consensus mechanism needs to meet the two requirements to work fairly. Firstly, did the lottery winner choose a wait time randomly? Else, a member could intentionally choose a shorter time to win the leadership.

Secondly, did the winner actually complete the specified amount of waiting time?

Smart contracts in Hyperledger Sawtooth can be written in various programming languages, including Python Go, Javascript, and Rust and deployed on their respective IDEs.

If you want to build an enterprise-grade and scalable application, it is ideal to choose Hyperledger Sawtooth for your project. It is the crucial stage of the blockchain development process as the entire project depends on the platform you are going to choose. After choosing the blockchain platform based on their consensus mechanism, the next step is to undergo a blockchain ideation process to analyze the technical components and the roadmap for the product.

After identifying the problems to be solved and the blockchain platform for building the application, the next step is to brainstorm ideas and business requirements. You need to evaluate, formulate and prioritize the use case of blockchain applications. Decide what components should be added as on-chain and off-chain business entities. Prepare a roadmap of the product, i.e., when are you going to release alpha, beta, and ready-to-launch versions of the application.

The main objective of this blockchain ideation is to design a conceptual workflow and blockchain model for the application. While formulating ideas, you also have to make decisions related to the front-end programming language, external database, and servers for your application. For your high-security business needs, iTechnolabs offer end-to-end decentralized development services. After preparing the ideas you should develop the proof of concept to show the viability of the product.

A proof-of-concept is a way to demonstrate the practical potential of a blockchain project and it can either be a theoretical build-up or a prototype. For creating the proof of concept for your project, you can follow the following steps:

Every project requires theoretical build-up so that the end-users could understand the efficiency and feasibility of the product. You can also create proposals to explain the parameters of the product

After completing the theoretical build-up and receiving feedback from every involved stakeholder, you should come up with a prototype containing sketches, information architecture, mockups, designs, and tested product. Once the stakeholders approve the PoC, start focusing on preparing the visual and technical designs for the application.

Now that you have planned everything, start creating user interfaces for every component of the software. Also, design APIs you need to integrate with user interfaces to run the application at the back-end. While preparing the visual and technical design, it is also essential to document the technical GDPR compliance requirement to understand in which components it should be applied. GDPR has become a crucial part of the design process which should never be ignored. After designing the user interfaces and admin console for the application, you are ready for the development process.

Development is the most important stage of the whole process in which you should be prepared for building the application. There are Top 13 Real-World Applications of Blockchain Technology available, which might help you.

In this particular stage, you are required to build APIs for distinct use cases of the application. But do you know why we need APIs?

Common reasons for the use of API –

Then, the application jumps to the next stage, i.e., alpha where the developers test the software using white-box techniques and the software might not contain all the features.

After the alpha release of an application, it is prepared for beta release. During Beta Phase, the software contains the complete feature set, but it might have unknown bugs.

The developers provide a beta version to a specific group of people outside the organization to test the application’s functionality.

Once the beta version is ready, the application gets prepared for the Release Candidate version. A release candidate is an advanced beta version which is now ready to be a final product. When the application is tested thoroughly, it is moved to the production phase to get ready to be delivered. Now, it is time to deploy the application to make it available to the end-users. Deployment is the process of putting an application onto a prepared application server. Before an app goes live, it should be deployed on the test network to test its functionalities.

If your application has both off-chain and on-chain business entities, i.e., it is a hybrid solution, it should be deployed on the cloud server and app store/play store. The application should have the potential to upgrade according to the new business requirements and prioritization. For example, if you have to upgrade the smart contract, later on, you should be able to deploy the new contracts seamlessly.

Design and develop the application in a way that adding or upgrading components does not affect the existing application.

Are You Looking for a Blockchain Development Company 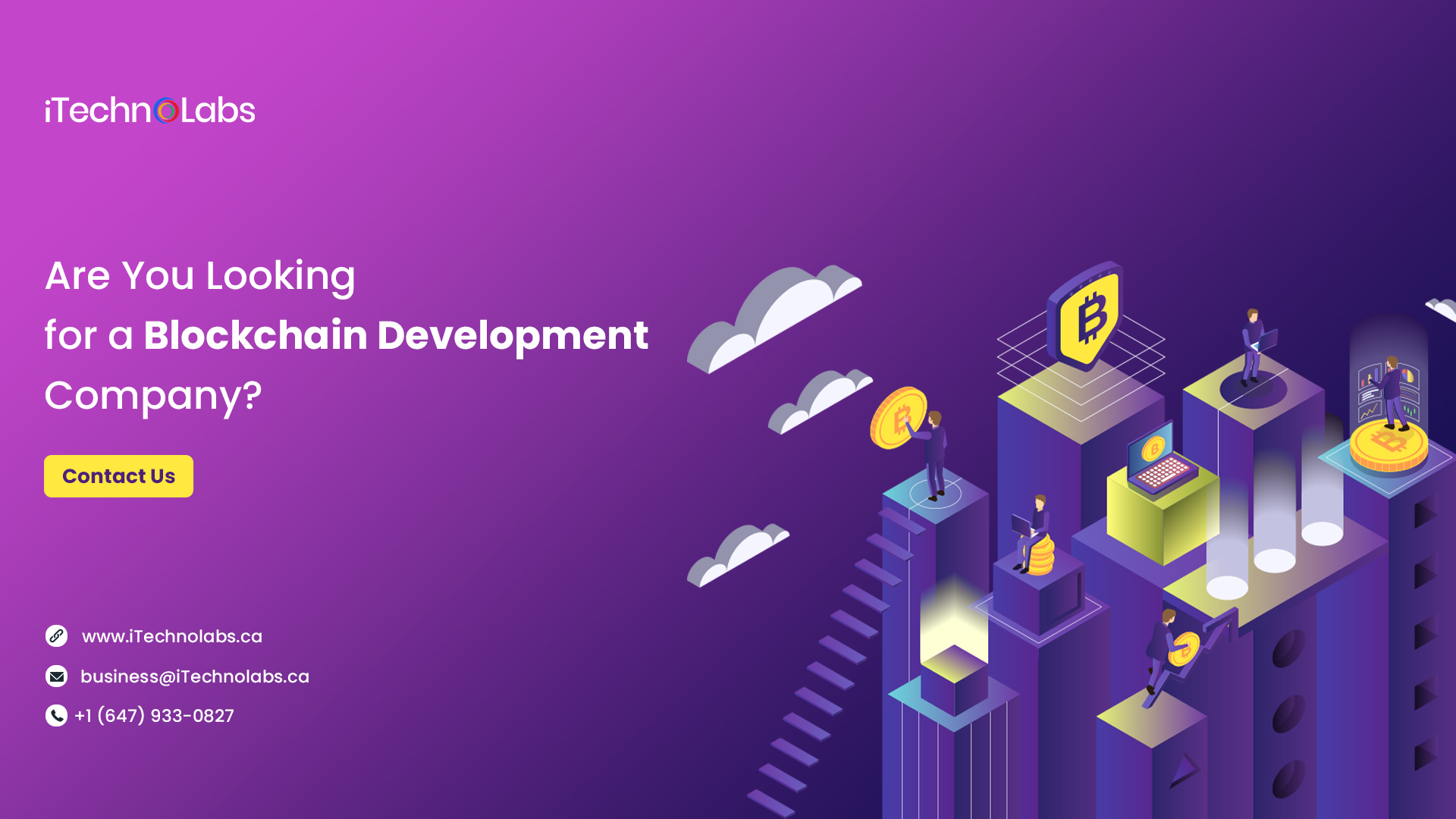 From identifying the goals to gathering the requirements, choosing the right blockchain platform, preparing designs for the software, and building and deploying the application, this article would help you to understand the step-by-step blockchain development process.

Blockchains are the future and iTechnolabs has offered us a vision to make our future bright. We offer various blockchain development services ensuring safe and secure transactions. The use of a traditional, transparent and efficient approach towards blockchain iTechnolabs has made it easier for us to trust the process. They strive to deliver us the best and most effective form of work.