An Ultimate Guide to Location Based Augmented Reality Based App

An Ultimate Guide to Location Based Augmented Reality Based App 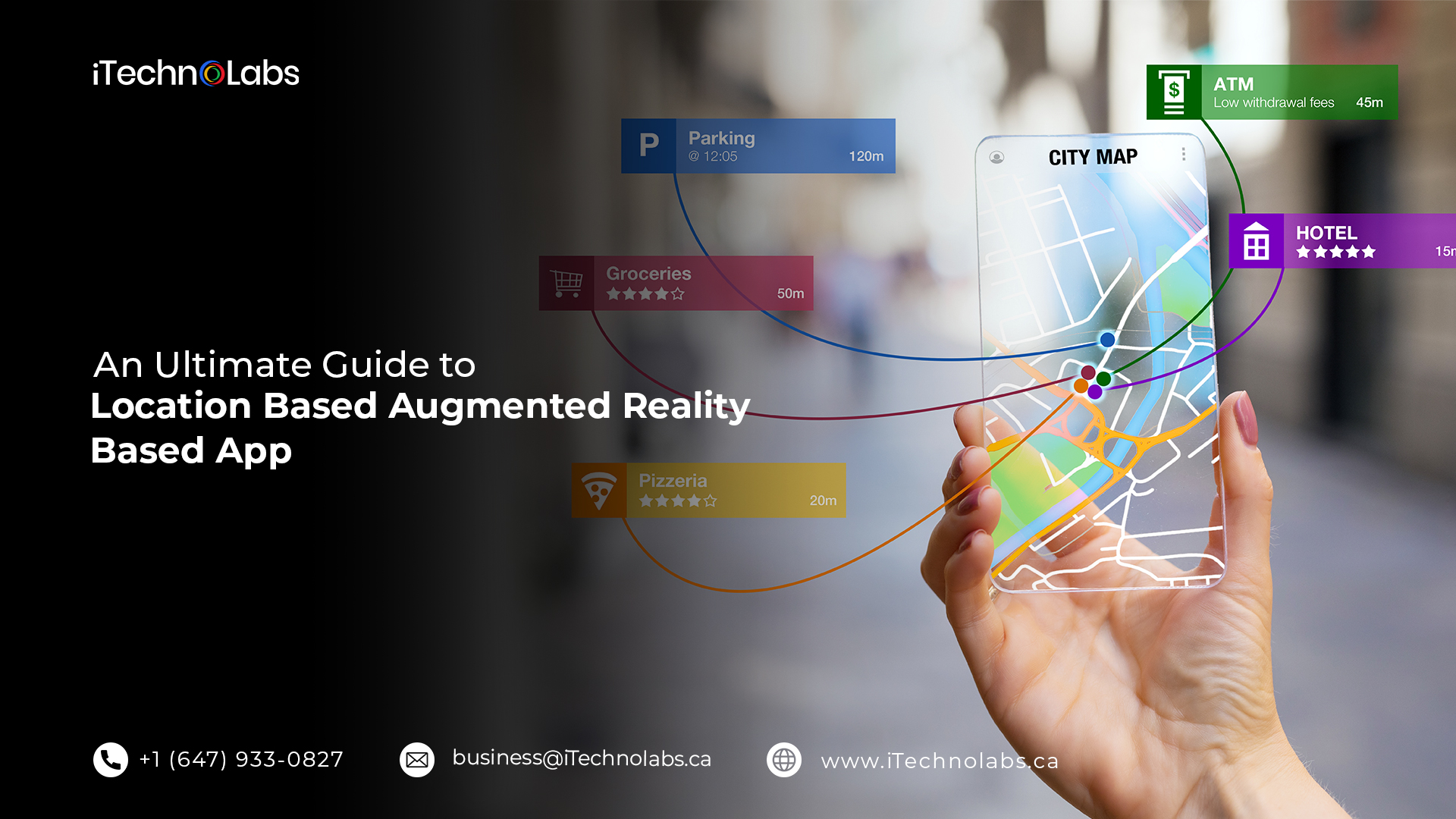 Location-based AR is an Augmented Reality that doesn’t use markers and is based on where you are. With this solution, you don’t need any unique features to figure out where virtual objects are.

Location- Augmented Reality Based App uses GPS, accelerometers, digital compasses, and other technologies to determine where a device is and where it is in space. Most modern cell phones have the sensors needed, so anyone who owns a cell phone can use this powerful technology. In general, there are four types:

Marker based AR: Augmented reality that is based on markers is also known as image recognition augmented reality or recognition-based augmented reality. This type of augmented reality provides more details about the thing after the primary focus of the technology is on recognizing it. AR technology based on markers can be used in many different ways, depending on the market. It figures out what is in front of the camera and shows the information on the screen. The marker is used to figure out what the object is, and then a 3D version of the thing replaces the title on the net. So the user can see more details and the object from different angles. Aside from that, the user can also turn the 3D image while the marker is being moved. This gives the AR app running on the system something to look at.

Marker-less or location-based AR: Marker-less Augmented Reality Based App is one of the most popular technology uses. It is also called Location-based AR because it is easy to find smartphone features that can figure out where you are. Most of the time, this kind of app is used to help travelers. Aside from that, it helps people find interesting places close to where they are. This method works by reading information from the mobile device’s GPS, digital compass, and accelerometer while guessing where the user is looking. This AR is all about putting location information about the things the user can see through the camera on the screen.

AR is one of the most straightforward augmented realities based on projecting the light on a surface. AR that uses projections is intriguing and fun to use. Light is blown onto a character, and you can interact with it by touching the projected surface. Because projection-based AR techniques are so standard, they can be used to lie about where, how, and how deep an object is. In this case, this lets the user think about the structure of different things and study them more deeply. This technology has a lot more to offer in every way. This technology is used to make a virtual object that can be used in much larger Augmented Reality deployments.

AR, based on superimposition, is easy to understand from the word itself. This AR gives you a new way to look at the object in focus. This is done by replacing the whole or part of the view with a view of the object with more information. Object recognition is a vital part of the process when a picture of an object is changed to an augmented view.

Most augmented reality apps today fall into the first two categories based on markers and where you are. Marker-based augmented reality mainly uses image recognition to show virtual information on top of particular objects.

Location-based AR apps can only work if geopositioning and augmented reality technologies are used correctly and show accurate data. This kind of AR app uses what are called “points of interest,” which are special geo markers.

First, the app needs to figure out what these geo markers are. This means finding out where the phone is right now. GPS is one of the most well-known technologies for this, but there are others, including ones that can be used indoors. AR apps use data from a digital compass and accelerometers, and GPS. When the app finds a particular point of interest, it makes augmented reality elements appear on top of the real world. These elements include music, animations, videos, images, and text. Some apps let users move virtual objects around, but some don’t.

Effects of LBAR applications on the future:

Using markerless location-based augmented reality apps can be a great way to make traveling more fun. So, it is now used a lot, especially in this area. It helps tourists find new places to go and find the most popular things to see quickly on their phones in real-time. Augmented reality based on where you are can be used in navigation apps to make them much more helpful. For example, a traveler can point the camera at the street to find the closest restaurant.

How to make a Location Based Augmented Reality Based App based on where you are? 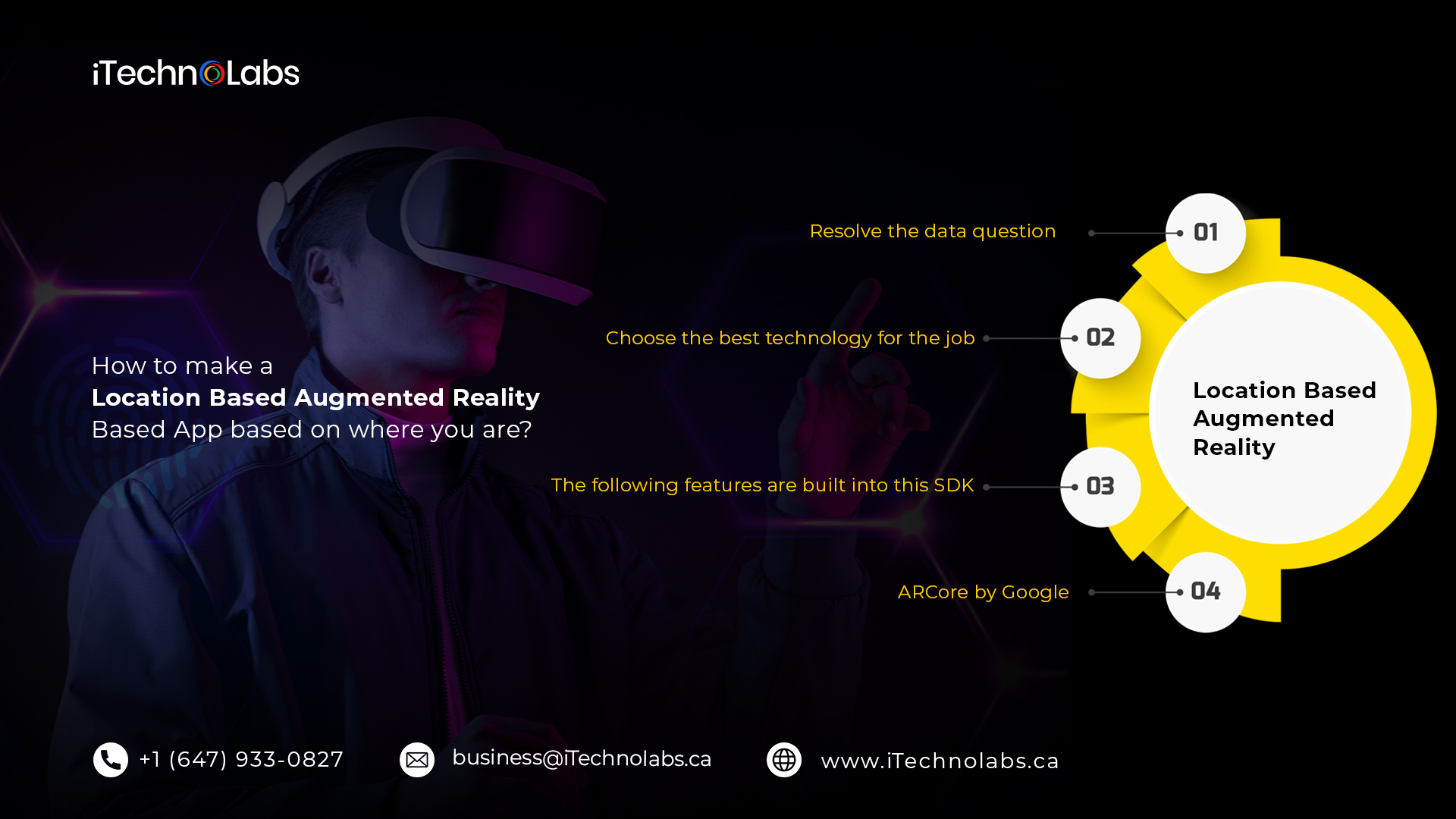 Now we’ll talk about how to make the location-based augmented reality app.

First, you should decide what information you want to add to the real world. I mean, it’s one thing to work with text data or put images on top of each other. But working with custom 3D objects is a whole different thing. You might need to use Unity or another engine in this case.

2. Choose the best technology for the job.

The tech part is essential. I’ve already talked about well-known technologies like ARCore and ARKit. Now is the time to look at them with more care.

3. The following features are built into this SDK:

Computer vision and camera data are needed to get an accurate picture of the environment;

Support for environments that are both horizontal and vertical;

Setting the amount of light on virtual models by figuring out the level of lighting;

Both the Unreal Engine and the Unity Engine are supported.

Mapping is probably one of the best things about this platform since you’ll use it a lot when making your location-based AR apps. It can track movement and find surfaces that are both vertical and horizontal.

Here are its most essential parts:

Important Article: What is Supply Chain Analytics, and Why is it important for business? 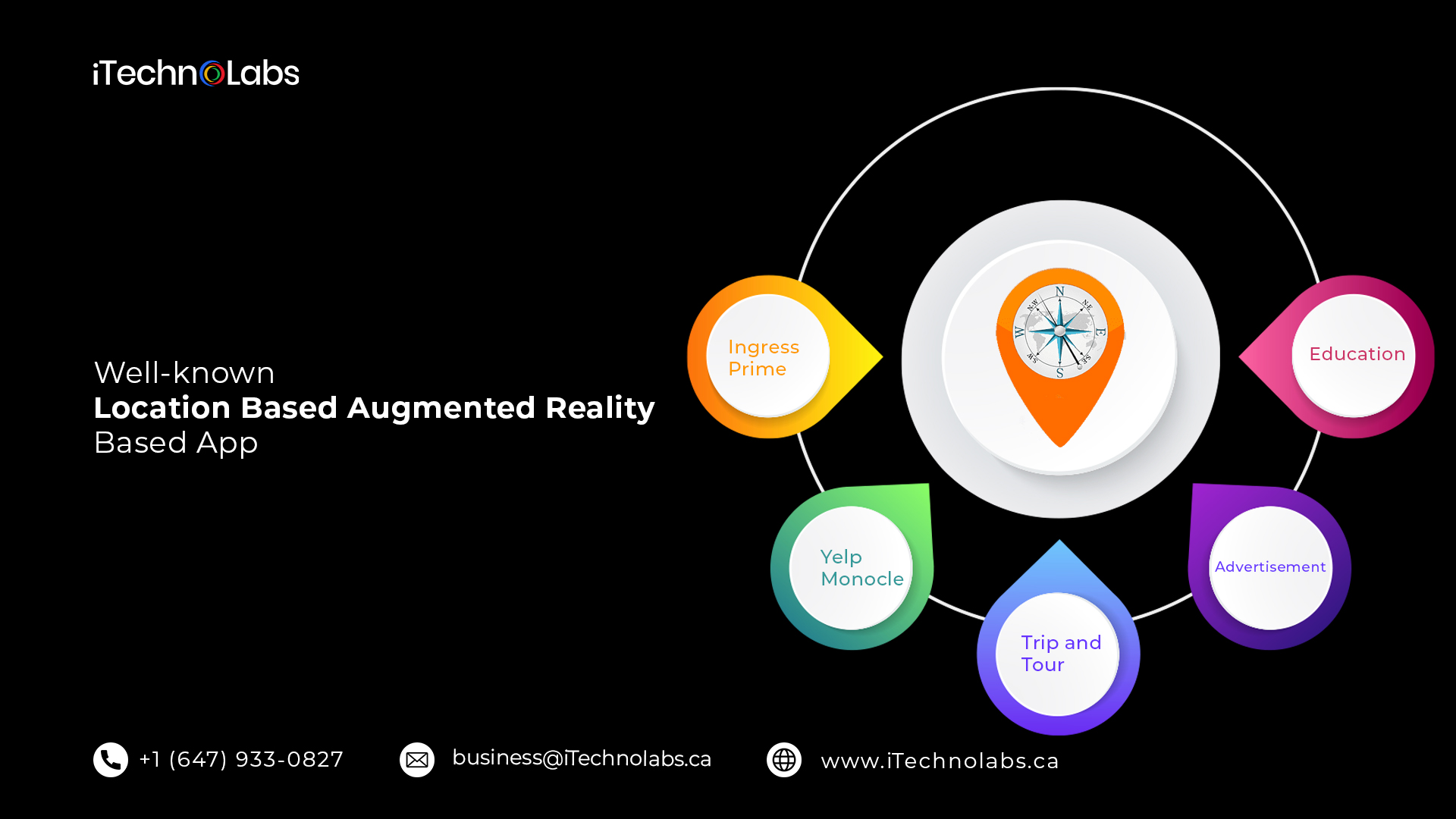 Ingress Prime was one of the first mobile games to use augmented reality to show where you are. Late in 2013, Ingress, the first version of Ingress Prime, came out for mobile devices. The game lets players use GPS on their phones to find and connect with portals in the real world.

Yelp is another AR mobile app that has been around since 2009 and has location-based features. This app uses the phone’s compass and GPS to help you find your way. It shows information about nearby restaurants, bars, and other places by using GPS to get the information it needs. Aside from that, it also shows how the site is rated and what people have said about it. Yelp Monocle helps people get around in cities they don’t know well.

When a user plays a location-based AR game, the mobile device’s sensors send geo-marker information to the game’s server. This helps the server find points of interest and create virtual content with which the user can interact in the real world.

Location-based augmented reality is a big step forward for the tour and travel business. It has become a great way to improve the travel experience. Also, it makes it easier for tourists to find new places to visit. Users can quickly find the most popular places to visit in real-time using the augmented reality app. This makes the navigation system that comes with the navigation mode work better.

AR helps the advertising world in every way. With this immersive technology, you can promote products and services in a whole new way. AR with location-based services is giving businesses new ways to market their brands. It works better than the old system of ads in newspapers and magazines. AR technology makes people more likely to buy goods or services online.

AR technology adds animated, colorful 3D or 2D objects to make learning fun for students. When it came out, augmented reality played a big part in the education field. AR education apps that use markers are becoming more popular in this field. With the ways location-based AR can be used, education is getting bigger. AR (marker-based) is an excellent way for students to learn more about complicated subjects in fields like astronomy.

Do You Want to Build a Location Based Augmented Reality Based App? 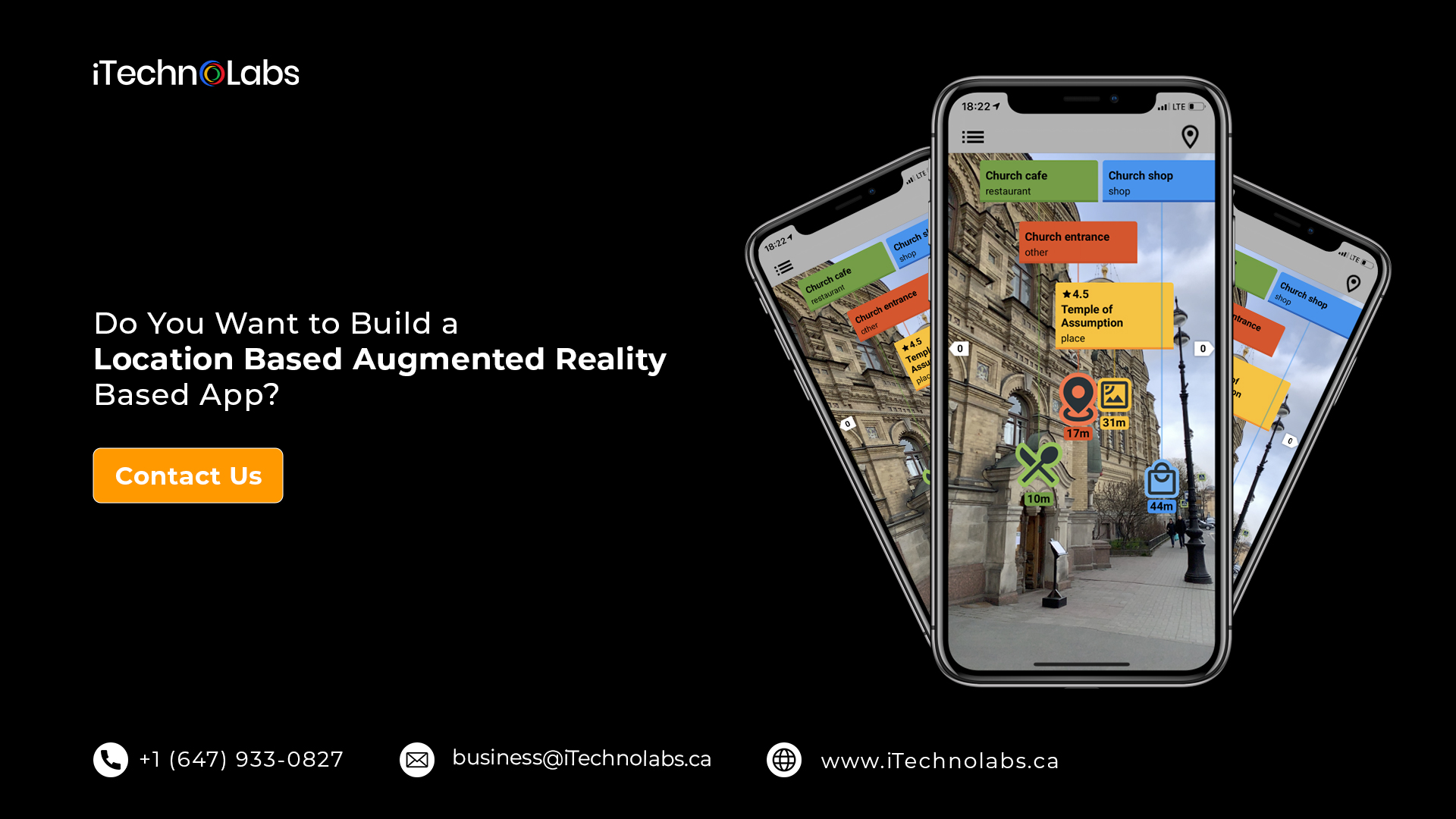 Location-aware devices are a big part of that list. As big data analytics matures, location intelligence will likely become an even more critical part of any organization’s digital transformation toolbox.