How Much Does It Cost to Hire Mobile App Developers in the USA?

How Much Does It Cost to Hire Mobile App Developers in the USA? 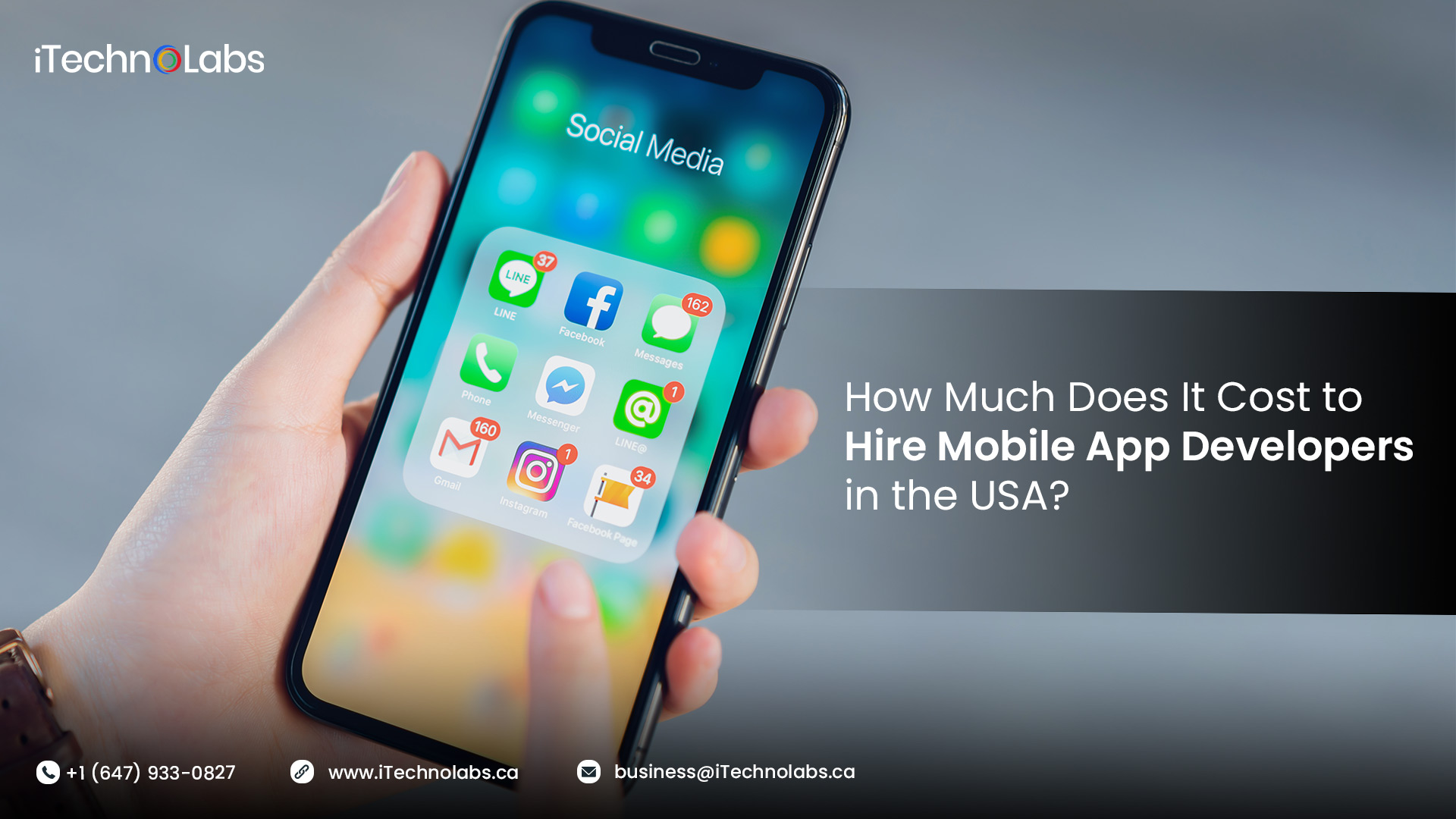 Both ways have good and bad points. Let’s look at both to see how they affect the cost of making an app.

The best app development companies beat the competition quickly by education from their mistake. If you work with a team like this, you won’t make the same mistake. App development is a multi-step process that requires careful planning and a good schedule, both of which are based on experience.

If you make a mobile app in-house, you can lower the cost of app development, at least at first. However, over time, as you fix bugs caused by your lack of experience, you can catch up to the price you would pay if you hired an app development company.

Cost of hiring an app developer vs. having one on staff

After a few years on the market, an app development company has a lot of experience making mobile apps for various platforms. At this point, app projects can be fairly complex, using AI, ML, IoT, and other advanced mobile technologies. Working with this kind of team will help you grow faster because they are bright and learn from their mistakes on other projects. Making an app requires careful planning and sticking to a strict deadline.

Let’s say you decide to make your mobile app. In that case, at least at first, you can cut the cost of hiring an app developer. However, over time, as you fix bugs caused by your lack of experience, you may pay the same amount as if you hired an app development company.

We wish we could tell you exactly how much it will cost to hire an app developer. Still, we can only give you a rough idea because the cost of hiring an app developer depends on several factors that change with each app development process.

How to figure out how much it will cost to make an app?

As much as we’d like to put a number on the app development cost, we can only come up with an estimate. This is because there are so many parts to the app development process that all affect the final price. A few things can help you figure out how much it will cost to make an app.

Still, there are some average or typical costs for app development projects that can be used for different kinds of apps. These benchmarks have a wide range because they are based on data from several companies. These companies figured out these app development costs by researching customer projects. 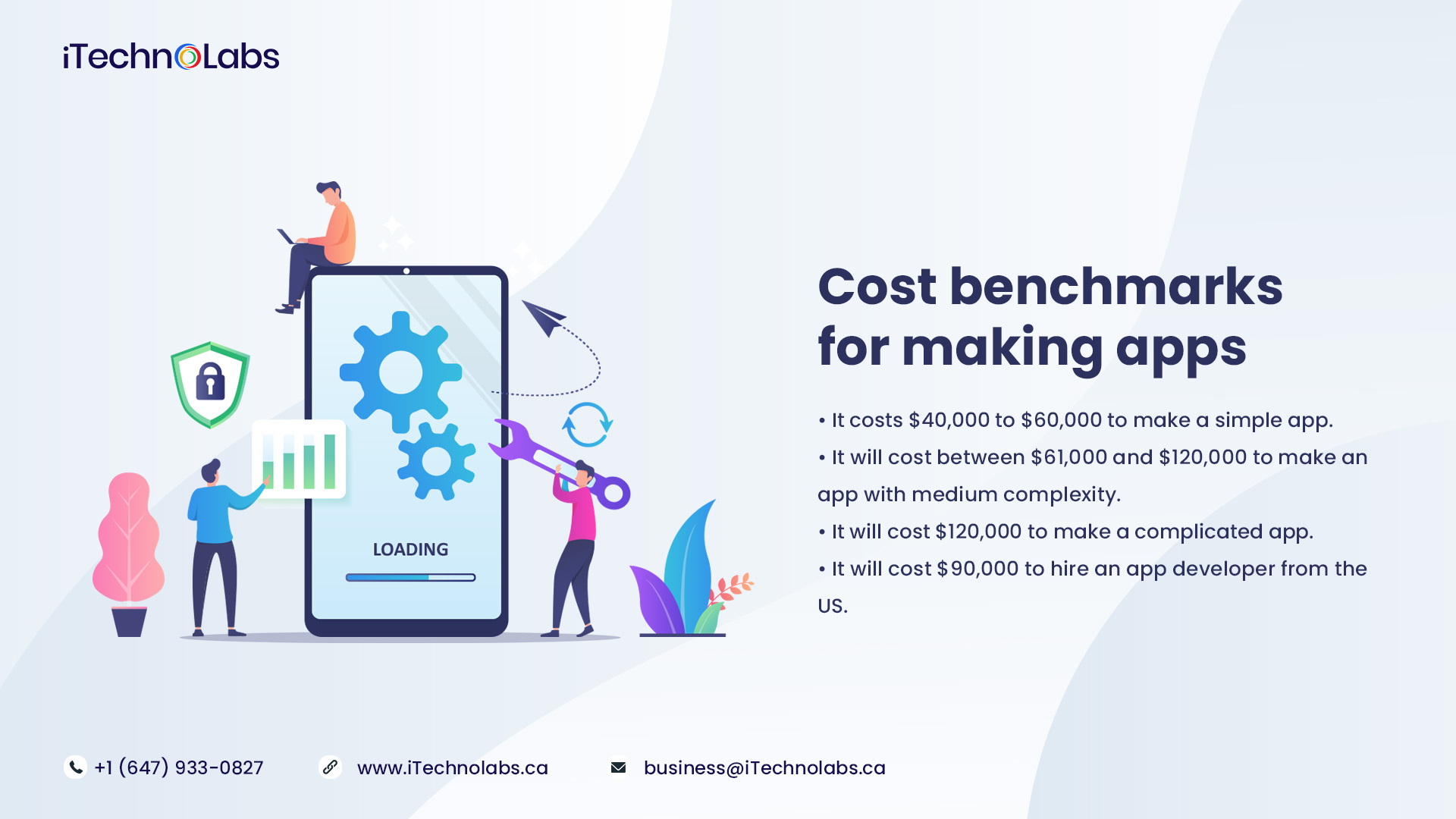 A long time ago, making an app for iOS and Android cost very different amounts. Several studies done by well-known app development companies show that this gap is now almost meaningless. Today’s most important thing about a mobile app is how hard it is to use. The app can be simple, medium, or hard to use. In the table below, you can see how much it costs to hire an app developer from the US and how much it costs to make a project app.

Remember that the costs listed above, including hiring an app developer, are only estimates. They are meant to give you a general idea of how much it might cost to make an app based on its complexity. The cost of app development shown above doesn’t include the cost of app updates, which are a necessary part of the lifecycle of every mobile app and vary a lot depending on the version and how vital each update is.

Things that affect how much an app developer costs: 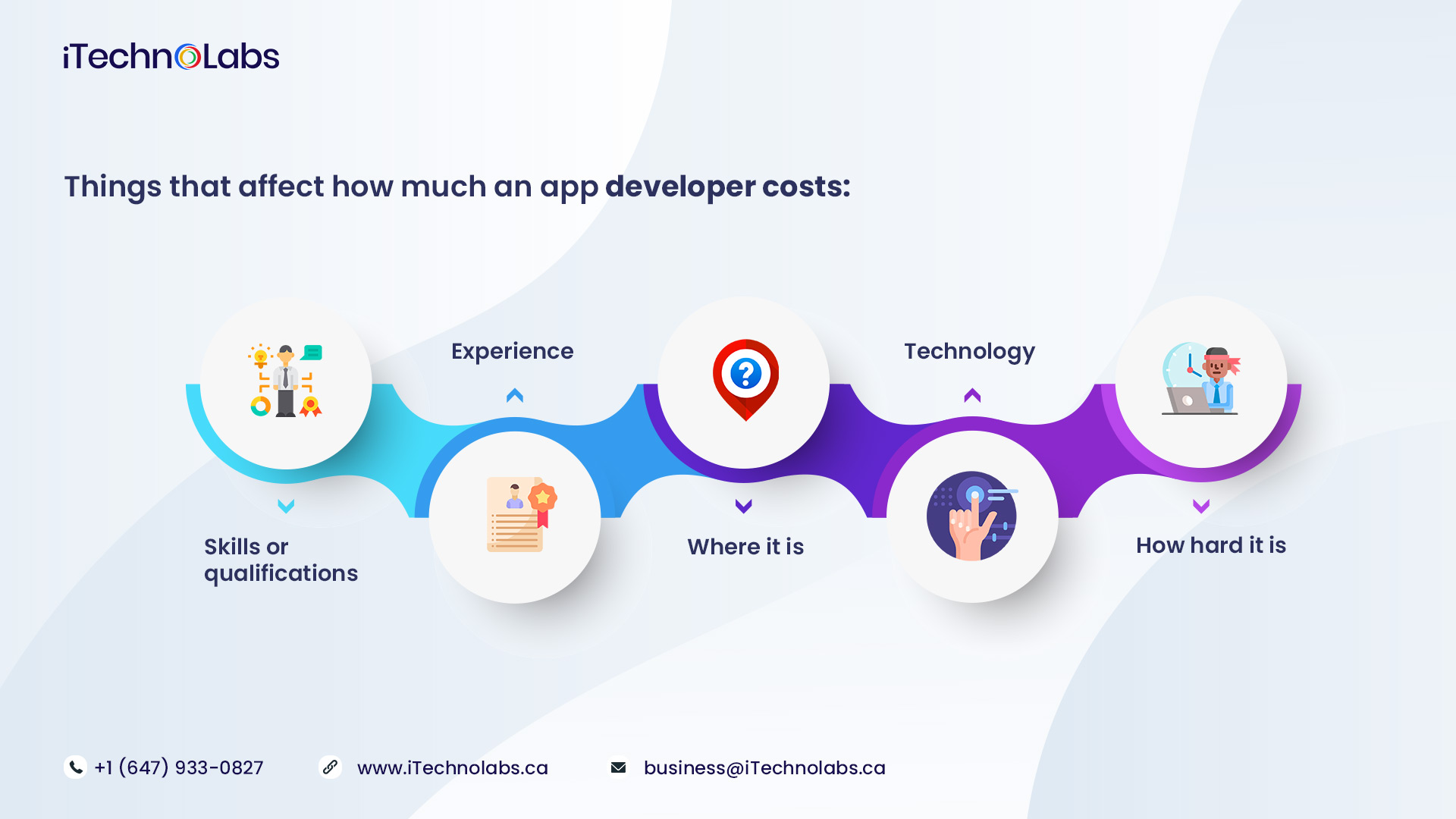 It can get a little complicated if you want to know what factors affect app developer rates per hour because many of them involve the price differently. These are the most important things:

Put, where did the developer go to school, and what kind of skills do they have? The cost per hour goes up the more skills someone has. Some of them, like UI/UX, go hand in hand and usually don’t make the mobile app developer’s hourly rate go up too much. However, if you are trying to hire a full-stack developer to cover multiple development stages, it can significantly impact the hourly rate.

A mobile app developer with years of experience (and good reviews!) will charge more per hour than a developer who just finished a course in the same field. Even though experience doesn’t directly affect the quality of the work, it significantly impacts how much it costs to hire someone.

The location stands out as one of the most important things that affect the hourly rates. It has a lot to do with the cost of living and the standard of living in the country, as well as how complete the job market is. For example, comparing how much app developers accuse each hour in the US and Ukraine, we can see that American coders can be seven eras more costly than Ukrainian ones.

The tech stack you’re looking for can also change how much it costs per hour. The IT market is flexible and changes quickly, so programmers quickly fill in-demand niches. However, hiring a developer specializing in a rare technology, like a programming language or framework, usually costs more.

The cost depends not only on the hourly rate but also on your project’s complexity. Some developers like to stick to patterns they’re already familiar with and don’t like to leave their comfort zone. Others, on the other hand, love a challenge, but this usually hurts their rates.

How to Hire an App Developer at an Affordable Price? 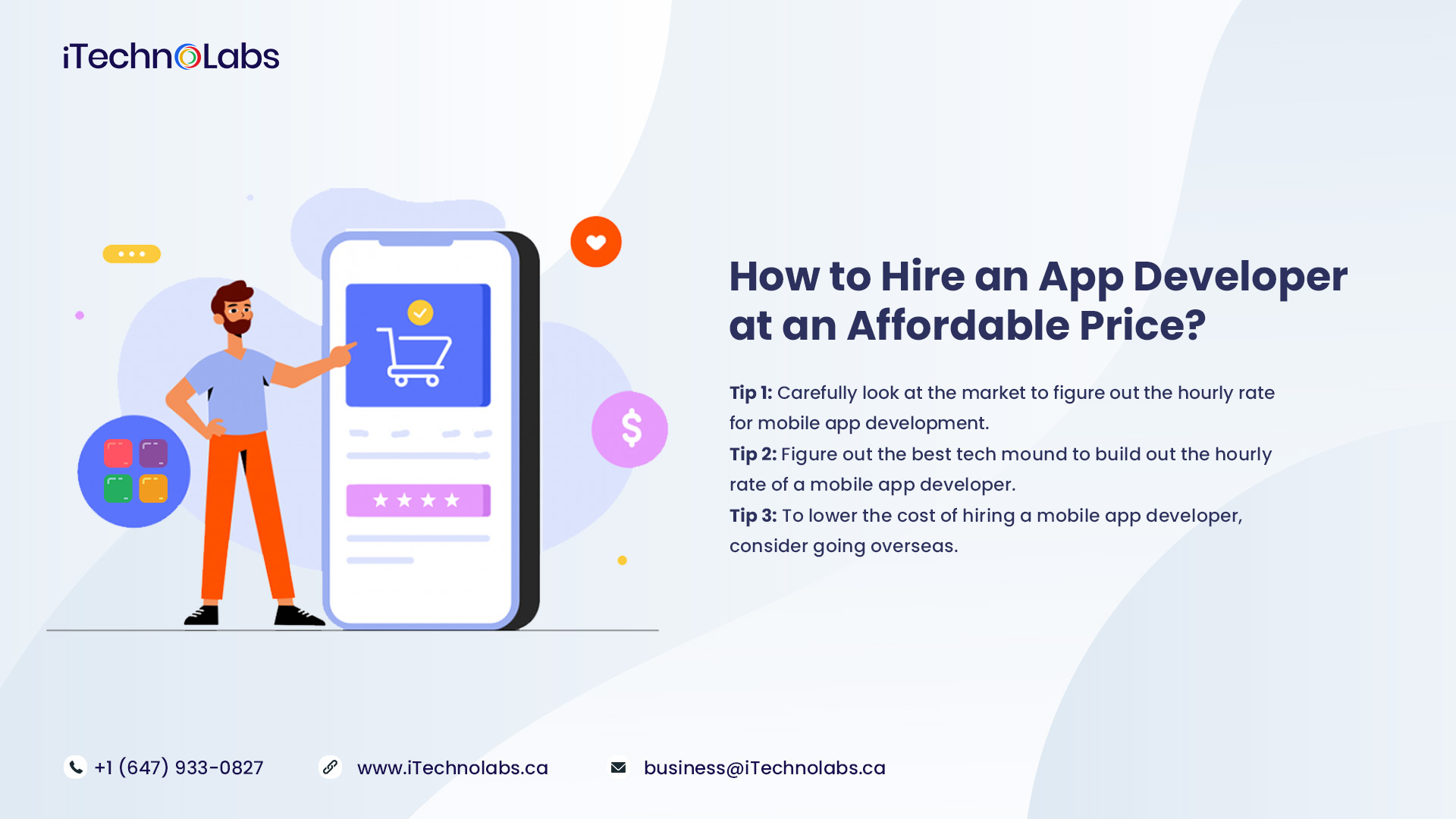 Not only is it essential for small businesses with small budgets to know how a good deal app developers arraign per hour, but it’s also essential for medium-sized businesses that want to get the most out of their investments. In this case, just knowing the hourly rates might not be enough. That’s why we put together this list of tips on how to hire the best person.

Tip 1: Carefully look at the market to figure out the hourly rate for mobile app development.

When a potential employee tells you what salary they want during an interview, you need to know how that compares to the average hourly rate on the market. Knowing how much a developer costs per hour, you can also figure out the project’s preliminary budget.

Tip 2: Figure out the best tech mound to build out the hourly rate of a mobile app developer.

Since technological credentials significantly affect how much it costs to hire someone, it’s best to choose them immediately. After that, you’ll know how much a specific tech stack costs and won’t pay too much for skills you don’t need. Also, choose the platform where your app will live.

Do You want to Hire Mobile App Developers in the USA? 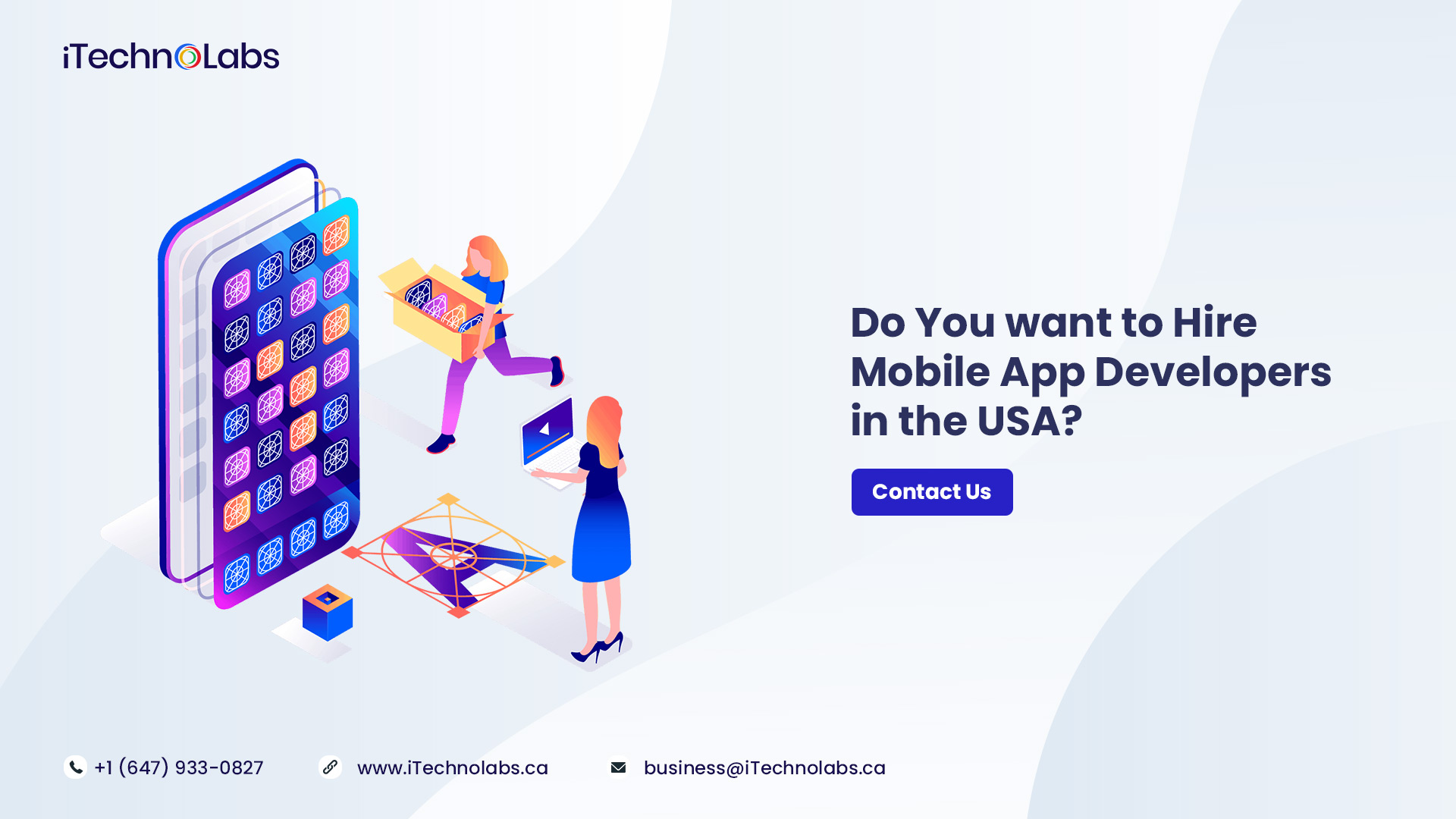 When businesses try to figure out how much it will cost to make their future app, they need to consider the development team’s location and the app’s complexity. These things significantly affect how much it will cost to make the app. Since both iOS and Android have a lot of users, it makes sense for businesses that want to go itinerant to make an app for both platforms simultaneously. Because communications is the most expensive part of making an app, it makes sense for companies to try to save money on data storage, scalability, and third-party API integration if they have more than one option.

In addition, the COVID-19 pandemic has caused app developers to move and work from home, significantly affecting how much it costs to make a mobile app.