AR Vs VR: Difference Between Augmented Vs Virtual Reality

AR Vs VR: Difference Between Augmented Vs Virtual Reality Proficient developers and even companies are adopting AR or VR both in education, marketing, exercise, gaming, entertainment, and many different fields. But, few may be uncertain of which one to follow. There are a great many differences between the both that many people are not aware of.

This ultimate guide will clearly explain your Augmented Vs Virtual Reality and answer the question of what may be better. 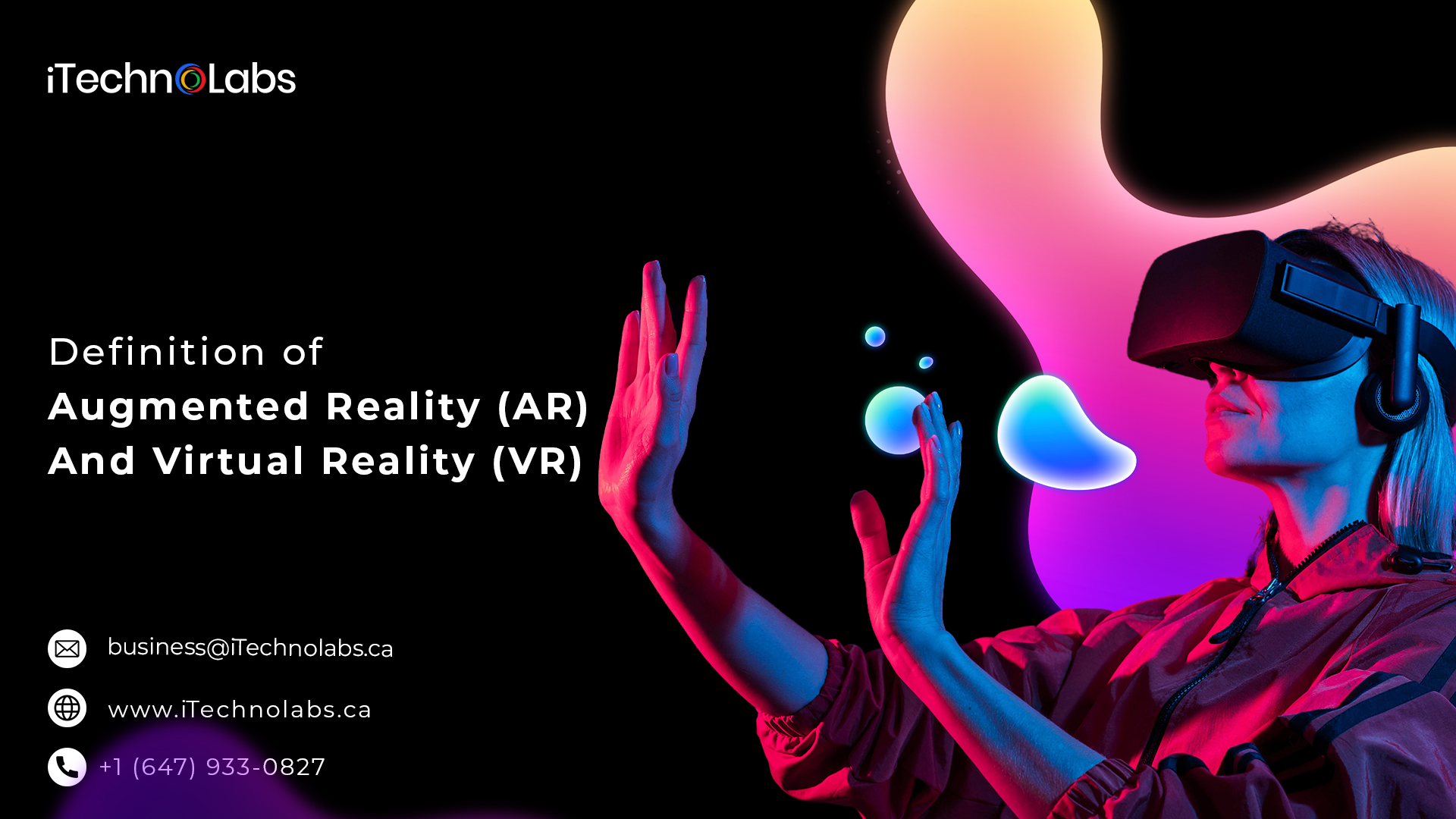 The motive of virtual reality is to immerse yourself in the great digital 3D content–many of which imitate the real-world, even though they can be imaginary objects. Immersion implies having the great feeling as though you are a crucial part of the digital environments you are viewing at.

Also, it implies interacting with the digital content as well as the virtual 3D-like-size objects as you would in reality.

Preferably, you’re browsing and even navigating through a computer-generated as well as imaginary virtual world. It will seem as though you are present in performing the things that have to be done there as you would, naturally.

Also, the user can interact with the holograms, as the user actually would do in reality.

How does AR work?

AR utilizes computer vision, depth tracking and mapping in order to show suitable content to the user. This functionality enables cameras to send, collect and process data to view digital content suitable to what any user is looking at.

In Augmented reality, the physical environment of the user is improved with contextually relevant digital content in real-time. You can experience augmented reality (AR) with special hardware or a smartphone.

How does VR work?

Virtual reality mainly focuses on simulating the vision. The users have to put a VR headset screen before his/her eyes. Thus, removing any interaction with the real world. In VR, two lenses are actually placed between the screen. The user has to adjust the eyes on the basis of the individual movement of the eye as well as its positioning. The visuals on the screen can be rendered by utilizing an HDMI cable connected to a mobile phone or PC.

Utilizes speakers, goggles, and at times, handheld wearables to simulate a real-world experience. In virtual reality, you can even employ auditory, visual and haptic (touch) stimulation, so the created reality is immersive.

Here are the benefits of Augmented Reality:

Here are the benefits of Virtual Reality:

Here are the crucial applications of AR technology:

Here are the crucial applications of VR:

Related Article: An Ultimate Guide to Location Based Augmented Reality Based App

Difference Between Augmented Vs Virtual Reality – AR Vs VR 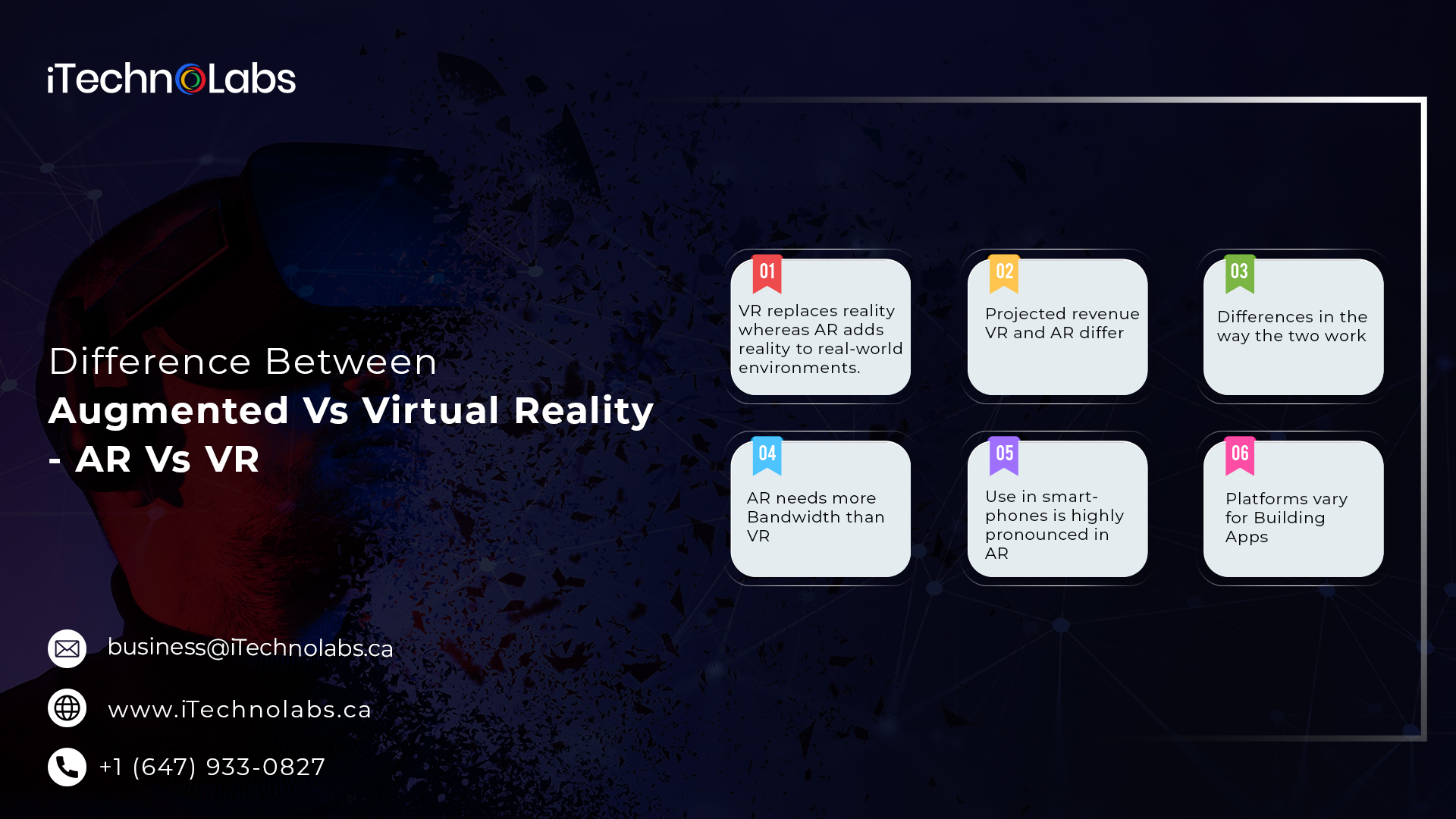 It’s time to go through Augmented Vs Virtual Reality and understand how they are different from each other.

A key difference between AR and VR is that while VR tries to replace every reality up to complete immersion, AR tends to bring more virtual by projecting digital information on top of what the user is already viewing.

Partial immersion is probable in VR, where the user is not completely separated from the real-world. Real full immersion is tough as simulating every human sense and action is impossible.

Since VR results in total immersion, devices need to hide the user from the real-world, for example, by blocking their field of view or vision to show VR content instead. But that’s just the beginning of immersion as there are more than five senses to worry about. But, VR systems have room tracking as well as user position and motion tracking, which would enable a user to move around as well as walk in a given space.

The projected revenue share for virtual reality was $150 billion whereas AR’s projected revenue was $30 billion. This may not be the right answer to the question of what is the major difference between VR and AR, but it clearly shows the speed of growth is different between the two.

3) Differences in the way the two work

The Virtual Reality Modeling Language or VRML experiences develop an interactive sequence of animations, audio, and videos, as well as URLs that can be captured by a client, app, or web browser to simulate virtual environments.

With AR, the AR platform makers (generally a barcode) or user location, and this will quickly the AR animations. The AR software will then quickly deliver animations to the markers or detected user locations.

AR applications need around 100 Mbps as well as a lower of 1 ms delay. Even though, AR needs around 25 Mbps for least res 360 degrees video, top quality mobile 360 degrees don’t deliver anywhere around the 360 degrees camera-level dynamic range as well as resolution. The bitrate enhances with an advance in mobile display technology. For VR, HD TV level resolutions need 80-100 Mbps.

5) Use in smartphones is highly pronounced in AR

It is feasible to utilize AR in 2D as well as 3D environments quite easily, such as on a mobile phone. In that case, the smartphone is utilized to overlay digital items on a real-life space. In VR, the only technique of browsing 3D content in a smartphone with no headset is 2D and one doesn’t experience any immersion. Therefore, it is explored quite best with a VR headset.

VR utilization is not so much marked in mobile phones as well as tablets, but PCs.

Applications created for PCs, smartphones and other devices as well as platforms as commonplace for VR and AR. Therefore, building AR apps is not similar to building VR apps. In case, where you would require to build 3D content, the platforms are similar.

Most of the above mentioned platforms combine VR developments with AR except some such as ARCore and ARKit. Few VR app development kits are solely for building VR.

Do You want More Information Between Augmented Vs Virtual Reality? 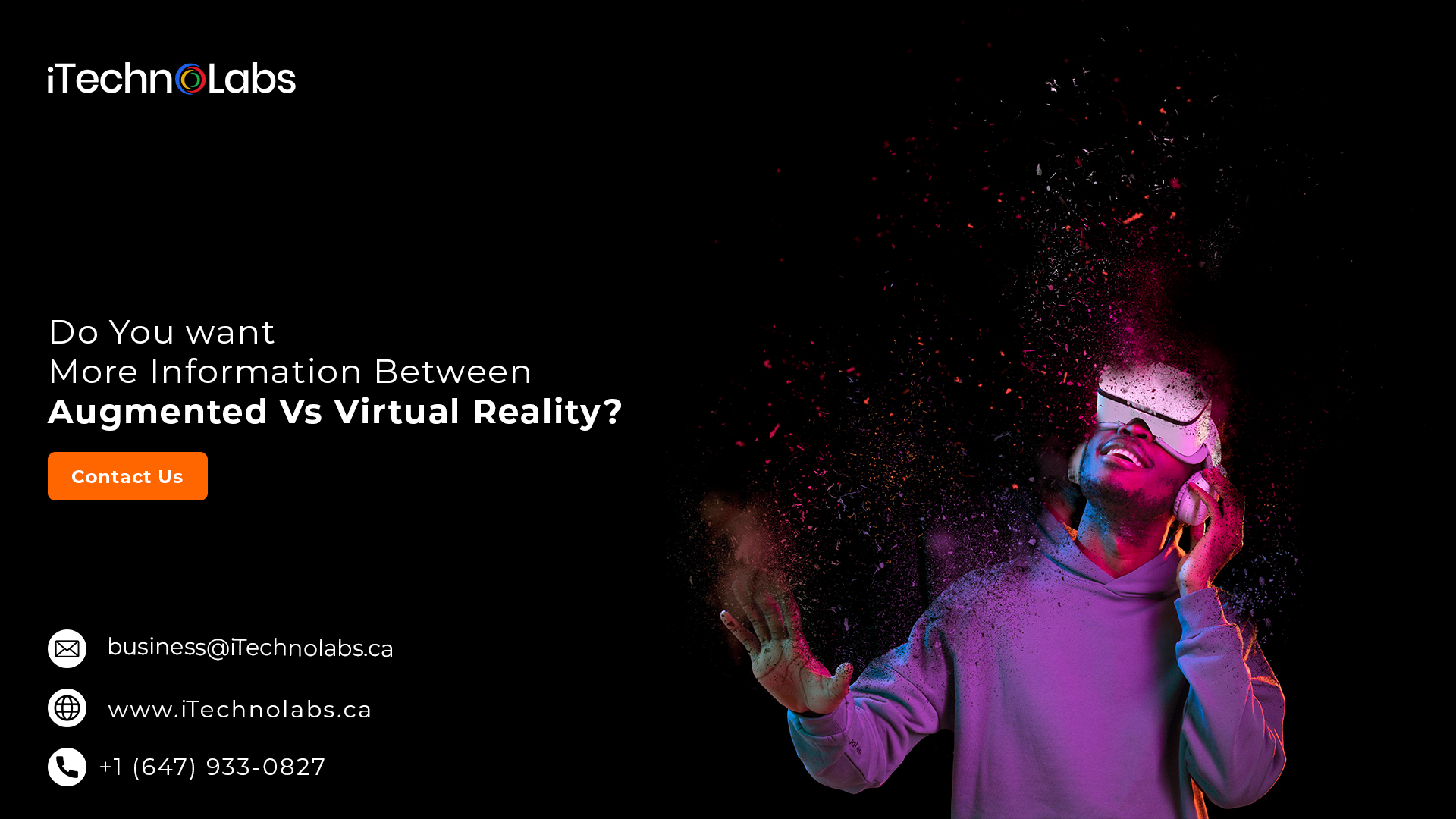 The right cross between AR and VR is known as mixed reality. This innovation is expected to become more important for customers and businesses soon. It’s simply based on allowing instinctive interaction with data while removing screen-based work. Rather, handheld devices can simply take over such immobile device tasks. The plus point is that it will be easier to target data anytime and anywhere.