Top 10 Skills To Consider When you hire iOS Developers

Top 10 Skills To Consider When you hire iOS Developers 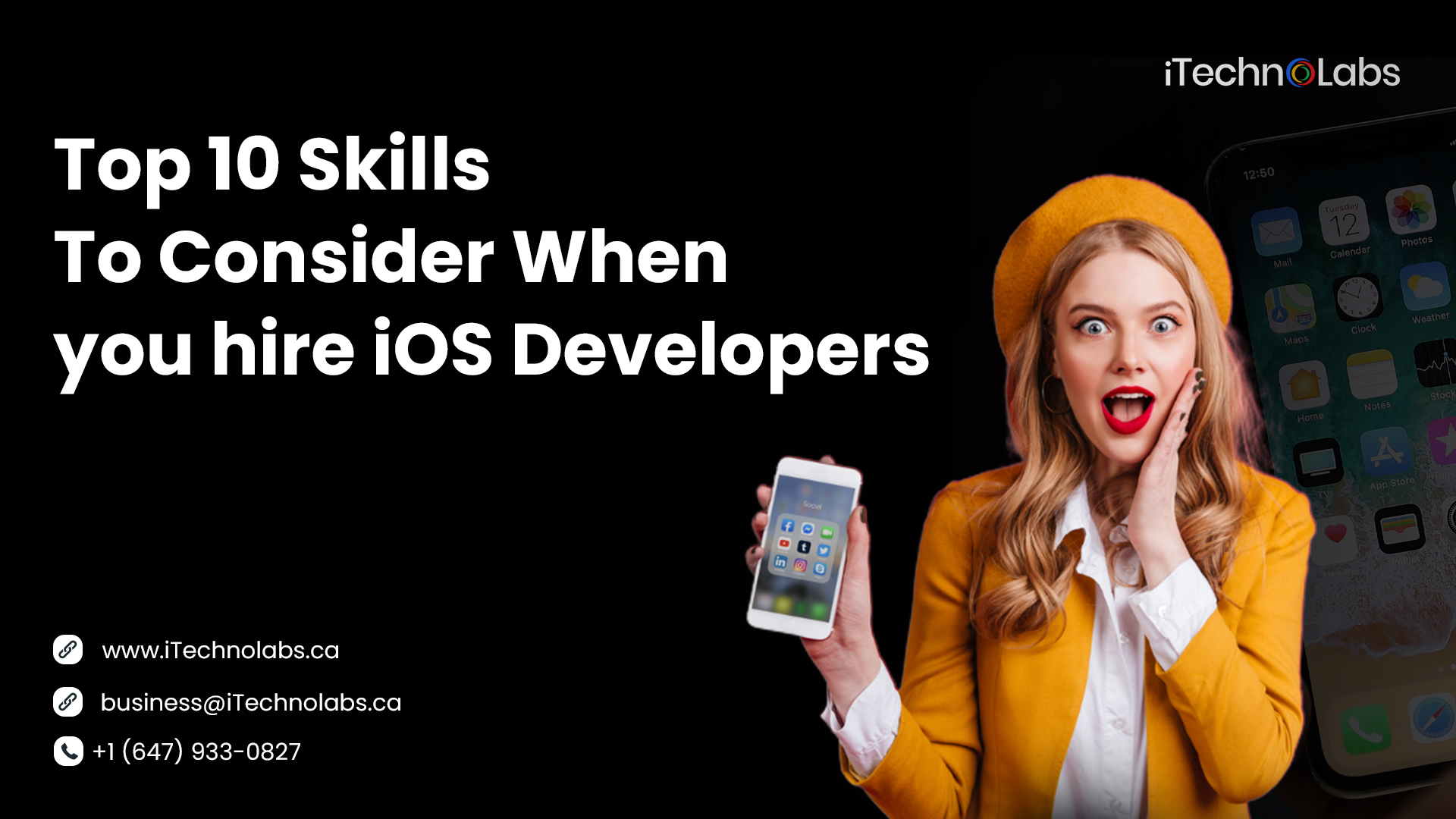 iOS is one of the most popular and efficient platforms for developing mobile apps. Since its birth, the field of iOS app development has experienced a tremendous expansion; as of 2021, there were over 4.22 million apps available in the iOS app store, making iOS developers some of the most sought-after workers.

Number of Apps in the Apple Store 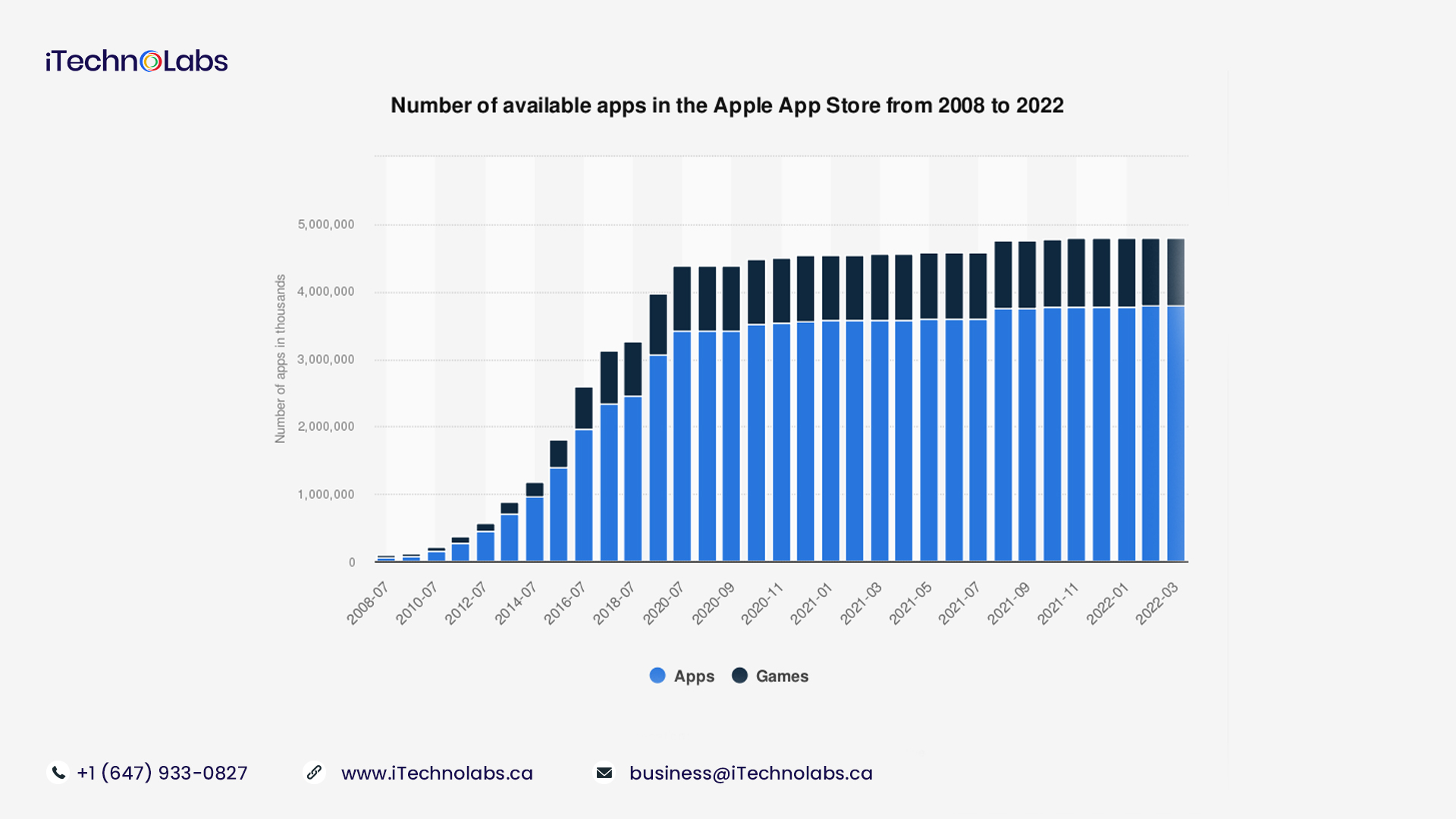 The rise of iOS as the platform of choice for developers worldwide can be attributed to several factors. The extensive development of iOS apps was prompted by factors such as the simplicity of app development, the high-profit potential, the unified user interface, and a generally minimalistic design, to name a few. A uniform user interface also limits the potential for fragmentation issues.

Hiring talented iOS developers with good expertise in mobile development is the most crucial step in designing an iOS app.

In detail, we will cover the top 10 abilities you should look for when you hire iOS developers for your team. 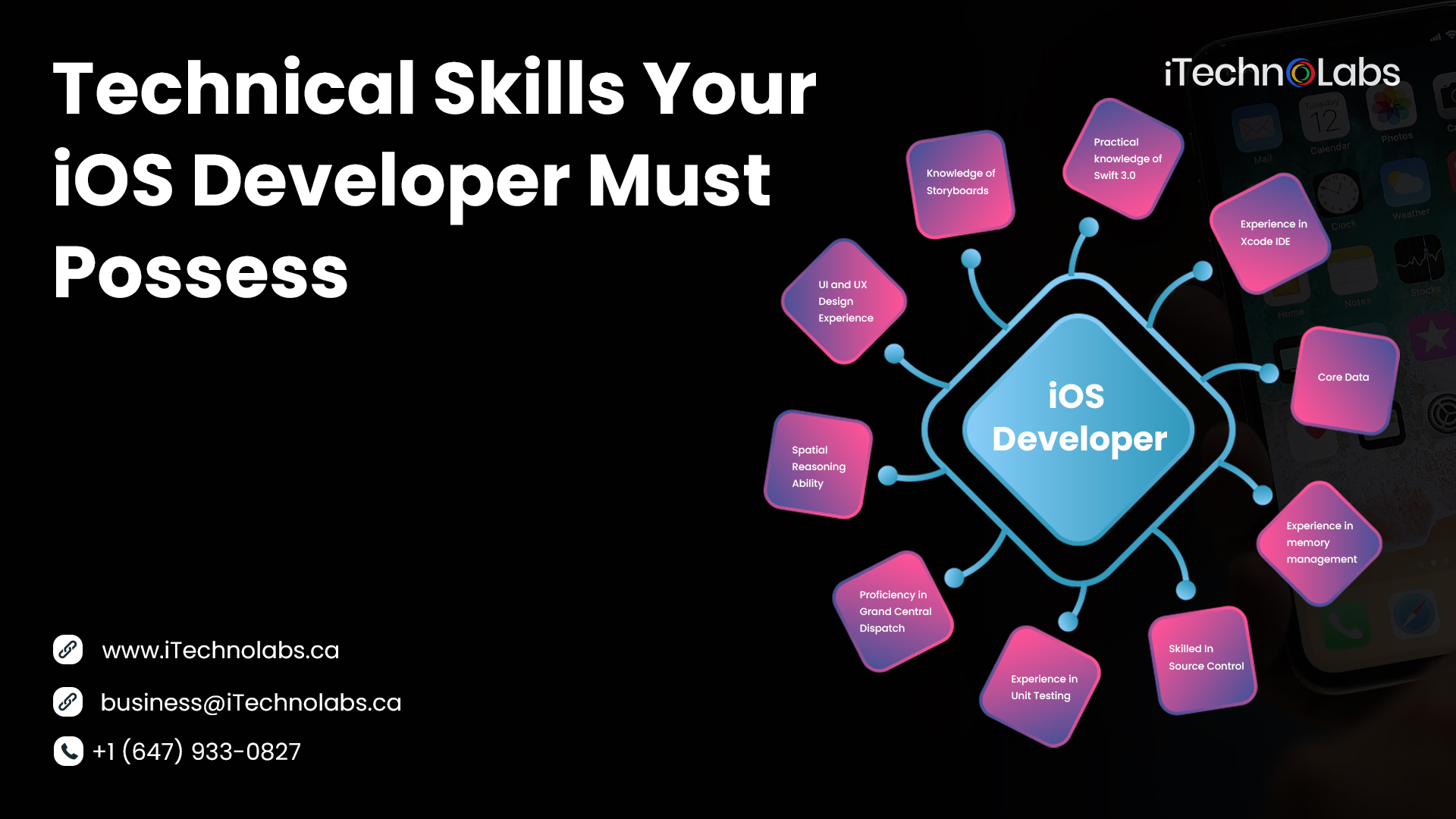 The most widely used language for creating iOS apps in Swift 3.0.

Swift allows iOS developers the freedom to create responsive and feature-rich iOS applications quickly because of its speed and stability. It is also open-source and simple to learn.

Any iOS developer you recruit must have a thorough understanding of Swift 3.0. Additionally, the iOS developers you hire must have previous language experience.

IDE or an integrated development environment are key qualifications when hiring iOS developers.

An IDE comprises tools and programming necessities for automation, debugging, programming, interpretation, and compiling to make developing software or mobile apps easier. An IDE’s resources streamline the development and deployment of newly produced and existing apps.

Additionally, an IDE offers a fantastic user experience, cuts down on costs, and speeds up iOS app development. When hiring iOS developers, search for qualified developers in the Xcode IDE.

A framework called Core Data makes it simpler to create data-driven apps. It makes it easier to manage model objects and their connections. As a result, the iOS developer is freed from repetitive tasks related to object lifecycle and graph management.

The amount of code a developer must create to support the model layer is greatly reduced by Core Data. Core Data is a tool that iOS developers can use to cache temporary data, provide capabilities to an app, and save application data for offline use. When syncing across many devices in a single iCloud account, Core Data automatically mirrors the schema to a CloudKit container.

Employers should look for iOS developers with experience with Core Data to create customer-focused applications.

The hardware your device uses to store data is called memory. An iPhone or iPad’s main short-term memory system uses inbuilt RAM to store data temporarily. This allocated RAM is chosen dynamically by the device’s operating system. Memory on iOS devices is a limited resource, so memory management is essential.

The system only allows apps a limited amount of memory access, which might make them run slowly and finally crash.

A seasoned iOS developer knows that if the software exceeds the predetermined per-process limit, it may become unusable. This is why it’s crucial to work with iOS developers with a strong memory management understanding because it’s essential for creating fruitful iOS applications.

A system management technique called source control is used to keep track of source code modifications. Conflicts amongst developers who are working on the same application are avoided thanks to this strategy.

It is crucial to the creation of applications. iOS developers may cooperate and speed up the development process by getting practical experience with source control. Employ iPhone app developers with experience leading and cooperating in teams.

An app’s functionality is tested with a unit test. A good unit test only checks one element at a time and is quick and isolated. One unit test might be written, for instance, to ensure that the new functionality of a calculator app you were working on accurately estimates the total amount of time spent on activities. To identify any issues as soon as feasible, you should run this new test immediately after creating your most recent code changes.

Unit testing can aid in bug prevention. Using various sets of provided inputs, they verify that each function in an application produces the desired results to test its functionality.

iOS applications perform various functions simultaneously, such as retrieving information from the network, displaying pertinent data on the screen, and responding to touch actions. The hardware of the gadget may be severely strained as a result.

Grand Central Dispatch is utilized in iOS to add concurrency and parallelism to the operating system, allowing the execution of demanding computational processes in the background without degrading the user experience.

Employ iOS developers who are skilled in GCD, regardless of your requirements. To avoid a crash and slow down the phone, developers should concurrently build many apps. This enhances the user experience.

Spatial thinking skills are one of the key requirements for an iOS app developer. The ability to comprehend and manipulate objects at different scales is known as spatial thinking. How will the user use this app? is addressed. To create powerful and user-friendly apps, you must employ iOS developers who understand the user’s perspective.

The developer must consider all the variables to create an unmatched user experience. Hence this skill has a lot of weight in their skill set. Make sure the iOS app developers you choose take the user’s perspective into account. This will enable them to create interfaces with higher usability and features.

The visual components of an iOS application are their area of expertise for UI/ designers, also known as “user experience design professionals.” The design, look, feel, and navigation enhances an application’s overall appeal.

The design of an app must consider UI and UX. UX involves things like navigation while UI handles appearance. These components can aid in enhancing the user experience because they have a significant impact on how the app looks and feels overall. You must work with iOS developers knowledgeable about UI/UX aspects if you want to create an effective iOS app that is also visually appealing.

To produce eye-catching designs, you should employ iOS developers who have a basic understanding of design principles.

An iOS application storyboard is a diagram that displays the user interface screens and their relationships to one another. A view controller and its views make up each scene in a storyboard, and segue objects, which stand in for screen transitions, connect them.

Hire iOS engineers who have sufficient Storyboard knowledge. Making the software simpler to use is crucial, after all.

When businesses hire iOS developers, they must search for the aforementioned technical talents. To find a capable and innovative iOS developer, it is essential to look beyond technical abilities and consider soft talents concurrently. 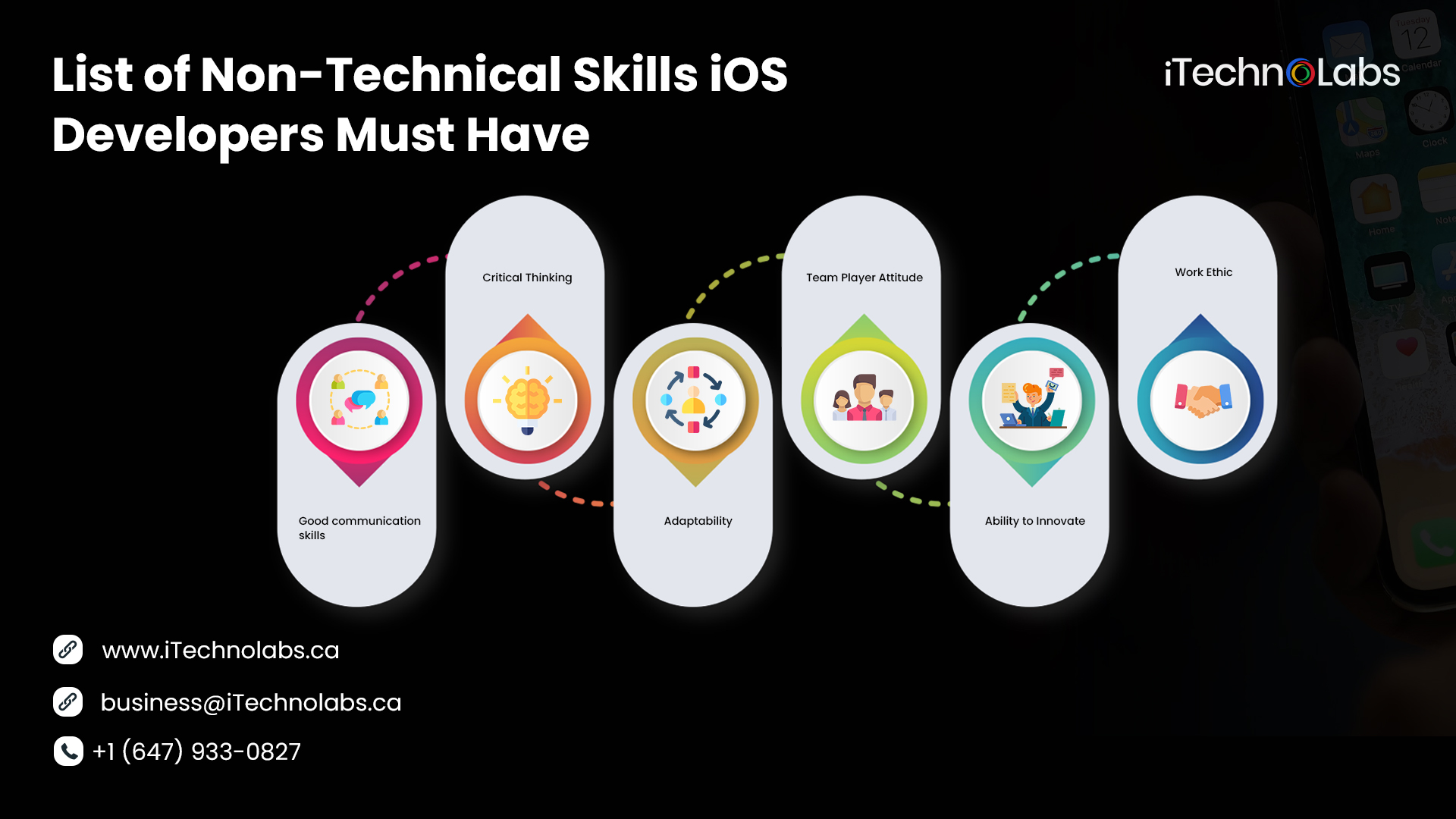 Only their technical prowess comes to mind when we think about iOS developers. However, the developers’ success is greatly influenced by their non-technical and soft talents.

Additionally, developers with the proper mindset and business ethics guarantee the timely delivery of the projects and take accountability for their deeds. Therefore, while hiring iOS developers, businesses must seek the following qualities.

The following are the crucial non-technical abilities that iOS developers need to have:

iOS developers must communicate with clients and other team members to reach the intended result jointly when working on a project.

Without question, effective verbal and listening abilities are essential for iOS developers. Make sure the iOS developers you choose have good communication skills. This quality helps the developers provide a different scenario with a better result in addition to helping them grasp the requirements of the project or client.

Every work has its share of difficulties. Additionally, creating iOS apps is not a simple task.

To design a successful iOS app, developers must overcome some challenges and barriers. A thorough iOS developer must always approach a problem logically and analyze it to find the appropriate answer. Hiring iOS developers with the appropriate mindset and quick thinking can be quite helpful in emergencies. Critical thinking of this kind might also result in business expansion.

The technological world continuously introduces new trends, resulting in the constant workplace change. Therefore, it’s crucial to adjust to the shift and proactively learn how to handle it when things don’t go according to plan.

This strategy, however, does not imply capitulating when faced with difficulty. Hire iOS developers who can adjust to a constantly changing environment and learn how to incorporate such changes into your app to make it more appropriate for the circumstances.

A collaborative effort is necessary for the creation of an iOS application. As an iOS developer, it’s not enough to be a team player; one also needs to be an effective communicator who understands how to bring out the best in others.

Even though some people have trouble working in a team, preserving the team’s dynamics is important. Therefore, when deciding to hire iOS developers, seek developers that can utilize their individual and team talents for the benefit of the company.

Not all customers are clear about what they want as the finished result. And occasionally, things get lost in translation. Or there is a good likelihood that your service cannot fulfill your client’s demands.

In these circumstances, iOS developers must be creative and create the greatest application possible that is both user-friendly and profitable. Finding and hiring creative iOS developers who can provide a thorough evaluation to assist you in separating the best from the rest is not always simple.

Compared to the job’s important facets, having a strong work ethic may appear insignificant. Examples include being on time, organized, meeting deadlines, and focused. However, they are significant and demonstrate the iOS developer’s attention to detail.

A disciplined and concentrated approach will aid in achieving superior results whether working alone or in a team. To secure a cultural fit and growth, businesses must hire iOS developers with a professional work ethic.

Are You Looking to hire iOS Developers for your Mobile App Development? 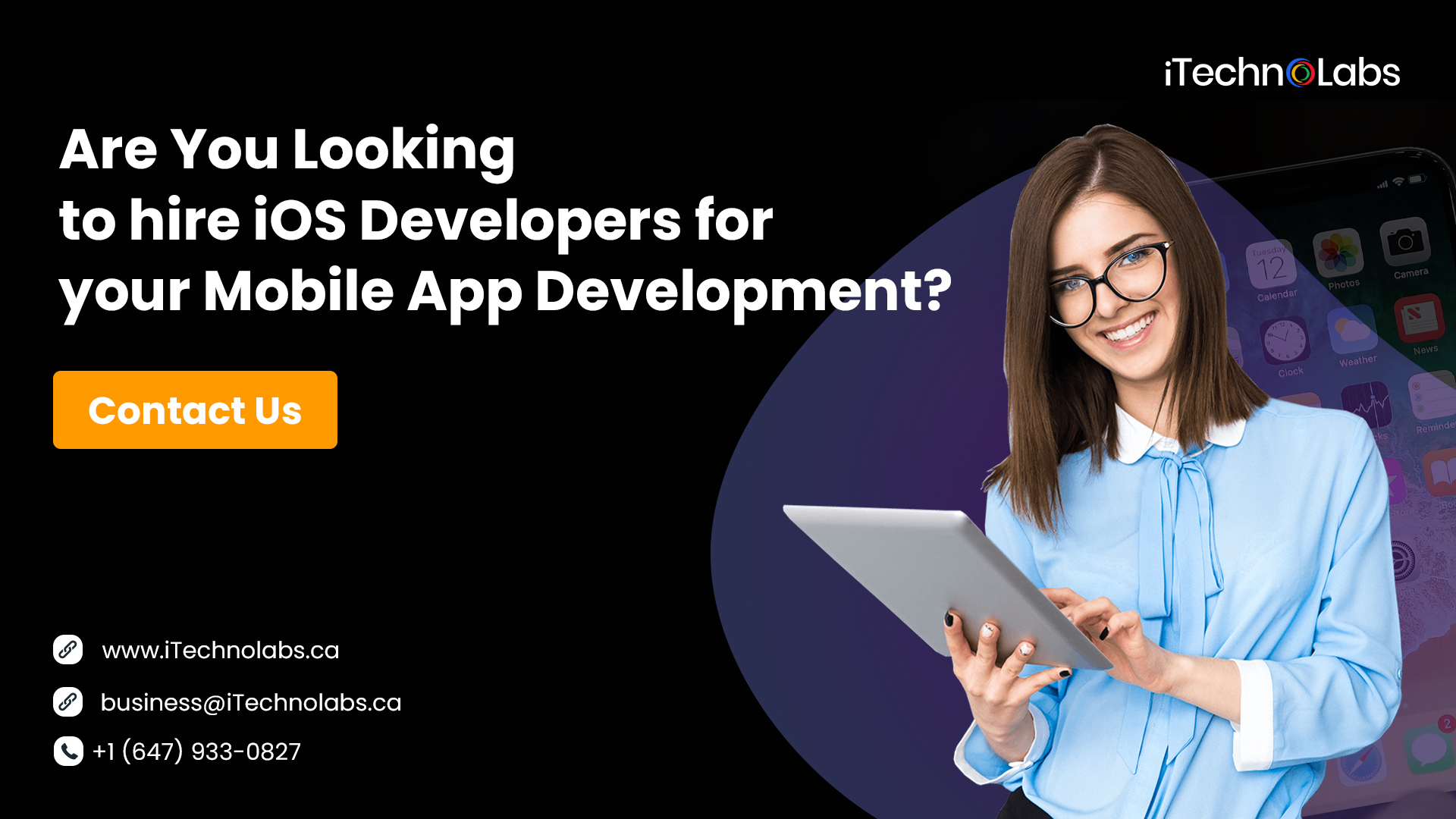 At each stage of creating an iOS app, iOS developers are crucial. iOS developers are responsible for the smooth running of the entire project from start to finish, from gathering client requirements and planning to developing a scalable UI and integrating all elements.

Consider all the necessary technical and non-technical talents to find the best iOS developer because their employment is essential for app development. iTechnolabs have some excellent iOS developers if you are actively looking to employ some.

Therefore, use iTechnoLab to establish your ideal engineering team and hire iOS developers!