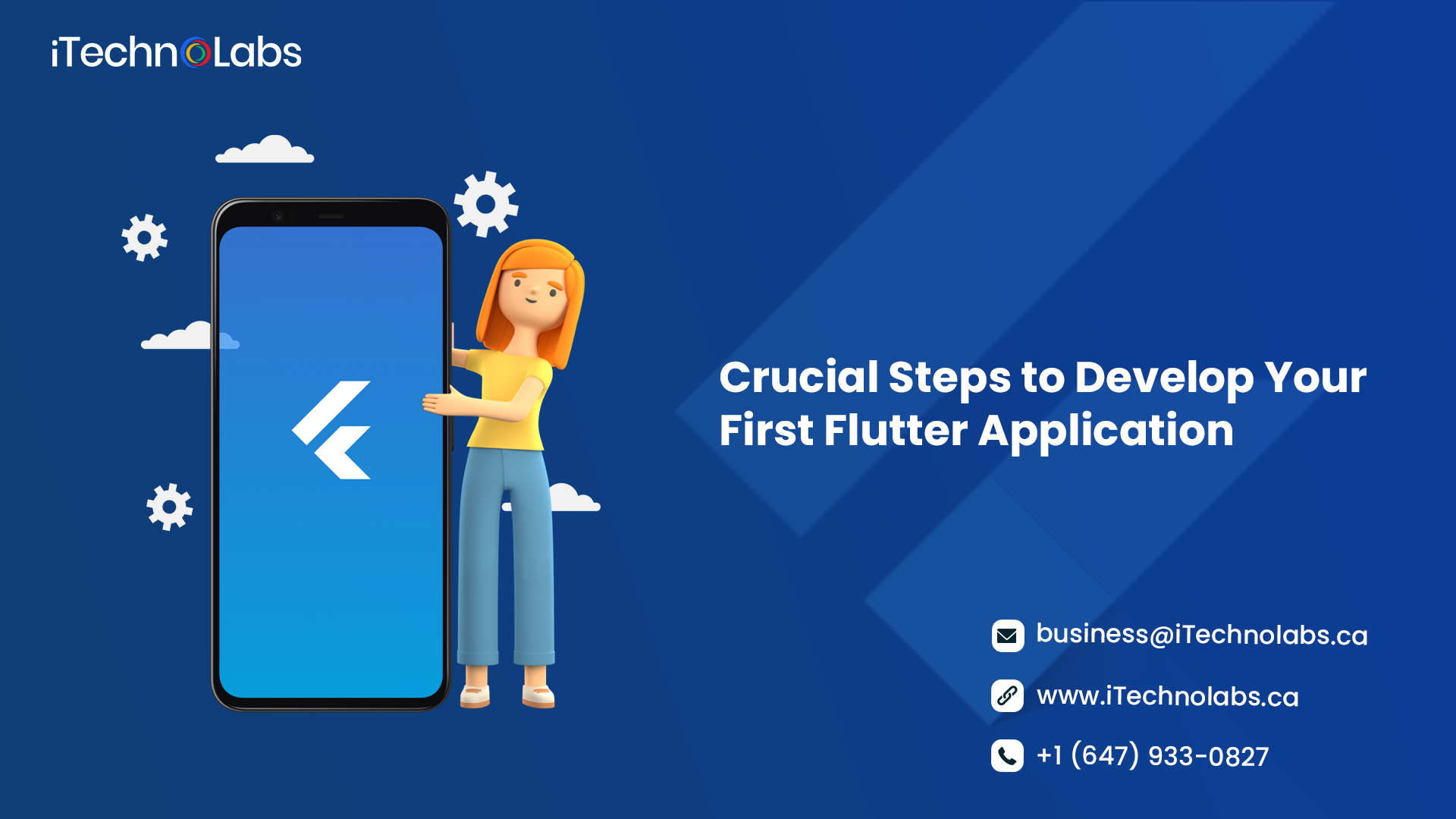 Cross-platform mobile development represents one of the most well-liked emerging trends in 2022. As it empowers businesses to release mobile apps in a timely manner, the capability to develop native applications for Android and iOS from a single codebase has become more and more in demand. The next must-know mobile development technology in 2022 will be Flutter, which is quickly catching up to React Native, which has already become something of a “mainstream.”

Businesses can quickly reach clients thanks to mobile apps. On the other hand, people who live in a technologically advanced society like having access to everything. As the need for mobile app development grows, uncertainty about the best technologies to use to produce thunder-like fast apps spreads. After all, you must outperform rivals in the market. In order to address these issues, Google created the cross-platform Flutter app development kit and user interface framework in 2018.

Almost any service or activity may now be linked to something like a smartphone, from managing budgets to discovering your partner in life to monitoring healthcare. Growth-oriented businesses are aware that, in order to increase sales and foster continuous customer engagement across all mobile platforms, digital transformation is no longer an option but rather a necessity. They also understand that the more of an advantage they have over the competition, the quicker they can release an app that generates income.

Before getting into the crucial steps to developing your first application on flutter, let’s get to know more about flutter and the future of this platform.

On May 17, 2017, Google released Flutter with the goal of enabling developers to quickly construct stunning, aesthetically pleasing, cross-platform applications using a single code base. Professional app developers are obligated to create additional features without sacrificing the desired level of performance or speed. Flutter simplifies the process for app creators to create exceptional applications.

It makes use of the Dart programming language from Google. Dart is similar to JavaScript in several ways and has a basic syntax, making it easy for mobile developers to comprehend.

The single most important thing about Flutter is that it eliminates the need for months-long language and framework learning. With Flutter, creating mobile applications has never been simpler. Primarily because it provides you with a high-end software kit that includes all plugins and widgets. Creating an application with Flutter is nothing more than an intriguing story for a product owner. 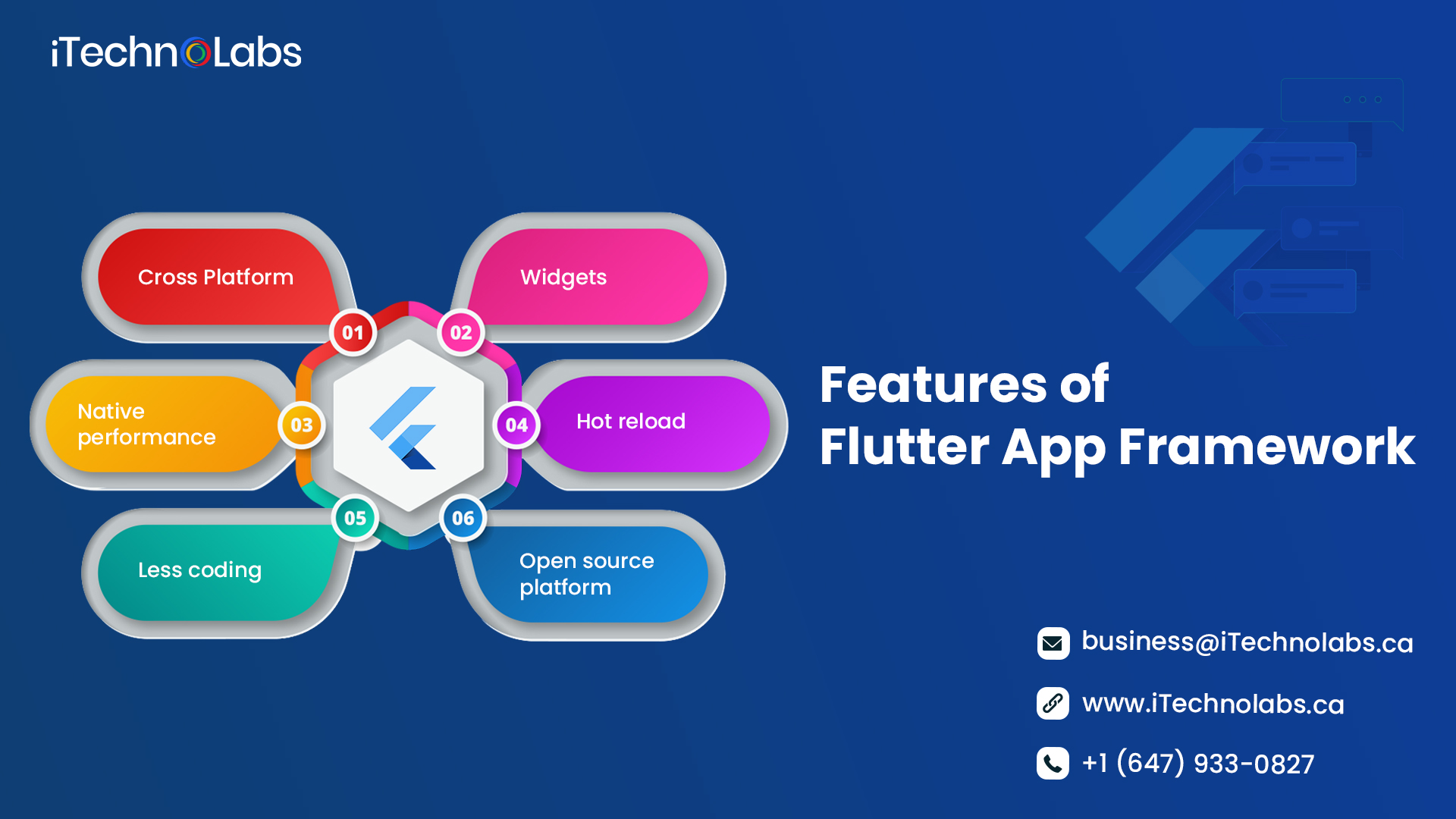 Companies are beginning to engage in cross-platform development of mobile applications in order to design apps on a tight budget. The native mobile app development is excellent, but it costs more because it takes two different teams with expertise. The widespread use of the Xamarin and React Native frameworks is a fantastic illustration of how businesses need to find affordable ways to develop mobile apps. Flutter was not really currently participating. However, since Google released a stable version of the framework and big businesses started using it, iOS and Android developers are starting to take notice. Flutter distinguishes itself from other cross-platform solutions with a few key features.

The following are some of the features of flutter that are different from other mobile application development tools.

In the competition to construct cross-platform mobile apps, Flutter has created a powerful entry. It has been designed specifically to make it possible to create captivating, natively built applications from a single codebase for mobile, desktop, and the internet. It can be employed in mobile development to create programs that run on both iOS and Android. Furthermore, Google Fuchsia, the company’s forthcoming smartphone OS, is integrated. Because Fuchsia also makes use of the Dart programming language, learning the ideas of Fuchsia will be easy for Flutter developers.

Complicated widgets can be made by Flutter and then adjusted to accommodate the requirements of the application. There are also accessible built-in widgets for use. The numerous menus, fonts, forms, colours, buttons, and another interface styling, structure, and substructures are defined by widgets. To create more intricate elements, they can be combined and adjusted. Furthermore, custom widgets can be made entirely from scratch.

Flutter gives you the power to access native capabilities that are platform-specific using your existing Java, Swift, and Obj code. The use of native language features, such as cameras and location, gives you the comfort of operating in your own language and allows you to access both the Apple and Android ecosystems’ native features.

With a hot reload, it is possible to observe modifications made to the code immediately displayed in the user interface. This expedites the procedure of working on the application’s perspective. The modifications performed by the developers are immediately visible. Because it enables the modifications evident in the app immediately, this feature is incredibly helpful for developers. Developers can quickly repair errors because the adjustments they make become evident in a brief amount of time.

Dart is an object-oriented programming language that is used by Flutter. Since this supports hot reloading, it is not necessary to code a totally new program whenever adjustments are made. Flutter is reactive and declarative since it resembles React Native just a little bit. The hot reload feature of Just-In-Time enhances the development system. It updates the user interface without making an effort to create a new one.

Flutter was made publicly available as an open-source platform by Google. To construct Flutter applications, developers can experiment with a variety of design alternatives. Material Design and Cupertino widgets can be used to make user-friendly applications. Flutter Form is a group of Flutter enthusiasts who meet together to talk about and address questions about the framework. Online forums and comprehensive documentation are available for Flutter, which is complimentary.

What are the Steps to Develop Your First Flutter Application? 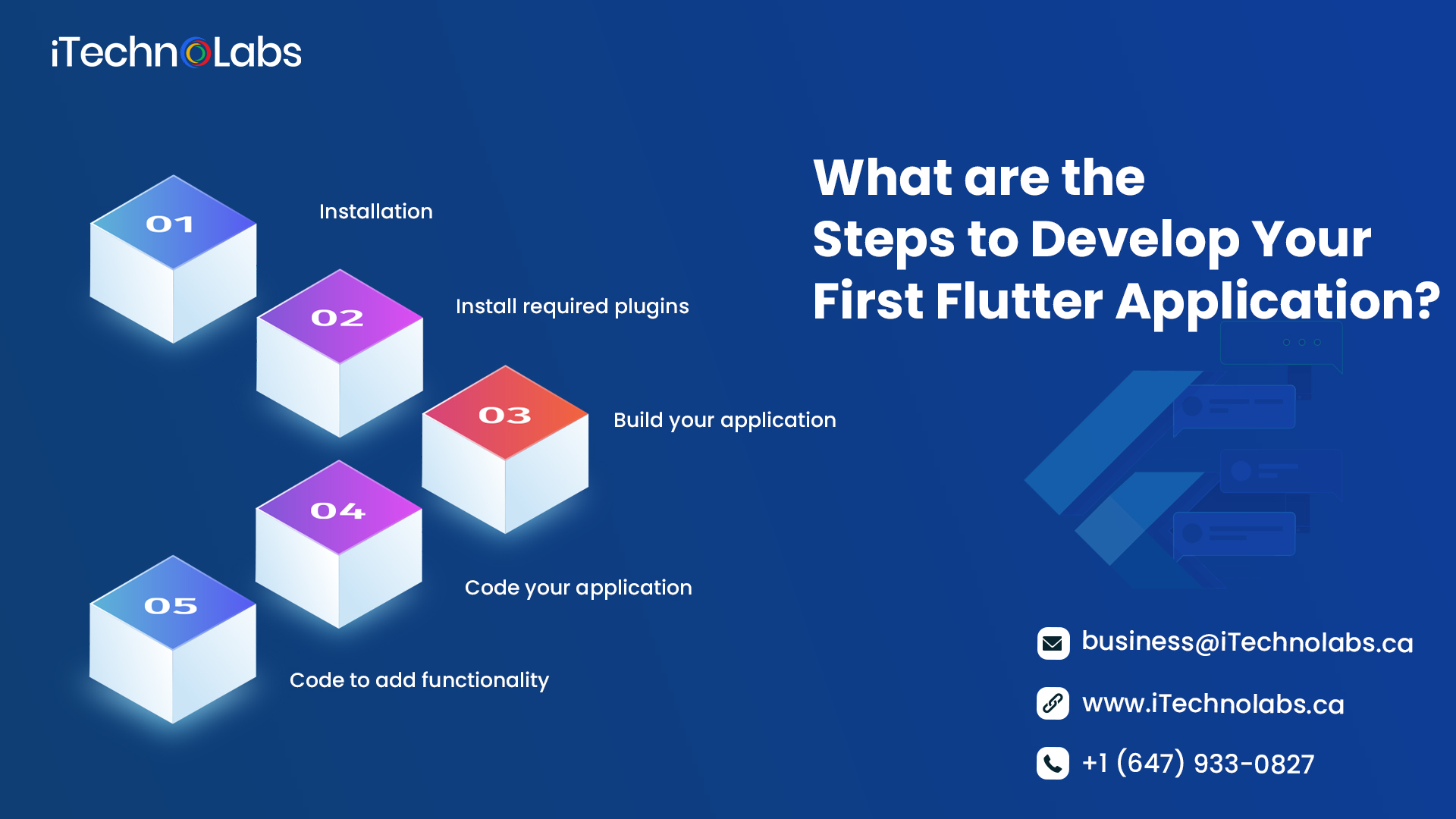 Considering you are now pretty much sold on Google’s development, let’s move on to what are the crucial Steps to develop a flutter application.

The Flutter setup guide is quite informative and contains comprehensive instructions on how to install Flutter on each OS, including Mac, Windows, and Linux.

Install Flutter and set up your development environment according to the editor you intend to use to create your Flutter app. Flutter provides a plugin and support for a number of editors, including IntelliJ IDEA, Android Studio, Emacs, and Vscode.

You can install the necessary plugins for developing Flutter apps after setting up your IDE.Go to the Plugins panel in the settings of your loaded IDE, then select the Marketplace tab. Now click Install after searching for Flutter. Install Dart if you see that alternative as well. If not, you must explicitly install it.

You must choose the Flutter Application> Start a New Flutter Project> Android Studio in order to start a new flutter project. After selecting the Flutter Application, you will indeed be prompted to enter the Flutter SDK path and some basic project information on the following screen. Lastly, give the package a domain name. It’s crucial that you give the package a distinct name. You can use com.github.your username> if you don’t have a domain. Keep the other settings at their defaults, then click Finish to confirm.

Considering that you’ve previously started a project called Random App. Most app developers modify lib/main.dart, where the Dart code is located after they begin creating the app. You have two options: either change the code in lib/main.dart or completely remove it. Replace all of the existing code with the following code, which centres “Random Gallery” on the screen.

Finally, guess it depends on your devices, run the app by following the instructions in step 3 and using the recommended Android or iOS IDEs.

By incorporating distinctive functionality into your project, including such database services to manage and store data; creating RESTful APIs; and moving beyond an example Flutter app, you must now advance beyond it. UI design and security compliance.

Therefore, be sure to adhere to established practices when developing scalable and effective apps.

Do You Want to Develop Your First Flutter Application with iTechnolabs? 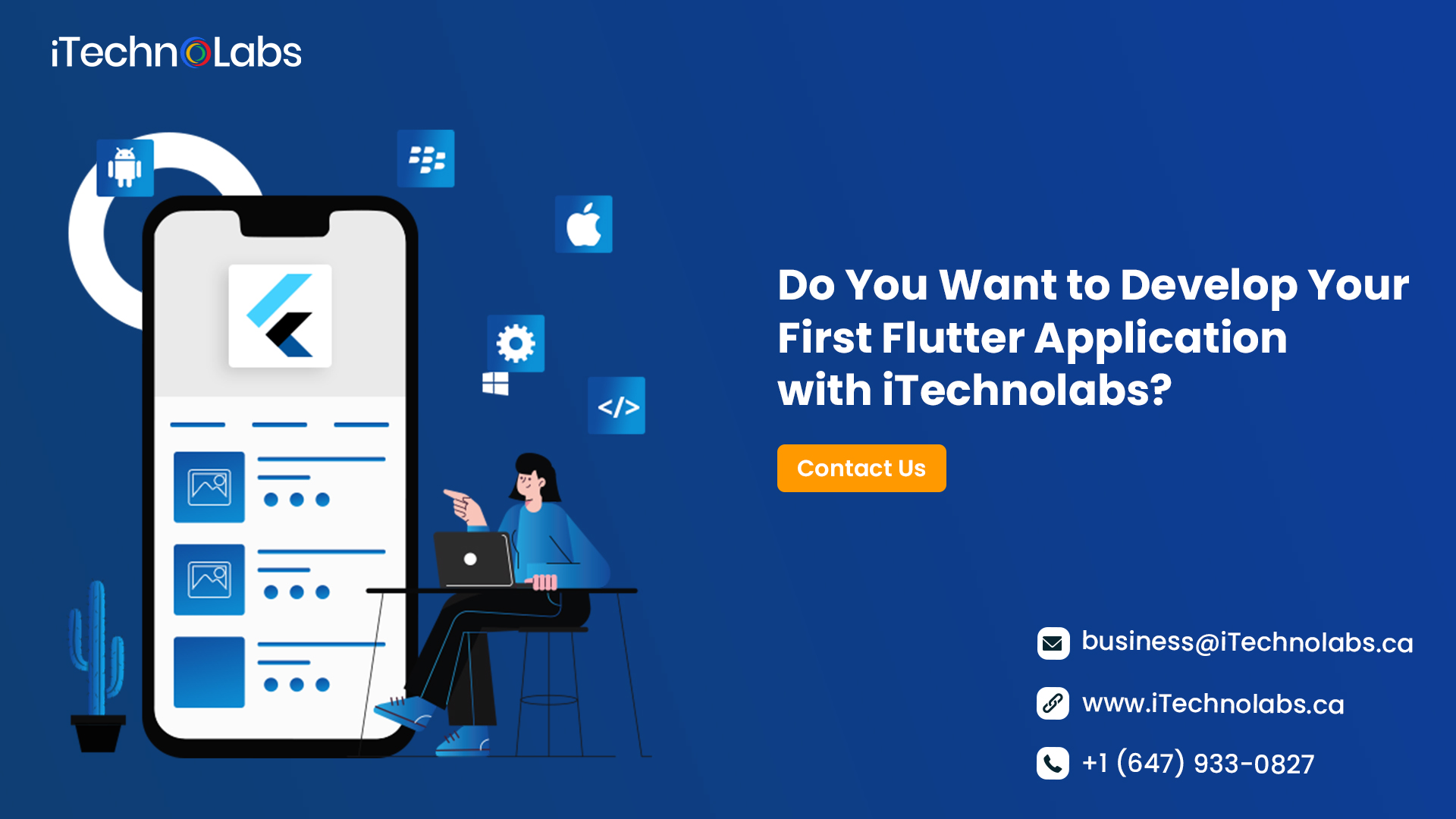 We have discussed the most defining features of flutter and the crucial steps to create your first flutter application. Amongst the most cutting-edge mobile technologies available is flutter. It has some restrictions, much like every innovation. However, its numerous advantages clearly outweigh the minor drawbacks, and Google’s support makes it a formidable contender to quickly rule cross-platform mobile app development.

Starting your project could look simple, but the functionality and features of the code are actually tough. You must thus have previous expertise creating websites and mobile applications. It is far preferable to engage experts to create your Flutter app if you lack any app development experience.

We at iTechnolabs can absolutely assist you if you’re looking for skilled Flutter developers to hire. We support you with the most recent technological advancements in Flutter in addition to ensuring high-performing native-like Flutter apps.