What is the Future of Mobile Application Development? Low-Code and No-Code Platforms

What is the Future of Mobile Application Development? Low-Code and No-Code Platforms 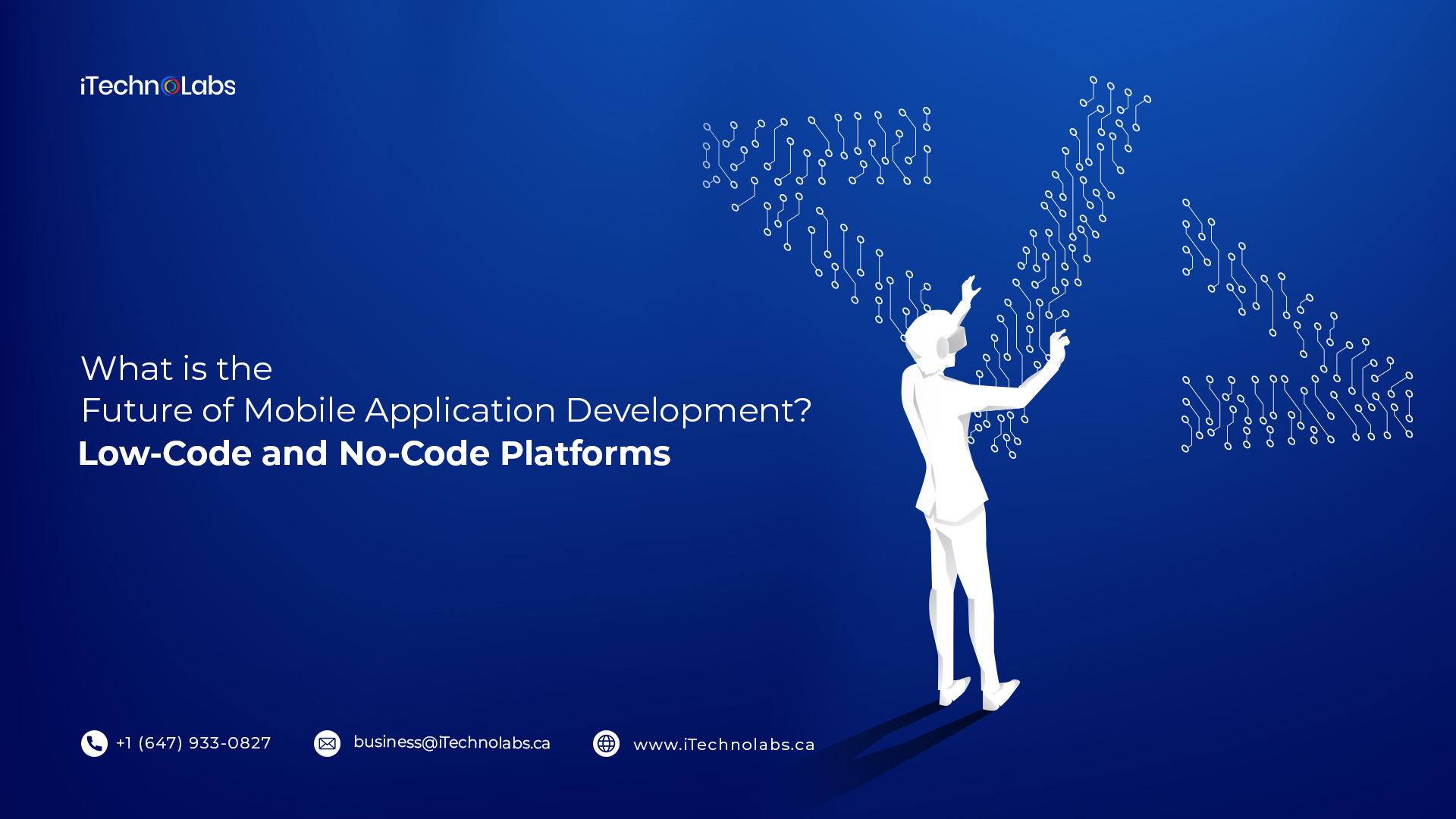 Businesses are concentrating on apps that connect with wearable technology to provide information in creative ways (due to best android application development companies India ). A wide range of goods and services in sectors like sports, fitness, fashion, hobbies, and healthcare will be significantly impacted by this.

Nowadays, cellphones are so common that it’s simple to forget that mobile apps are very new. Since the first mobile phone was developed in the early 1970s, mobile app development has seen numerous revisions, drastically altering our way of life.

How has the development of mobile apps changed over time?

Although the first handheld mobile phone was created in 1973, it took another 20 years before the first cell phones that were widely available began to lay the groundwork for modern technology. The first phone featuring a touch screen and integrated apps, such as a contact book and calendar, was IBM’s Simon, which was unveiled in 1993.

The Blackberry 5810 with Java support followed in 2002. This revolutionary technology paved the way for the quick creation of mobile apps by integrating apps like linked wireless email. Java is still the main programming language used to create Android-based apps today.

Google and Apple both introduced online app shops in 2008. Just nine months after its debut, Apple’s App Store had one billion downloads.

What are the new trends and technologies in Mobile Application Development? 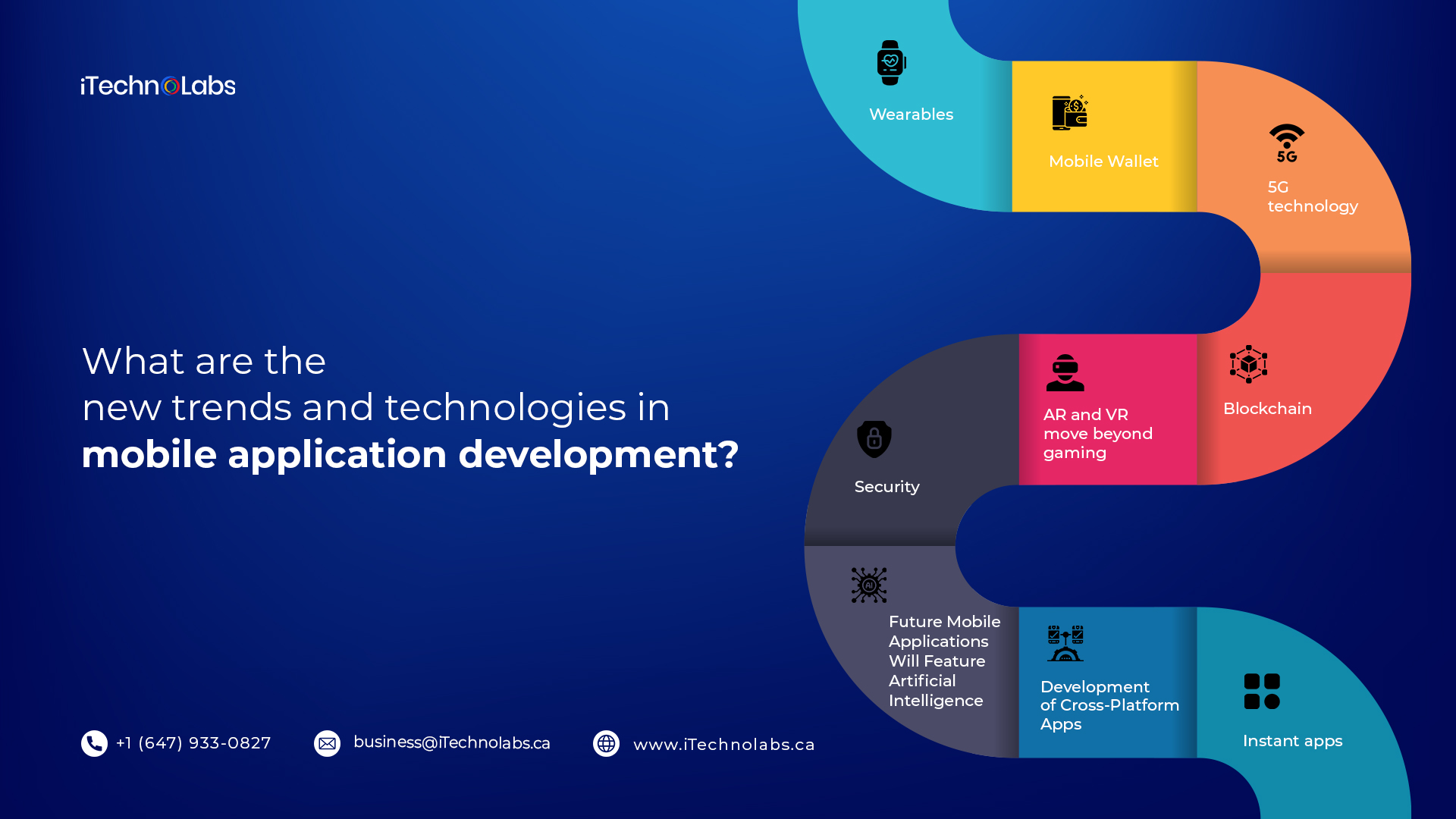 There are some trends and technologies that we have to discuss:

Everyone is dressed out in the newest wearables whether they are at the gym or riding the subway, as wearables have taken the world by storm. After that, advancements in space were made possible by the Apple Watch and AirPods. Today, each brand has its own line of smart earphones and watches. These are capable of doing everything from guiding you to your destination to making calls for you when your phone isn’t around.

The epidemic altered our way of life and compelled us to switch to a digital-first existence. Nowadays, everything is done online, including paying for services and food. Online payments have been streamlined and made available to anyone thanks to mobile wallets.

Service providers will work hard to improve and secure their goods as we embrace online money transfers. When it comes to the creation of mobile wallets, one of the main concerns is the security of funds and transactions. Since social isolation has been the new norm since the pandemic, contactless payment systems like Apple Pay and Google Pay provide a remedy. Security and ease of payment will propel innovation in this industry to become a crucial mobile application trend in the future.

The environment of app development is expected to change as a result of 5G wireless technology. In addition to offering unimaginable speed, 5G holds the secret to living a lavish life in the future.

In addition to enhancing network speed, this advanced technology will revolutionize 3D gaming, AR/VR, data security, and other aspects of apps.

Different apps, such as smart cities, IoT, supply chain, AR/VR, transportation, etc., can benefit from this technology in a variety of industrial verticals.

According to forecasts, by 2025, worldwide blockchain revenues would increase by roughly $39 billion.

The way apps are created and used will change as a result of blockchain integration solutions.

Initially, the reliable operation of all cryptocurrencies was the main claim to fame of blockchain technology. It is now utilized as a database for practically all apps, including those in the banking, retail, health, and other categories.

It is a decentralized ledger that aids in keeping track of transactions between different parties and is shared with all stakeholders. As it prevents fraudulent transactions and forbids any changes to the transactions once stakeholders are aware of it, this promotes system transparency and increases app security.

5. AR and VR move beyond gaming

Using augmented reality (AR) technology, players may play Pokémon Go while strolling through their neighborhood. AR superimposes artificial pictures and objects on real-life things. Virtual reality (VR), on the other hand, fabricates a setting. Users of Meta’s Oculus Quest 2, for instance, can attend concerts made in an immersive world, travel to new places, and exercise all from the comfort of their living rooms. However, AR and VR are no longer just for video games; these technologies are quickly entering new markets including retail, real estate, and tourism.

With the help of an unexpected catalyst called COVID-19, the application of augmented reality technology in the real estate sector is exploding. After the pandemic, many people found it unsafe to attend open homes in person. In response, quick app development was beneficial.

Concerns over consumer privacy and security are growing as more personal data is shared online. Consumer fears about their personal information being shared are not unfounded. Although consumer data is routinely collected to improve services, especially in use cases using AI and machine learning, consumer concerns are not unfounded.

In a recent analysis of well-known Android apps, Synopsis discovered that 63 percent of them featured open-source parts with known security flaws. Because of this, a lot of customers are vulnerable to having their information breached or stolen, which may harm their app experience or undermine their trust in it.

To assist in resolving security challenges like these, two technologies are emerging. One is biometric authentication, which verifies a user using voice, fingerprint, eye, or other biometric data. This contributes to the initial line of protection against theft or fraud.

In 2021 and beyond, AI will continue to be a trend in app development. Since this technology creates more individualized app experiences that cater to the demands of the users, it is essential to the process of developing apps. Revenue from the global AI software industry is expected to reach $70.94 billion by 2023.

We anticipate that a variety of AI applications will be created in the future employing tools like predictive analytics and machine learning techniques. By studying users’ prior behaviors and usage patterns, app developers will be able to provide a more personalized experience and enable AI to carry out necessary operations without being asked.

Face detection, speech recognition, image recognition, text and image classification, predictive maintenance, and other functions may be included in apps with AI capabilities.

Although the trend toward mobile apps has already gained traction, cross-platform development will become increasingly important to organizations.

Before the competition does, you want to expand your reach when you first launch a business. You might spend a lot of money developing an iOS or Android app separately. Spend money on mobile app security as well. Additionally, it will boost business expenses, which you might not be able to afford in the beginning.

Cross-platform mobile app development is a fantastic place to start because of this. No matter the device or platform that your consumers use, you will be accessible on all of them and able to provide a comparable experience.

Instant apps are the future of mobile app technology. Most people safeguard their phone memory by not downloading the app. This reduces the user base and in turn the profits for your app.

By creating apps like this, you can allow users to access the content without downloading it to their mobile devices. During the mobile app development process, developers will use deep linking that ensures the user’s details are recorded without impacting their disk space.

Low or No coding development

You no longer want to rely on a developer to get started if you want to make minor adjustments to your current application or produce an MVP. Once the MVP has been authorized or your concept has been proven, you might want to collaborate with someone.

Future app development will be governed by no-code platforms since they facilitate speedy collaboration and drag-and-drop creation. To get started, you don’t need any prior knowledge of technology or computer languages. 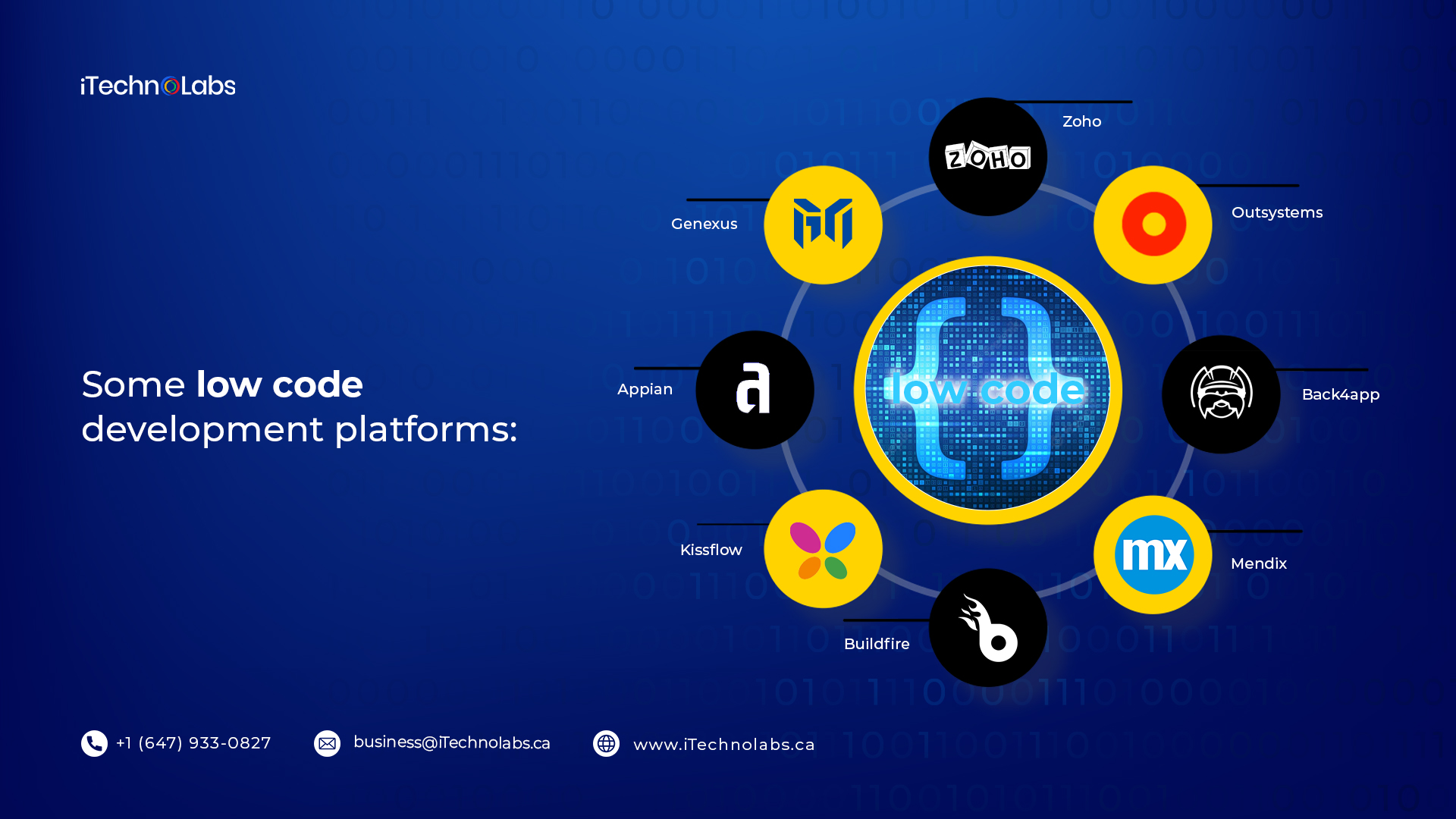 Examples of No code app builders 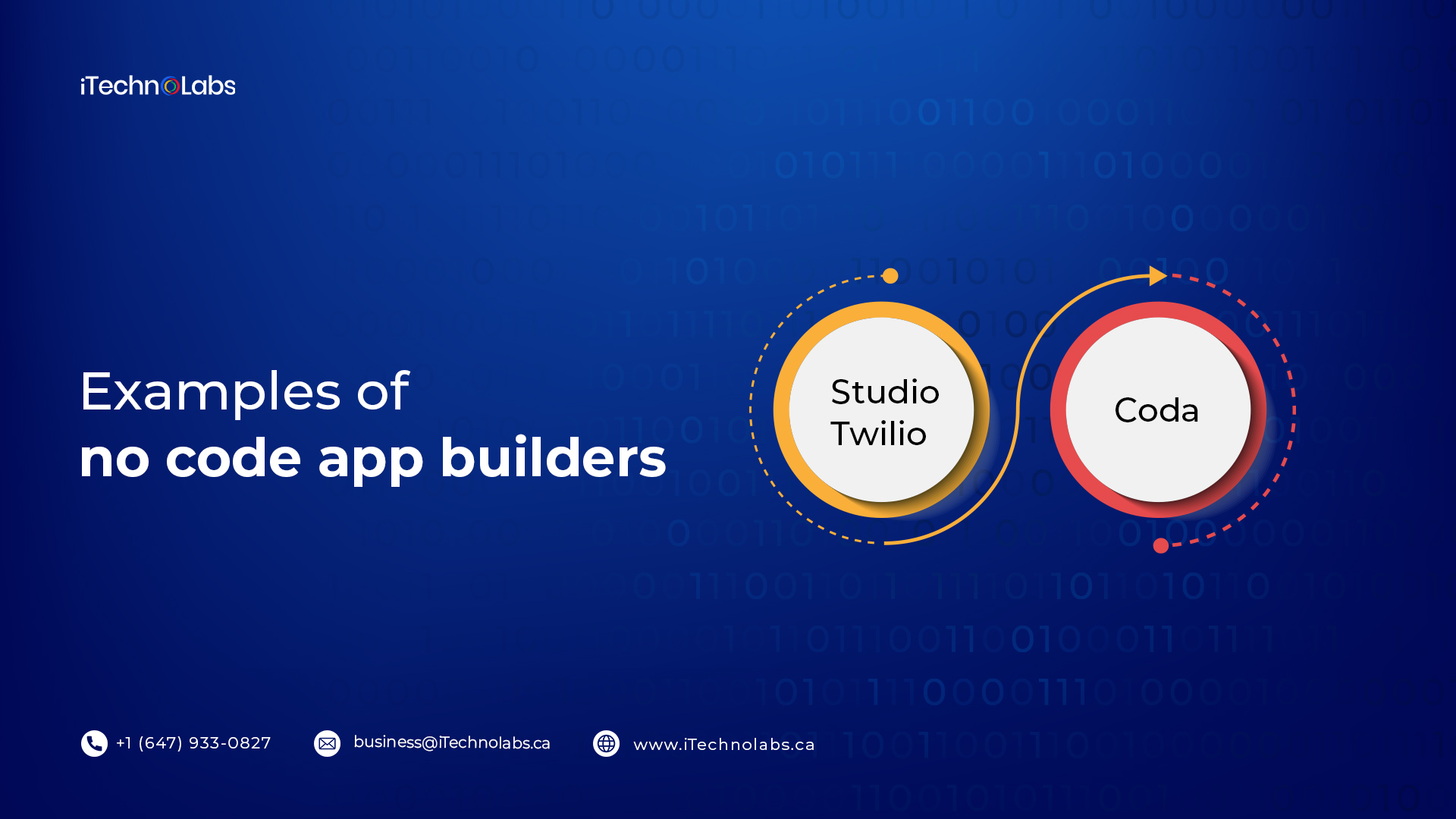 This straightforward drag-and-drop tool may be used to create autoresponders, appointment reminders, and survey-style mobile applications. It comes with the necessary documentation.

With this drag-and-drop interface, you can create any kind of app you want, including surveys, tests, and more. It reminds me of playing with Legos. With this tool, you can even integrate databases, tables, and spreadsheets.

Are You Looking for a Mobile Application Development Company in the USA? 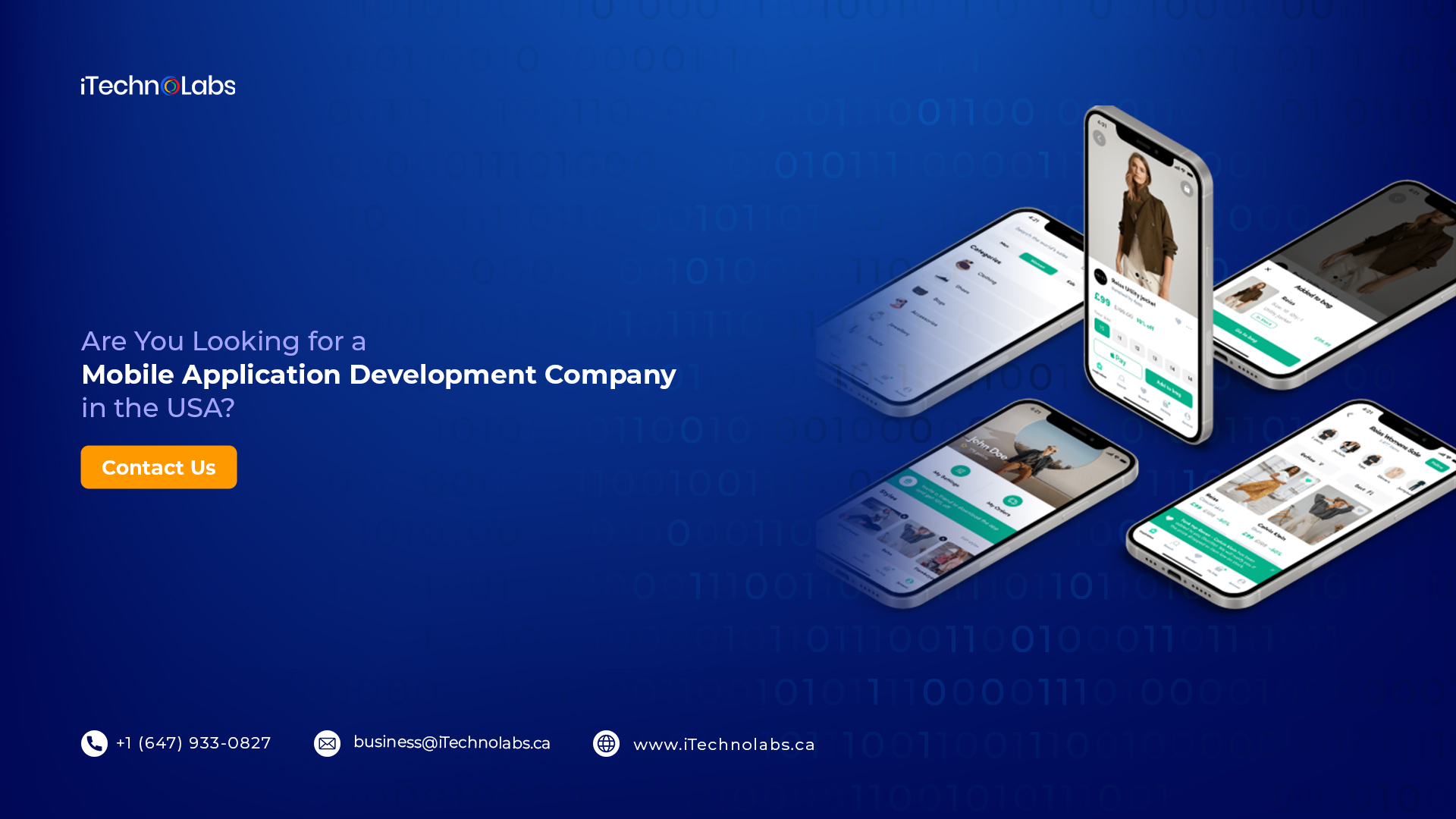 The same way as long-established tech industries did in the past, mobile application development is currently booming. To predict the future of mobile app development or what is still to come, we may use historical instances.

We could anticipate that the development of mobile applications will be exciting and radically distinct from existing technologies. This will make it possible for developers and mobile app development companies to improve things by providing individuals with top-notch, cutting-edge solutions.